Technically, anybody who has swum before has free-dived. The act simply involves diving underwater while holding one’s breath, and it is as old as swimming itself. Free-divers – from the pearl hunters of yore to casual snorkelers today – enjoy access to the aquatic world unencumbered by bulky equipment or lengthy preparation. These, along with […] 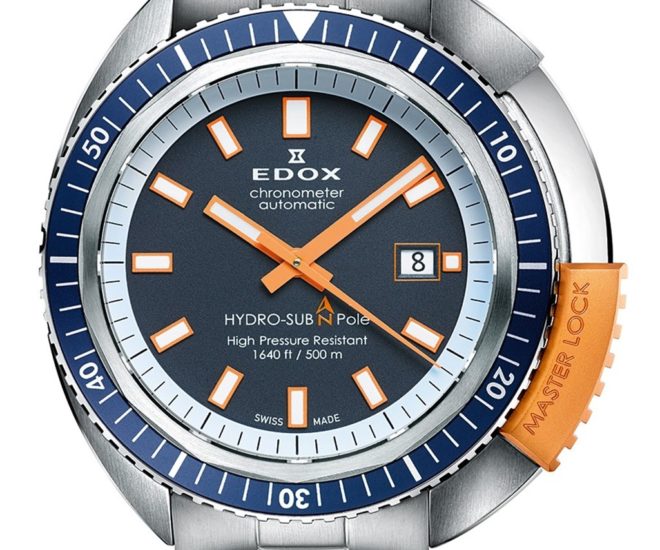 Technically, anybody who has swum before has free-dived. The act simply involves diving underwater while holding one’s breath, and it is as old as swimming itself. Free-divers – from the pearl hunters of yore to casual snorkelers today – enjoy access to the aquatic world unencumbered by bulky equipment or lengthy preparation. These, along with relatively low costs, make the sport an increasingly popular one.

Do not be mistaken though. Despite its age and ubiquity, calling free-diving an extreme sport is no misnomer, especially on the competitive level. The lack of an overseeing body masks fatality statistics; an estimated one in 500 free-divers die annually, making it one of the world’s most dangerous sports. That aside, injuries such as nosebleeds and torn larynxes are also common. With its penchant for extreme sports, including timekeeping partnerships with the Dakar Rally and the Extreme Sailing Series, it is little wonder that Edox wanted to get its feet wet in the world of free-diving. To that end, the brand embarked on a partnership with Christian ‘The Iceman’ Redl in 2011, spawning the Iceman Limited Edition series of watches. As a professional free-diver, Redl eschews the world of competitive apnea, where divers attempt to reach great depths or distances under highly regulated conditions. Instead, he makes less conventional world record attempts, such as distance swimming under ice on a single breath.

Redl is no mere sponsored athlete that’s just tagged to a Swiss watch brand for financial support. As the brand ambassador for whom several limited edition watches have been created, he’s actively involved in designing the watches that he wears. The latest result of the partnership is the Hydro Sub North Pole, which has a sliding crown protector to prevent ice build-up on the crown. It may be an extraneous feature in daily life but a crucial one for his attempt to free-dive at the North Pole in 2015. Redl’s 2015 expedition will see him trek an estimated 100km over ice from northern Canada to the geographic North Pole, before he becomes the first person to free-dive there. The expedition is the first of three, with similar attempts to happen at the North and South Magnetic Poles in 2016 and 2017 respectively. The geographic South Pole is over Antarctica’s landmass, where diving is normally impossible.

Lest anyone passes him off as another foolhardy thrill seeker, however, there is actually a method in his madness – environmental education. Redl hopes to raise awareness about the shrinking polar ice caps that have resulted from global warming, a topic which he says is oft-overlooked back home in Europe. The media coverage of his first attempt next year will be the perfect opportunity to put global warming back in the spotlight, with subsequent attempts sustaining the public’s interest in mitigating global warming

In the following interview with WOW, Redl elaborates on his partnership with Edox and the thought that went into his latest watch, the Hydro Sub North Pole

Why a partnership with Edox?

The most important thing to a free-diver is time. For example, my safety divers use scuba equipment and have time limits. For a depth of 60 metres, they need two minutes to go down, and can stay for two minutes there before needing to come up. So, I have a two-minute window to make my dive. As time is so important, all good free-divers want a watch sponsor. But a sponsor to me is more than a company that gives me a nice watch and money. I need to really identify with the brand and its watches. It must also be good looking for me. Edox’s brand philosophy speaks to me, and I like the idea behind their watches.

What prompted the switch from the Iceman series to the Hydro Sub North Pole?

All the Iceman watches are connected to my world record attempts. Last year, I told Edox that I wasn’t sure if we should continue running the numbers past Iceman 3, and that I wanted to have an expedition to the North Pole. I thought we could use the event to make a special watch. Since Edox would also be having its 130th anniversary this year, this made us decide to make the Hydro Sub North Pole for the expedition.

Were you involved in the design and development of the Hydro Sub North Pole?

Yes. Edox and I put my ideas together into this watch, which is the first which I was completely involved in. For previous watches, I was just helping with the design. This is the first where I was involved in designing its functions. That’s why I’m really proud of this watch: it serves a purpose.

What does the crown protector do?

The temperature of water under the ice at the North Pole is around two degrees, which is no problem. The temperature of the air, however, will be around -30 to -40 degrees, which means that ice will freeze on the crown if it gets wet. If it then hits something, it will definitely break. Since the watch is important as a backup navigation tool in case the GPS and compass fail, I wanted something to protect its crown.

Were there other details that you specified for the watch?

Yes, for the first time we are using a metal bracelet on my watch. I always had to adjust rubber straps underwater as my neoprene suit got compressed. This metal bracelet has a sliding extension which is more convenient. For the North Pole expedition, however, I will use a NATO strap instead. A metal bracelet will be too cold. A NATO strap is also long enough for the watch to be worn over my thick jackets. For everyday use, I like metal bracelets – I prefer my watches heavy.

Do you have preferences for complications in a watch?

I prefer chronographs, to time various events, such as breath holding for my students when I conduct courses. So, I hope the Hydro Sub 2 will be a chronograph.