The Swiss watch industry is in rude health with exports leaping once again last month and watchmakers set to notch up a record year thanks to Chinese consumers Despite the the effect of the global debt crisis, the demand for Swiss watches hit a peak in October, putting smiles on the faces of the country’s […] 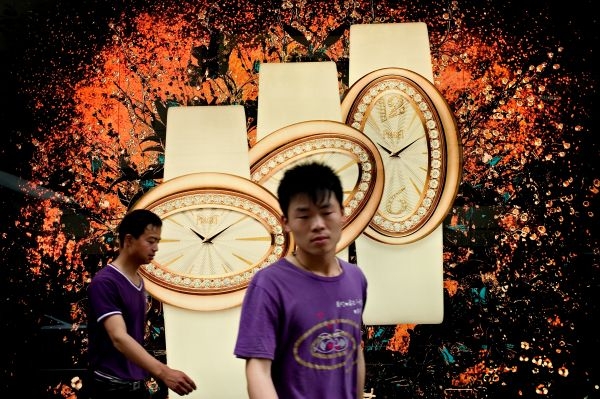 Despite the the effect of the global debt crisis, the demand for Swiss watches hit a peak in October, putting smiles on the faces of the country’s 600 watchmakers.

Data from the Federation of the Swiss Watch Industry (FH) showed exports rose to 1.9 billion Swiss francs ($2.0 billion), up 18.6 percent on the same month last year.

“The upwards trend is clearly continuing … and shows no signs of weakening,” the trade body said.

Switzerland represents 2% of the global market in terms of volume, with 26 million watches sold last year compared to China’s 671 million and HongKong’s 419 million

But the country remains the top world exporter in terms of value, enjoying a more than 50 percent market share, analysts at Bank Vontobel said.

About 95 percent of watches costing more than 1,000 Swiss francs were meanwhile produced in Switzerland.

The domination of Swiss watchmakers in the luxury watch sector was underlined by the October figures, which showed exports of watches priced upwards of 3,000 Swiss francs recording the strongest increase, soaring by 25 percent.

The apparently insatiable appetite of Asian consumers is a major factor in its success, with sales to Hong Kong jumping 18.7 percent and to China 67.8 percent.

Experts at Cygnus Business Consulting expect China to surpass Japan as the number one buyers of luxury goods.

“It is widely thought in China the possession of luxury goods factors a lot in judging a person’s social status”, they said, adding that China’s growing purchasing power was contributing strongly to the demand for luxury products.

Swiss watches are included in that trend and companies have begun investing heavily in China.

The Swatch group, whose brands include Omega and Tissot, sells 49 percent of its watches in Asia according to Vontobel, and is about to open a hotel in Shanghai with a shop showcasing its timepieces.

“It’s not enough that the Chinese have more money, they must also spend it” on Swiss watches, said Jean-Daniel Pache, president of the FH, who said they were attracted by Swiss quality and design.

2011 will be a “record year,” with sales topping 17 billion Swiss francs, he added, while predicting continued growth next year.