2011, a new milestone for Governator ? Arnold Schwarzenegger has just finished his term as Governor of California, and should work again with James Cameron … BusinessMontres reports that he might also become an administrator of Audemars Piguet with whom he has a long-established friendship! 2011 marks a new step in the historic partnership between […] 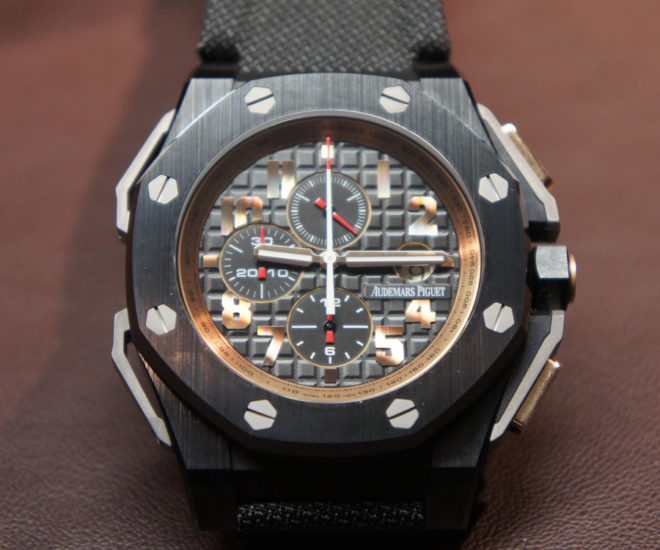 2011, a new milestone for Governator ? Arnold Schwarzenegger has just finished his term as Governor of California, and should work again with James Cameron …

BusinessMontres reports that he might also become an administrator of Audemars Piguet with whom he has a long-established friendship!

Inspired by the Man’s onscreen roles as well as his human values, this piece is a perfect blend of strength and control and will be the first Audemars Piguet watch to feature an all-ceramic 48-millimeter case middle and bezel ! The combination of materials, the exceptional level of finishing and the sheer sophistication of its design makes this watch a showcase of an impressive range of technical know-how.

In this case, a diamond grinding-wheel removes tiny layers of material from the ceramics in order to achieve the same level of detail as on steel.

Thus the ceramic case appears to glow in a variety of light conditions and gives off a shimmering high-tech glow.

The contrast between black and anthracite is further enhanced by the use of beadblasted titanium, chosen for the screws that punctuate the octagonal bezel, the pushpiece-guards, the two applied inserts on the left side of the case, accentuating its sporting appearance. To add the perfect finishing touch to the range of materials, the applied numerals, as well as the hour-markers are crafted in pink gold.

The gold of the pushpieces is adorned with a non-slip gridwork motif echoing the geometrical “Tapisserie” pattern that is a signature feature of Royal Oak Offshore dials. The mechanical movement inside features an equally exceptional level of expertise, and the hand-assembled, finely decorated self-winding movement is equipped with an ultra-efficient chronograph mechanism that measures short times where speed and power are of the essence.

Anticipated to be the last watch in the series created by Schwarzenegger and Audemars Piguet, this be issued in a 1,500-piece limited edition, each engraved on the back with the inscription Royal Oak Offshore Arnold Schwarzenegger The Legacy.