Loosen those purse strings if you want to get your hands on the century’s largest rough diamond. 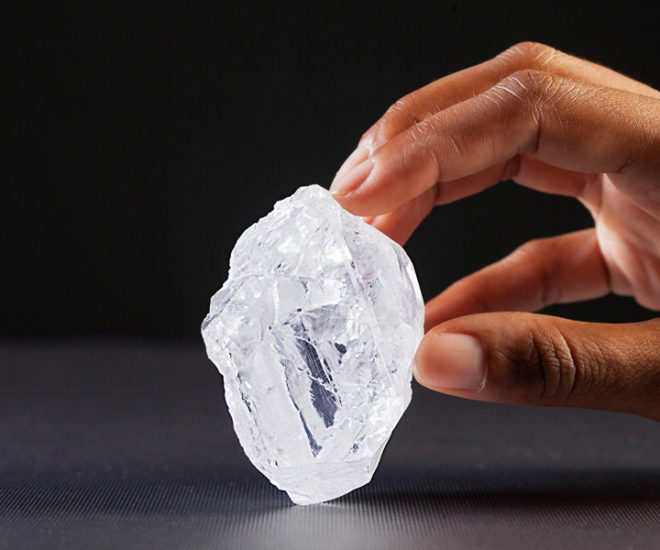 If you have more $70 million in spare change just lying around and don’t know what to do with it, then maybe you should head down to Sotheby’s London on June 29 and convert it into something easier to handle. The auction house will be hosting a stand-alone auction for the largest rough diamond in existence on that day. How big is it? Just look at the picture above for some context!

The find is one of high significance as this is the largest gem-quality rough diamond to have been discovered in more than 100 years. At 1,109-carats, the gem comes from the Karowe mine in Botswana and has been named Lesedi la Rona or “Our Light “in the Tswana language. Boasting exceptional quality and transparency, the diamond is thought to be somewhere around 2.5 to 3 million years old. Experts at the Gemological Institute of America have found that the color and transparency of the gem ensures there is no nitrogen or boron present in the gem. Only 2% of all gemstone-quality diamonds fall into this highly prized category.

“The Lesedi la Rona is simply outstanding and its discovery is the find of a lifetime” said David Bennett, Worldwide Chairman of Sotheby’s Jewelry Division. “It is a huge honor for Sotheby’s to have been entrusted with its sale. Every aspect of this auction is unprecedented. Not only is the rough superlative in size and quality, but no rough even remotely of this scale has ever been offered before at public auction” he added.

It remains to be seen if the gem will be able to yield the largest-top-quality diamond but the likelihood of it resulting in in a “D” color polished diamond is high. The only other rough gem diamond to beat the Lesedi la Rona is none other than the Cullinan Diamond from South Africa that weighed 3,106.75-carats. Mined in 1905, the diamond produced nine diamonds that now sit in the Crown Jewels of the United Kingdom. The most significant of the nine diamonds, is none other than the Cullinan I or Great Star of Africa at 530.20-carats, that is still the largest top-quality polished diamond known to man.

Who knows, maybe the Queen would like to add to her collection of gems, much like her grandfather King Edward.