The show brought a mix of styles together with aplomb, drawing on casual, sportswear and military influences. 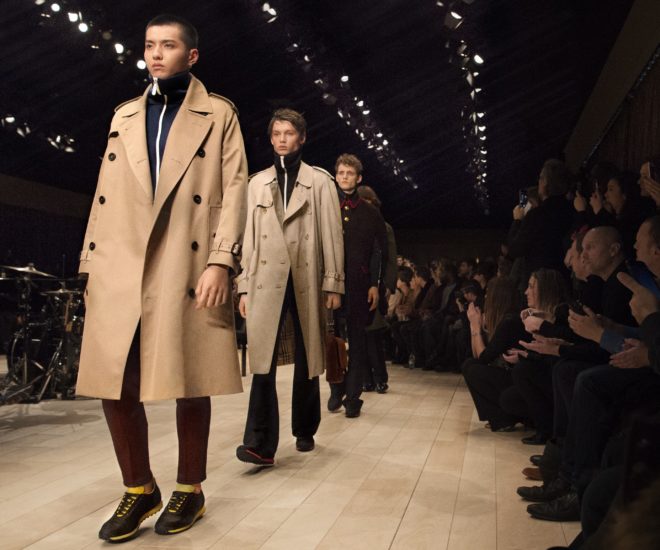 The London Collections menswear showcase was disrupted by the passing of David Bowie last week, followed shortly after by Alan Rickman’s death. Nevertheless, the fashion beat marches on and digital powerhouse Burberry, as previously reported, even found a way to include a moving impromptu tribute to Bowie in the autumn/winter 2016 show itself. The show brought a mix of styles together with aplomb, drawing on casual, sportswear and military influences. This is actually the first look the world gets at how Burberry will merge its Brit, London and Prorsum lines, which explains the mixing of styles in practical terms.

Even with the discomfiting pairing of tailored jackets with track pants, some things stay the same. Military detail has been seen everywhere at this year’s London autumn/winter menswear shows and this trend is a fixture at Burberry. This time jackets and coats led the way with metal military buttons and double-breasted cuts (as seen above). Dark colors reigned supreme, with navy blue, burgundy and dark green shades setting the tone. Fur is back and is already dividing critics… The parade of different looks made for an entertaining runway show, despite the funereal tone We end the story on a high note. This bomber jacket has been receiving rave reviews everywhere