Phase one of Hong Kong’s new Lantau Yacht Club Marina, the former Discovery Bay Marina Club, is expected to open in the second half of 2020.

The first phase of the refurbishment works for the Lantau Yacht Club Marina is scheduled to open in the second half of 2020, according to Hong Kong Resort Company Limited, developer of the marina and the Discovery Bay residential community in the east of Lantau Island. Phase one of the works covers the marina office and about half of the marina area. 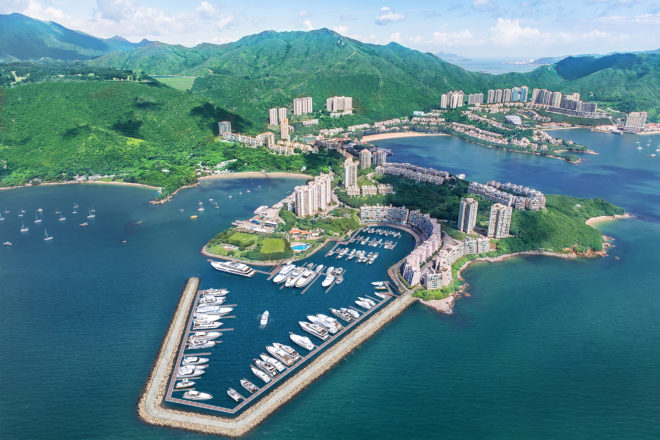 Formerly Discovery Bay Marina Club, the Lantau Yacht Club Marina aims to cater to the local marine leisure community as well as local and regional superyachts. Upon completion, it will provide about 150 berths and be the first marina in Hong Kong able to cater to megayachts up to about 100m.

Marina Projects UK, one of the world’s leading marina consultants, is an advisor on the overall design planning and technical provisions for the project, which HKRI says is being “built according to the highest international standard in terms of structural safety and building services provisions”.

Yacht Style magazine reported in Issue 51 (Jan-Feb 2020) that the first phase of the marina was expected to open in July 2020, having begun a major renovation in early 2019 when still known as Discovery Bay Marina Club, which began operations in 1989.

Victor Cha, Deputy Chairman and Managing Director of HKR International Limited (HKRI), a shareholder of the developer and operator, had earlier said: “Hong Kong is one of the biggest boating centres in Asia and a perfect destination for cruising, with its beautiful coastline and cruising areas in the outlying islands.

“We believe in the vast development potential of Hong Kong’s maritime economy, which contributes to tourism and the local economy. Our world-class marina aims to offer berthing space for local yacht owners and attract luxury yachts and superyachts from around the world to visit Hong Kong, making our city a preferred yachting destination in the region.”

Rudy Puystjens is overseeing the overall renovation scheme and day-to-day operations, having been appointed as Marina Director last year, when the facility’s new name was also confirmed.

The former Marina Manager of ONE°15 Marina Sentosa Cove in Singapore, Puystjens has over three decades of experience in yachting and hospitality, working in five-star properties around the world including yacht clubs in Qatar, UAE and Belgium. The Belgian is one of the few certified marina managers in Asia and a lecturer for the Marina Industries Association.