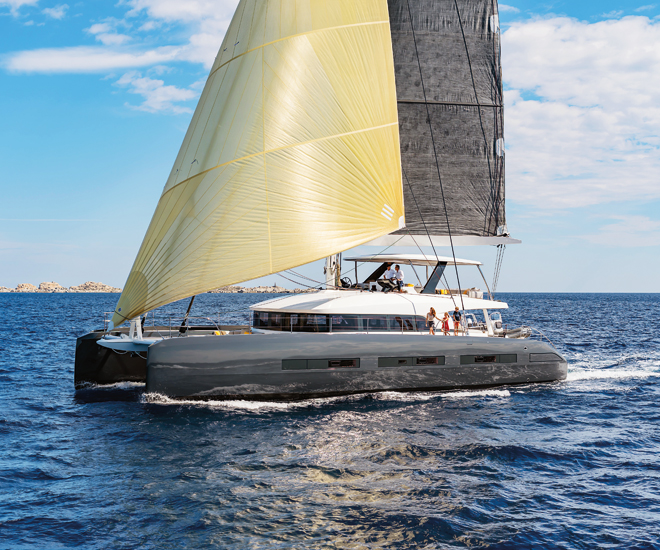 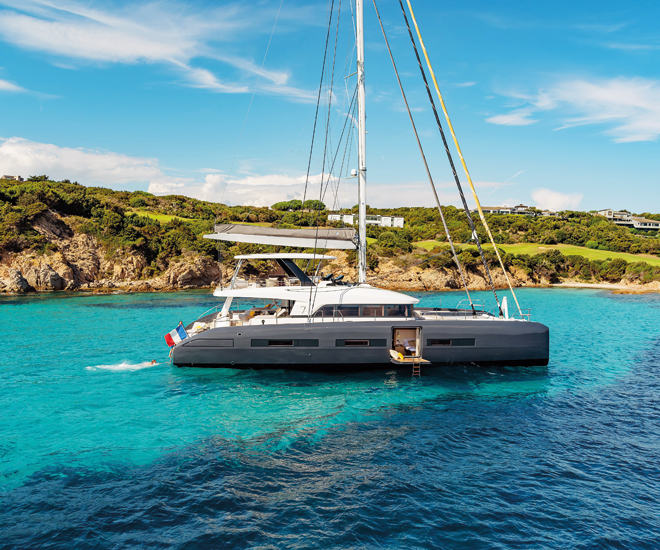 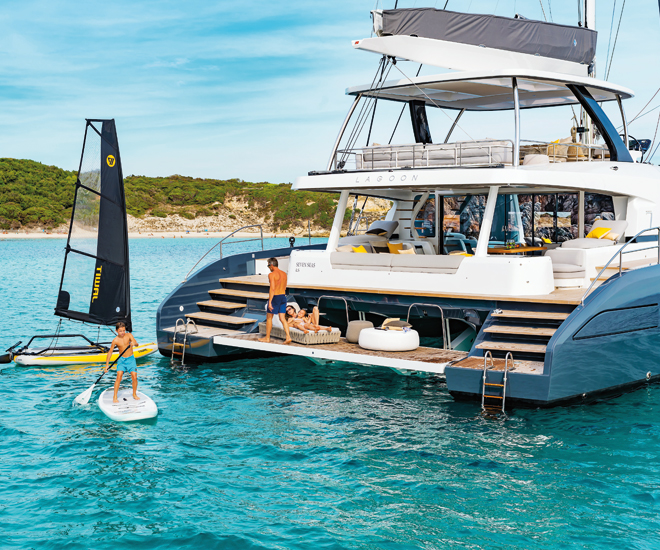 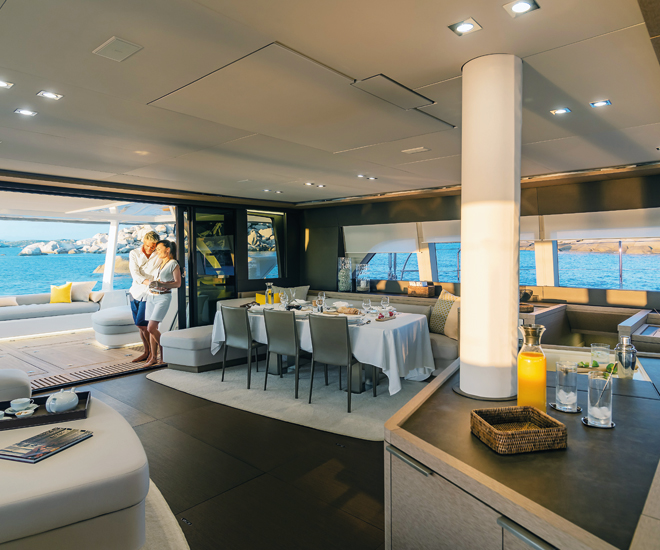 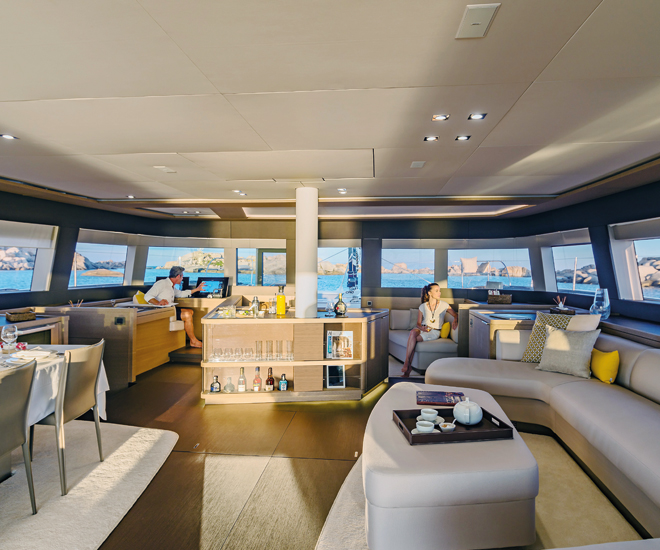 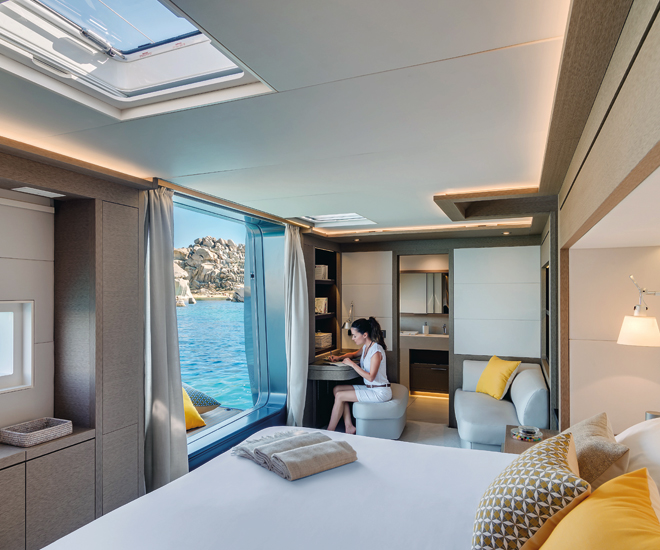 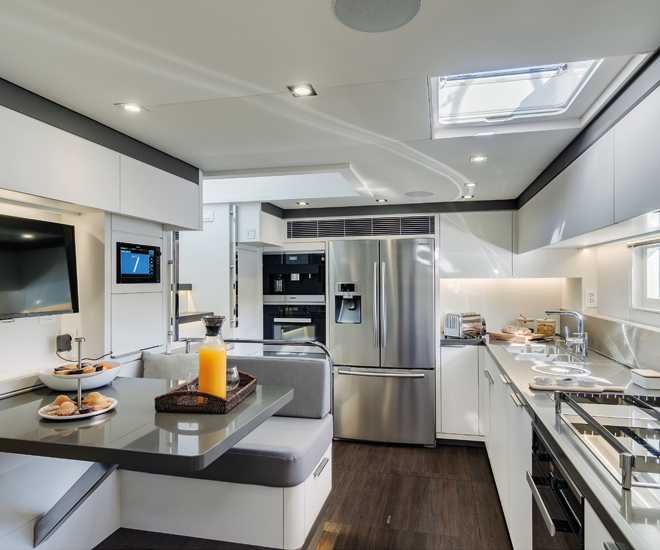 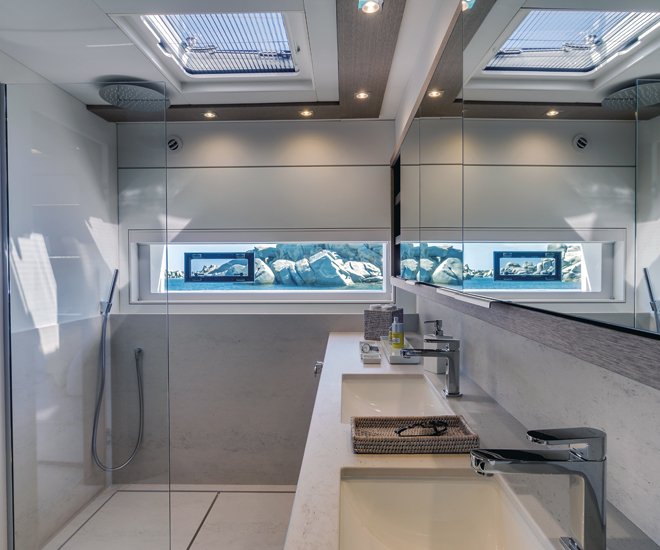 We reported in Yacht Style issue 36 that one of the first Lagoon Seventy 7s has been sold to a yachtsman in the Philippines, and there is apparently much interest in other parts of Asia. This vessel will be officially premiered in Hong Kong in May, and will then continue across the South China Sea.

Check out the yard’s online video of the vessel. “Have you ever wished you could visit every nook and cranny of the Seventy 7”, they ask. “Board the new Lagoon flagship without leaving your screen, thanks to our Seventy 7 360 degree tour. From her owner’s suite overhanging water thanks to her private beach to her elegant and comfortable salon with a panoramic view of the sea, this yacht is a legend in the making. Twenty-three metres of reinvented refinement, elegance and prestige”.

For yachtsmen still trapped in the ancient era of monohull sailing, they have this to say: “Many of our customers have switched from a monohull boat, whereas the opposite is rarely the case.

“It’s true, once a cruise yacht lover has sampled the incomparable comfort, space, ergonomics, safety and simplicity — of living and manoeuvring, for example — afforded aboard a catamaran, there are not many who would go back to sailing a monohull, nor to the amount of heeling when sailing close-hauled.

“So, the catamaran certainly has quite a few qualities in its favour, and we think the owners themselves are the best people to talk about this since, with each new voyage, they are the ones that experience the difference”.

For boating buffs, before continuing our own pictorial tour of the Seventy 7, we should note for the record that Lagoon was founded in 1984 as a subsidiary of Jeanneau Technologies Avancées (JTA), Jeanneau’s “racing department”. JTA gained a reputation for producing single and multihulled offshore racing boats (Pierre 1er, the Fleury Michon series, etc.) that won an unequalled string of victories. Lagoon has also been involved in more unusual projects such as building trimarans for the film Waterworld.

Lagoon is now part of CNB, a division of the Beneteau Group, the world leader in pleasure sailing craft construction. CNB offers a full and well-structured range of cruising catamarans designed by naval architects Marc Van Peteghem and Vincent Lauriot Prévost (VPLP) who have notched up an incomparable record of victories in multihull events. One of their most recent designs was the famous trimaran Oracle, winner of the 2010 America’s Cup.

A first generation series of catamarans was built between 1987 and 1996, the Lagoon 55, 47, 57 and 67 models, and these were intended for offshore cruising under private ownership. The Lagoon 37 and 42 models were designed for chartering. The key strengths of the Lagoon brand are its guiding principles: good design, high-quality construction and better-than-average performance.

Then in 1996, we saw the arrival of a new generation of Lagoon boats that quickly made their mark thanks to space-efficient layouts, greater comfort and attention to customer feedback.

Since 2003, Lagoon has been the world leader in the construction of cruising catamarans. They have a full and innovative range of boats and the support of a comprehensive distribution network. Indeed, Lagoon has more than 80 distributors throughout the world who are passionate catamaran specialists.

After 2010, when VPLP’s Oracle won the America’s Cup, Nauta Design (another great name in naval architecture) has been working with Lagoon to design the interiors of new models. In 2013, the new Lagoon 39 and 52 signalled a major change in the architecture of cruising catamaran: their rigs with the mast moved amidships, stemming directly from VPLP naval architects’ expertise in respect of large racing multihulls, brought about a substantial and beneficial change in relation to the conventional parameters of a cruising catamaran. By 2014, Lagoon’s return to motor yacht construction attracted a great deal of attention, with the arrival of the superb 630 MY and the 40 MY.

Then in 2016, the shipyard launched the 42, which was a great success with customers by virtue of the combination of performance and comfort provided by this 42-footer. The same year, Lagoon launched its new range: Seventy. This new high-end range sees the birth of the sailing catamaran, the Seventy 7 and its motor version, the Seventy 8.

Lagoons are built at two sites in France, and being part of CNB, a division of Beneteau Group, the company has access to industrial capacity, R&D facilities, commercial outreaches, human resources and a reliable financial structure.

The infusion moulding technique enables the yard not only to optimise the proportion of resin in the fibreglass, comparable to the pre-impregnated technique but also to improve the bonding properties of the composite.

The isolation of each balsa square by mechanical ties between the inner and outer skins improves the quality and reliability of the structure and saves weight too. The systematic use of a very high-quality anti-osmotic resin ensures durability for all Lagoon catamarans, say the makers.

Buoyancy is a guarantee of safety. All Lagoon catamarans comply with CE standards governing the unsinkability of multihull vessels. The fore and aft compartments of each hull are separated from the boat’s living accommodation by watertight bulkheads. The density of materials used, and the absence of ballast increase buoyancy. Even after a collision, a Lagoon will still be able to sail.

The furniture and interior fittings are designed by engineers working in the Lagoon design office. Advanced CAD software enables skilled craftsmen to assess new design features in real time. Thus each item of equipment and each piece of furniture is easily installed because the constraints relating to the boat’s complex architecture were resolved in the design stage. In the interests of sustainable development, all partitions and furniture panels on Lagoon catamarans are made using Alpi reconstituted wood.

Dubbed the “Gentle Giant” by multihull enthusiasts who virtually blockaded the boat in Cannes, one of the first reviewers to be granted a test sail was Philippe Echelle of the leading magazine Multihulls World. His lengthy and very detailed report released in February says in part: “Our boat was the three-cabin owner’s version, with three separate heads. Its size allows it to have a real flybridge, without impinging too much on the actual lines. The flybridge houses two big helm stations, with all the necessary instruments, and great positioning of the engine controls and bow thruster. The panoramic view from the deck and mast is excellent.

“Tastefully fitted furniture here gave an almost nomadic atmosphere, with comfortable light upholstery which was perfect to use. A meal for 10 people could easily be fitted on the deck salon, with an additional table serving for drinks or for children to sit at. “A guest suite to starboard is accessed via a private stairway at the entrance to the salon. Thick carpet, attractive bathroom, small corner desk, and natural and indirect electric lighting which creates a luxurious, but not flashy, atmosphere.

“The port forward cabin offers exactly the same, except that the bed is oriented athwartships. A large pivoting door in the topsides opens up to become a balcony, fenced by guard wires on carbon stanchions, creating an amazing relaxation area. This original idea really breaks away from the norm”.

Naval Architect Marc Van Peteghem comments: “The design of the Seventy 7 had to set the boat clearly in the yacht category, by being fully part of the Lagoon family, centred around living on board, while maintaining performances which allow 220 mile days.

“It was important to maintain the Lagoon values – family, enjoyable, welcoming. But above all, not to be ostentatious. The first comments we got from owners visiting the boat at Cannes indicated that together we – the yard, Nauta and ourselves – had succeeded in creating this balance. If I had to choose two words to describe the Lagoon Seventy 7, they would be gentle giant”. The phrase was coined, and it has stuck.

Exterior design was by Patrick Le Quément, and interior styling by Nauta. The vessel carries a 193 sqm mainsail, 130 sqm furling genoa and 81 sqm furling staysail, plus a 500 sqm asymmetric spinnaker.

Two 180 or 230 HP motors with shaft driven props are the options. The price of the model tested by Philippe, with literally all options such as air-con, two generators, two watermakers, dinghy, media centre, Brookes nav-pack, 4G wifi internet connectivity, reversing cameras, DFI sails, spinnaker and so on was €4,340,147 excluding tax.

This story was first published in Yacht Style 37.