The sun was upon us again at this year’s Cannes Yachting Festival, the largest in-water show in Europe. The French city welcomed more than 51,000 festival-bound visitors over the six days. This included 530 exhibitors, and 630 boats, which filled the Vieux Port and Port Pierre Canto. With an impressive 191 new models on display, […] 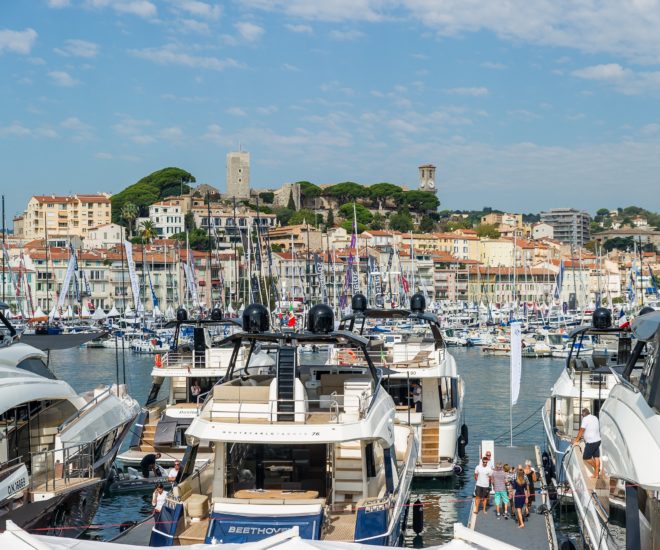 The sun was upon us again at this year’s Cannes Yachting Festival, the largest in-water show in Europe. The French city welcomed more than 51,000 festival-bound visitors over the six days. This included 530 exhibitors, and 630 boats, which filled the Vieux Port and Port Pierre Canto.

With an impressive 191 new models on display, all the big names in the world of yachting were there. The Italian Ferretti Group launched a number of new models; the Ferretti Yachts 450 and 850, the Pershing 5X, Rivamare and 76’ Bahama, Custom Line Navetta 37 and the Itama 62. For Arcadia Yachts, their 85S and 100 made their world debuts, while the Sherpa made its in-water debut. All three yachts feature a semi-displacement fiberglass hull, an NPL type selected for optimum efficiency and performance. Benetti also had the official premiere of their Mediterraneo 116, a massive superyacht featuring an 80sqm sun deck, and a cruising range of up to 3,000nm. Beneteau showed off its new Sense 57 and Oceanis Yacht 62, while Azimut displayed 17 models representing its entire range. The Numarine78HT Evolution had its world debut, while the Turkish shipyard’s sporty 60Fly made its European debut at the event. Sirena Marine unveiled its Azuree 41’ and Euphoria 68’, along with the other big news that they are returning to powerboating with a new line.

The American shipyard Sea Ray was also prominent, and debuted its L590 to the European market.

The British shipyard Princess Yachts was represented with a showcase of 10 yachts. Its Princess 30M and 75MY made their Cannes debuts, and were joined by the 35M, and making her first world appearance, the 49, a craft designed to be a breeze to manoeuver with her advanced twin Volvo IPS-550 pod drive system.

World Yachts Trophies were given out for boats and individuals. Some of the notable ones included Sanlorenzo, who won Best Interior of the Year for its SL78 in the 24 to 38m range, and its Chairman-CEO Massimo Perotti, who was named Personality of the Year. Prestige Yachts’ designer Vittorio Garroni was awarded Designer of the Year, while the Sunreef Supreme 68 took home an award for its layout in the category of yachts ranging between 15 and 24m in length.

The Concours d’Elegance 2016 Competition was held alongside the show’s luxurious festivities. Exclusively open to owners, collectors, and exhibitors of boats measuring 12m or less, the boats of course, had to have an elegant design and contain a maximum crew of 4 people, including at least one woman. Judges evaluated each boat based on the following factors: the quality of restoration, the history and rarity of the model, as well as the style and grace of the crew among other influences. For boats manufactured before 1980, Lady Bambi won first place. A stunning Riva Bertram built in 1974 also became the Jury’s favourite boat. In the manufactured after 1980 category, Violetta 2004 won the gold. Finally, to top things off, the Feminine elegance first place prize went to the Intrepid 327 Cuddy, built in 2015.

The event’s official sponsor, Porsche, also had a number of new models on display, from the latest 911 to the 718 Boxster. With a prominent position next to the sea, the German cars certainly