France’s Jeanneau has raised the bar with its new Sun Odyssey 410, a smartly designed, long-legged cruising yacht that swallows the miles. By Kevin Green.

Jeanneau’s Sun Odyssey range is characterised by highly functional sailing yachts and recently there have been some major successes for the eighth generation of this range, with the best-selling 349 a firm favourite of mine because of its easily manageable sail plan and slippery hull. The new 410 builds on these characteristics while looking that little bit sharper, I concluded, when I saw the new Jeanneau at the Cannes Yachting Festival last September and then returned to France this year to sea trial a model that was crowned Best Sailing Yacht in Asia at this year’s Christofle Yacht Style Awards in Phuket.

Long-time designer Marc Lombard has hardened the hull lines, given it a reverse bow and twin rudders protruding at an angle to control the ample volume. Another sensible design feature for a cruising yacht is an L-shaped keel that won’t easily snag fishing nets while it also puts enough ballast deep down to allow the yacht to carry the sail plan in stronger winds.

For aspiring club racers, there’s also a performance rig, as Jeanneau aims to maximise the appeal of this model. With several different accommodation layouts, it’s a yacht to suit many tastes and budgets.

Making up the bulk of Jeanneau’s 16-model sailing range up to 64ft, the Sun Odyssey range comprises 10 models from the 319 to the 519 including the new-generation 440, 490 and most recently the 410, which I took to sea off Cannes on a sparkling Mediterranean day.

The once-familiar tear-drop saloon profile is now less pronounced on the 410 as the designers seek a more integrated-deck style silhouette while allowing for plenty of headroom below because of the towering topsides. The Sun Odyssey 410 offers clean lines and a smooth ride, and like the 440, offers step-free side decks for ease of movement around the boat

On the topsides, the most striking feature as I step aboard is the side decks that flow down into the aft part of the cockpit, enabling easy access and allowing water to run off the transom. This is a big feature taken from its pioneering elder sister, the 440. This design also allows a high coaming around the cockpit to ward off spray, as you don’t need to step over it. Instead, you simply walk down into the transom area.

The cockpit also benefits from the wide beam to house a twin-leafed teak table and deep side benches with integrated Raymarine instruments and, most sensibly, the engine gauge at knee height on the starboard side of the table.

The twin binnacles are integrated into the coaming which makes for a seamless, sturdy design that also creates ample walking space through the cockpit for access to the sea via the electric swim platform. Cleverly, the coaming curves round at the end of the bench to also give back support.

Moving to the foredeck is aided by the integrated fibreglass toerails and anchoring is done via a rather smallish Quick vertical windlass that runs the rode through the bowsprit, a neat arrangement complemented by a deep locker to minimise chain snags. Other good features are oversized deck cleats, including midship ones.

Sail handling has taken a fairly traditional approach, with saloon-top halyards running into jammers and twin Harken winches for hoists, while the steerer has a single primary winch on each side for the furling genoa, which also controls the German mainsheet and other lines, in conjunction with triple jammers. 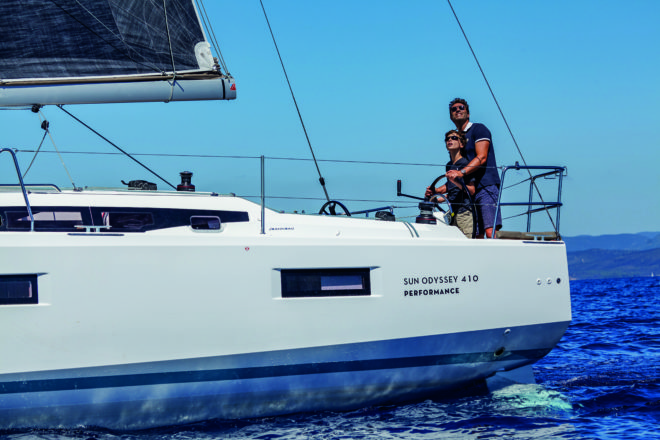 The mainsheet is located on the saloon top and runs via a Dyneema bridle line, which reduces weight and costs. This set-up hints at the yacht’s racing intentions while also freeing the middle of the cockpit for relaxation.

Elsewhere on deck, flush hatches and shrouds set clear of the side decks create lots of usable space, a major intention as Jeanneau woo a variety of potential owners, including former motorboat owners who want some freedom from the gas station while retaining living space.

A key to this approach is user friendliness and automation of the sailing rig, so options such as mainsail in-mast furling, self-tacking jibs and electric winches are all part of the Sun Odyssey options list.

Stepping down into the light-filled saloon is easy via the gently angled companionway. Not to my liking, however, are the saloon-style doors on the main hatch, with more seaworthy washboards or integrated sliding ones my preference. The interior is filled with natural light from a combination of portlights, saloon windows and skylights, some of which also enhance the ventilation. Jeanneau has created a saloon with an unusual central galley, but that still retains a small couch alongside it and a navigation station aft, while the dining table is to starboard

Traditionalists may baulk at having the galley dominating the central part of the saloon, but the navigator will be happier with the navigation station near the companionway, allowing close proximity to the cockpit crew.

Interestingly, despite the central galley, a second small settee is alongside it, opposite the main lounge area to starboard. Here, there’s an adjustable table that becomes a day (or night) bed, so good flexibility again.

The layout is very much a seagoing arrangement, rather than the acres of open plan preferred by some other brands more suited to life in port. Another example of this is the bench that extends midships from the galley to support the cook and create ample storage space.

Cooking is done via a twin-burner gimballed gas stove and an optional microwave, which requires the optional 7.5kVA generator located in the transom locker. For the perishables, the 190-litre chest fridge with front access is ideal.

Good features include fiddles on the Corian worktops, double deep sinks and rounded ends on the Alpi teak furnishing to avoid bruising. Bluewater sailors may choose the washing machine (230V) option plus the extra 75-litre fridge and freezer options.

The bathroom is opposite the navigation station on all four layout options, with a second bathroom forward to create an en-suite for the owner. A manual head is fitted (with electric option) and the separate shower cubicle is spacious enough for a large adult, despite including the sink unit, while the moulded base is easily cleaned and there’s the essential ventilation hatch as well.

Engine access is gained by lifting the companionway steps on their gas struts, revealing all the main service points on the 40hp three-cylinder Yanmar (oilways, filters, impeller and fan belt) plus there’s side access from the stern cabins.

The yacht comes with either two or three cabins. The accommodation layout should have wide appeal, especially to cruising couples who could use one of the aft cabins as a storage/work area while having a guest cabin alongside it. 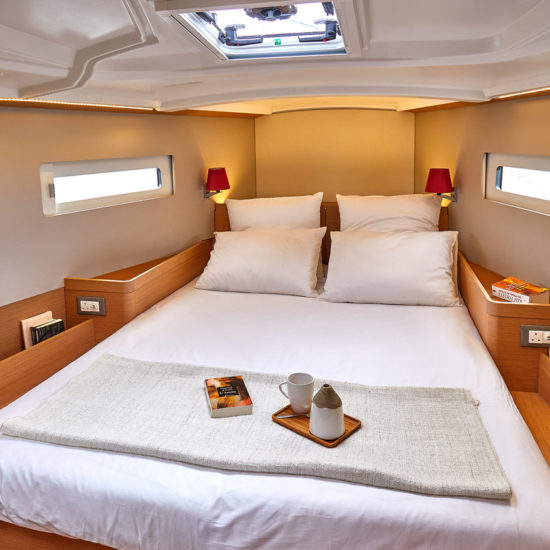 In all the layouts, the owner always has a 2m by 1.5m queen-sized bed in the bow with memory foam mattress, which can even be offset to increase floor space, while headroom is 1.87m. There’s storage in side lockers and under the bed, but the latter will be compromised if the optional drop-down thruster is fitted – a wise option on a yacht this size.

The aft cabins are conventionally laid out, so impinged from above by the cockpit sole. However, they benefit from large windows facing aft and have a deep well at their entry, giving 1.88m of headroom before you crawl into the fairly wide double beds. The batteries and electric controls are in the portside cabin.

Tall storage lockers here are welcome and if you choose the ‘workshop’ option for the port cabin, there’s plenty of space for all cruising accoutrements and a small workbench.

Enjoying occasional regattas is very much in the remit of the modern production cruising yacht, with manufacturing processes continually improving the power-to-weight ratio of vessels. Having said that, the Sun Odyssey 410 is traditionally built in hand-laid monolithic GRP, which is a simple and easily repaired structure, with the addition of an inner grid to give support and rigidity. 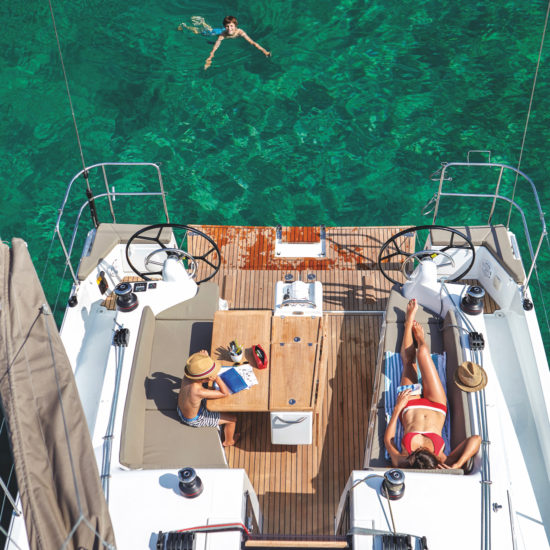 Insulation requirements mean that the deck is balsa laminated, which also helps sound proofing and optimises the weight for an overall displacement of 7,900kg, good for a 42ft cruising yacht.

Hull shape includes that distinctive cut-back forefoot on the bow to reduce the wetted surface, and the rounded aft sections finish in a hard chine to give directional stability when heeled.

The yacht can be set up for racing with Jeanneau’s option list, the main items being a taller Z Spars deck-stepped mast with large fully battened mainsail and 115 per cent genoa. Then there’s the standard bowsprit which creates good separation to fly a Code 0 spinnaker, controlled by two extra winches in the cockpit.

The final and essential item is the Flex-o-Fold three-bladed folding propeller. Performance with these options, according to the Polar Chart, gives seven knots boat speed at a 45-degree wind angle with the breeze at 14 knots – ideal for both the race track and swallowing those long cruising mileages, which this model is ideally set up for.

Spring time on the Mediterranean is my favourite season because a strong breeze or even a harsh Mistral howling down from the nearby Alps is common, and so it was for my sail on hull number seven. 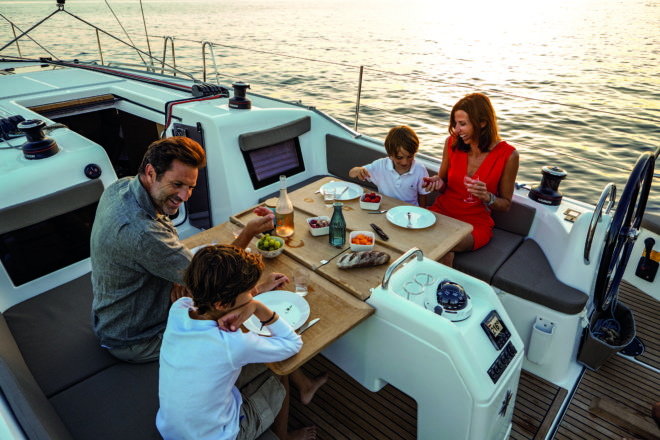 After motoring out from the busy port, requiring diligence and heavy use of the bow thruster as we left the dock, we hoisted the mainsail in the growing breeze that initially showed 16 knots on the B&G wind instruments. As I turned us into the wind, a crewmate operated the electric controls for the Harken winch to guide the sail clear of the lazyjacks.

With this done I turned the yacht off the wind to help the genoa unwind itself before it was sheeted in as I crouched at the helm, a slightly uncomfortable position because of the twin backstay, but snug behind the large sprayhood that’s an essential option over the semi-flush decks.

However, my feeling of discomfort was replaced by glee as the yacht heeled to 30 degrees before accelerating strongly into the wind and waves, showing a speed of eight knots in the 16-knot breeze with the bows pointing 45 degrees.

Tacking proved fairly easy, with one crewmate winding-on after I eased the sheets on the weather side, and the yacht drove round hard on its twin rudders, as I made my way unobstructed between the twin helms. The breezy day meant no chance to hoist a Code 0 out on the integrated bowsprit, but this would be an advisable option for warm-water sailing to avoid the drone of the diesel engine. 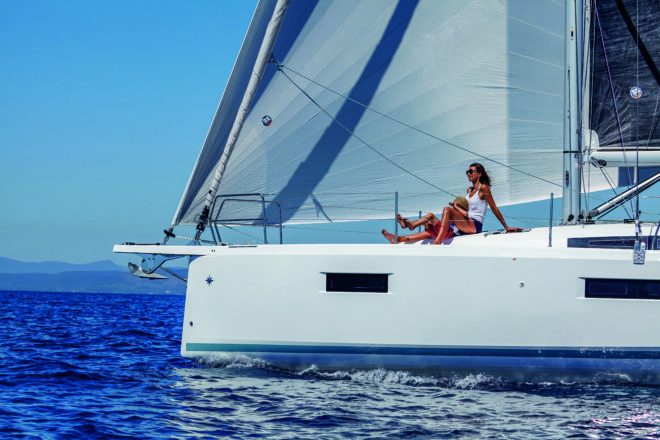 More was to come as the wind gusted up to 20 knots, which would be the time most similar yachts would reef, but due to the twin rudders and hard chine hull, the yacht weathered the stiff breeze and tracked straight, reaching a tad under 10 knots – impressive.

Off the wind, double digits were seen on the plotter, but its placement required the steerer to poke fingers dangerously through the wheel spokes. On the plus side, the helm felt beautifully balanced and foot chocks were ideally placed as the Jeanneau Sun Odyssey 410 heeled hard over with our bows aimed for Saint Tropez.