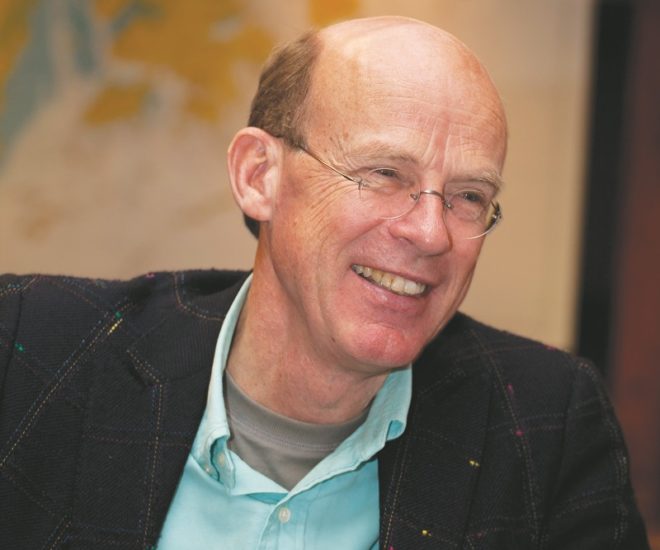 “Of all the elements that go into a proper yacht, the one that should never be compromised is beauty.” (Arthur Beiser, ‘The Proper Yacht’). André Hoek has read the book and taken it to heart.

When I win the Mark Six, the first person I’m going to call is not my broker. It’ll probably be André Hoek – surely the most prolific ‘modern classic’ yacht designer in the world. Hoek has perfected the happy art of combining the exquisite lines and styling of a classic yacht with a modern and efficient underwater hull shape produced with the assistance of a lot of very clever computer-driven analysis. The results are nothing short of magnificent: this smiling Dutchman couldn’t draw a bad line if he tried.

Hoek started with traditional boats, the Dutch skutsjes, lemsteraaken, hoogarsen and schokkers, ‘optimizing’ them for racing purposes. Originally trading and fishing boats, these commercial sailing vessels fell out of use some time after the Second World War, instead becoming popular as family cruising boats. As we all know, scratch a cruiser and you’ll find a racer underneath, and very soon the cruisers were racing each other, and before long someone wanted to work out how to make what they considered to be a very pretty boat – and they are certainly unusual – go just that little bit faster. The Dutch leeboard boats were capacious coastal cargo-carriers, and built to go fast – because speed is good for trade, especially when you are rushing the fish catch to market. They were broad-beamed and shallow-draughted, deriving their stability from their shape rather than from a keel. André Hoek’s family owned and raced one of them. “In the 1970s there was comparatively primitive mathematical modelling available to us. We had a very simple Velocity Prediction Programme (VPP), and computers that had less numerical power than today’s average calculator. Gaff rigs, surface-piercing leeboards and complex hull shapes proved hard to describe in numbers, but we had a good deal of success – we moved the mast aft to give a bigger fore triangle, we increased the height of the rig, and sometimes we even added ballast. We knew the calculations were working when the optimized boats went faster and started winning on the water.” And from there it was only a hop, skip, and a set-square to designing ‘new traditional’ boats that went faster still.

Hoek graduated in Naval Architecture in 1980, but the European yacht design world just wasn’t hiring, so Hoek started work with C&C Yachts in Canada, and then spent time with ITC, a company specialising in heavy-lift transportation, before embarking on an MBA.

“But I knew that I really wanted to be designing boats, and I understood that designing boats and running a business designing boats are two entirely different things. And I knew that I needed to learn about sales and marketing.” Most of all, Hoek was to find out later, having an MBA gave him the vocabulary and understanding to communicate effectively with the people that became his clients – high-powered businessmen and captains of industry. “People discovered that I was no longer ‘fully employed’ and started offering me commissions.” Hoek Design was founded in 1986, and soon there were an additional four designers in the office. In 1987 the design office launched its first retro-classic ocean going design, Joss, built in cooperation with an owner who had previously owned a traditional Dutch lemsteraak and now wanted a medium displacement yacht that could comfortably sail offshore. Joss became a standard bearer for the Hoek Design approach of combining a classic look above water with modern technology below: very modern indeed, with a steel hull, winged keel, spade rudder and powerful sloop rig. Joss was an immediate sensation, and a huge success.

In 1994 the late Michael Peacock, former captain of the British Admiral’s Cup team, asked Hoek to build the boat that was launched as Truly Classic (later Zephyr, now named Savy). The boat started a volume of business that Hoek had never expected: a whole series of designs were created that combined the elegance of the 1930s with modern underwater hull configurations, and built in ‘semi-series’, meaning that clients could base a new yacht on an existing proven hull design where the majority of the design decisions had already been made, and then customise the interior and deck layouts, the draft, and the sailplan. ‘Truly Classic’ became a brand name in its own right, with designs created for a whole range of yachts – 56’, 65’, 75’, 90’ and 102’. To date more than 30 Truly Classics have been built, and their reputation for looks, performance and quality established Hoek Design’s reputation forever.

There are now more than 200 Hoek-designed boats afloat, ranging from 33’ up to 180’, with the latest launching, Wisp, a delight to the eye at 157’ overall. The latest project on the drawing board is a substantial 262-footer. Did André Hoek ever imagine that he would be designing boats of this size? “I never imagined that we would design and launch more than 200 boats!” he says, rather disingenuously.

Hoek is quick to stress that the use of powerful modern computer design tools such as CFD (Computational Fluid Dynamics) does not imply that “we have all the answers and can pull a new boat out of a hat, so to speak. One of our most recent boats, Elfje, was the result of a five-month design process as we further refined the underwater lines and what we could then accommodate in the interior. There is always new technology to investigate – keels in particular. Elfje has a lifting keel, and we are currently working on a design with a canting keel, with the hull to be built all in carbon fibre.” Where big boats – superyachts – are concerned, many designers have succumbed to the temptation to add more and more decks to successively bigger boats. Hoek Designs have “always tried to keep the look. If you want a Bentley, why talk to Aston Martin?” If you don’t want a boat that looks like a ‘Hoek classic’ why come to Hoek Design?

Here’s another line from Arthur Beiser: “Yacht designers should be men of sensitivity and spirit – the former quality to assure that whatever they do will show grace and the latter to assure that they will not permit the crochets of owner or racing formula to distort their vision.” André Hoek smiles. “We have on occasions been pushed by clients into a corner that we didn’t like, and we have resisted.” So, plenty of spirit there.

In addition to the sensitivity and spirit of their designer, André Hoek’s boats also have the distinction of retaining their value in a rarified secondary market. “Some years ago we started a brokerage – for our own boats – at the request of our existing clientele. In some cases, they were selling for more than they originally cost. “The reason is simple,” says André. “Where ‘modern’ boats are concerned, next year will produce yet another new style or feature that looks good in order to generate demand – but a Hoek design will still be a beautiful boat in ten or twenty years time.” It’s part of the timelessness of a true classic, and our dictionary describes ‘classic’ as “of a simple, elegant, style, not greatly subject to changes in fashion.”