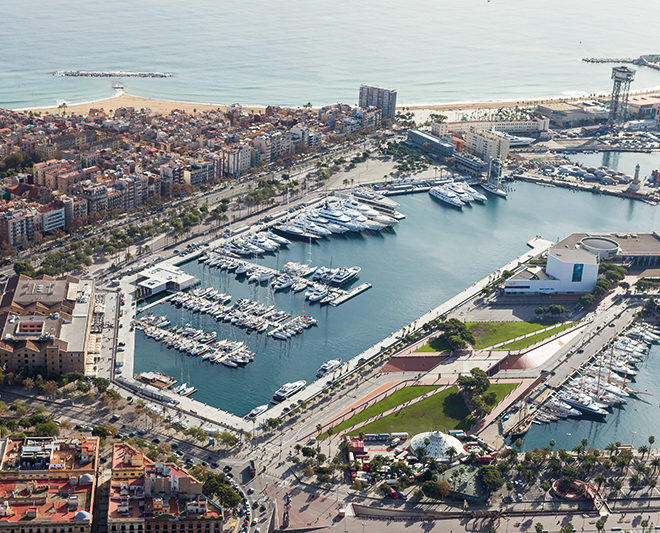 Boaters visiting the Mediterranean are drawn to its famous marinas. Some charter small sailboats or motor vessels. Others pay more than EUR 100,000 a week for a trial taste of luxury lifestyles afloat. Ultra-wealthy owners build superyachts in Europe, and often stay for a season before heading home to pristine Asia-Pacific waters.

The Côte d’Azur; from Saint-Tropez, to Cannes, Antibes, Nice and Monaco, is always a focus, as are Santa Margherita, Portofino and Italy’s Amalfi Coast. A sign near Olbia in Sardinia points to Porto Cervo and the Costa Smeralda. Palma in the Balaerics, Malta and Cyprus have their adherents. The Greek islands and Turkish Riviera can be a delight. But the latest “in” marinas are undoubtedly OneOcean Port Vell in Barcelona, and Porto Montenegro in the amazing Adriatic Sea. Located 470nm from the Med’s western entrance at Gibraltar, the vibrant Catalan capital of Barcelona on Spain’s Iberian Peninsula is fast becoming the first port-of-call for superyachts voyaging the trans-Atlantic from the Caribbean to spend an extended “summer” in Europe, which spans April to September.

Officially opened last year as OneOcean Port Vell, and taking a debut bow at Monaco Yacht Show, this former site for the Olympic Regatta in Barcelona 24 years ago has undergone a stunning EUR 80 million upgrade, and can now host 158 private yachts of more than 190m. Backers are OneOcean Ventures, a customized endeavor of the long-established and privately-held Salamanca Group based in London. Says a spokesman: “Drawing on 15 years experience supporting UHNWI investment, business and lifestyle activities, OneOcean Ventures was set up to establish new benchmarks for the superyacht industry; one that applies financial sector rigor, transparency and discretion.”

Possible synergies with passing superyacht owners are not hard to spot, and OneOcean Port Vell general manager Paul Cook told a conference in May that “with 20 yachts over 100m in build, ensuring secure space is available in a location that owners enjoy is driving demand for berth purchases.” Berths can indeed be bought at OneOcean Port Vell, and leased back to others if the owner’s vessels are elsewhere. The facility is also a last port-of-call for Caribbean-bound yachts in October and November. Or why not winter here? Cook recommends making it a year-around base.

The Mediterranean Yacht Brokers Association (MYBA) is equally ecstatic, and has decreed that OneOcean Port Vell will be the host venue for the next three annual MYBA Charter Shows, starting from April 24 to 27, 2017. This is a prime event, and Port Vell beat out rival pitches from Genoa and Nice. Barcelona’s urban population is 4.7 million, ranking it after Paris, Madrid and Milan among European Union cities, and it is the largest metropolis on the Mediterranean Sea. Says Wikipedia: “Barcelona is one of the world’s leading tourist, economic, trade fair and cultural centers, and its influence in commerce, education, entertainment, media, fashion, science and the arts all contribute to its status as a major global city.”

Somehow they missed soccer. Any aficionado knows the names of Lionel Messi, Luis Suárez, Neymar and Andrés Iniesta of the world-famous Barcelona Football Club. If Barça, as the team is nicknamed, is playing at their home Camp Nou HQ, hotel rates can double or treble. And what about architecture? Antoni Gaudí (1852-1926) was the city’s renowned art nouveau exponent. There are many examples of his off-beat works, from Casa Vicens, Parc Güell, Casa Milá and Casa Batlló to the incredible La Sagrada Familia, a church that began construction in 1882 and is expected to be finished circa 2025-2030. Frank Gehry and Norman Foster added touches too, including Camp Nou.

Las Ramblas is the central tourist thoroughfare, where liter-sized sangrias are served in huge glass bowls and a statue of Christopher Columbus points to the Americas. But the Old Town and Gothic Quarter are as interesting. Some of its quaint restaurants offer only Jamon Iberica, the region’s famed ham, in dozens of different dishes. Ordering a chef-created paella someplace else is de rigueur. Nearby for sunning and swimming is Barceloneta Beach, and all this is a 15-20 minute stroll from OneOcean Port Vell. Harbour Master and prior yacht captain Anders Pehrson presides over five quays in the complex. Berths include power, potable water, cable TV and fiber optic internet connections. Duty free fuel is available, plus provisioning, and this is one of only a few European marinas to hold a TPA permit, allowing non-European vessels to complete maintenance work in the marina tax free.

Spanish charter rules have been simplified, and OneOcean Ventures itself handles bespoke charter inquiries often relayed by their Yacht Client Advisory Team in Monaco. They are also “able to take on full responsibility for one transaction, or asset management throughout the lifespan of the yacht, and support technical, financial, administration and regulatory needs.” When Porto Montenegro exhibited at the 2014 Singapore Yacht Show and Hainan Rendezvous, a few eyebrows were raised. Leading European marinas don’t often have displays at such far-flung regional events, although Monaco Tourism is sometimes about. In this case Peter Munk, majority shareholder of Montport Capital which owned Porto Montenegro Marina and Resort, realized that Asia-Pacific people were increasingly visiting the Adriatic. He wanted to tap into a new client base.

In 2015, Porto Montenegro won the Superyacht Marina of the Year Award, which is open to all Gold Anchor accredited members of British-based The Yacht Harbour Association (TYHA). It is nominated again for the 2017 Awards, which will be announced at the London Boat Show in January.

However, it was in February this year that the most momentous developments began to take place. Porto Montenegro, which by then had 450 berths capable of taking vessels to 180m, announced it was making a 250m berth available for an anticipated new generation of giga yachts.

Industry pundits said that this instantly positioned it as a world leader, exceeding the largest superyacht berths even of OneOcean Port Vell in Barcelona (190m) and Grand Harbour Marina in Malta (135m). The present #1 private yacht is the Lürssen-built and Middle East-owned Azzam at 180m, but with concepts like the 220m Double Century being floated, Porto Montenegro will be ready for her.

For the record, OneOcean Port Vell’s facilities include a 440m fixed dock for superyachts, so they too can accommodate future giga yachts. Munk, a Canadian entrepreneur who founded Barrick Gold of Toronto, the world’s largest gold producer, was by early March extolling Porto Montenegro at Dubai Boat Show in Mina Seyahi, describing this event as “an unparalleled platform to showcase to the Middle East’s nautical investors and enthusiasts.”

He obviously piqued their interest. On May 7, a new media release from Sand People advised that “the Investment Corporation of Dubai, a principal arm of the Government, has agreed to purchase Porto Montenegro Marina and Resort from Montport Capital.”

Located in the Bay of Kotor, a World Heritage site on the Adriatic Sea, the landmark waterfront development offers a lifestyle community for boat owners, residents and tourists, set against the magnificent backdrop of the Montenegrin mountains. In only 10 years, Porto Montenegro has firmly established itself as a premier destination for yachtsmen and women. “The move is in alignment with ICD’s strategy to add high quality international assets in fast-growing markets to its substantial portfolio. The transaction marks ICD’s first investment in Montenegro and the yacht marina sector, both of which are expected to experience strong growth in coming years.”

ICD is currently developing the Royal Atlantis Resort and Residences facing Atlantis on The Palm Jumeirah in Dubai. Last year it acquired stakes in the W Hotel in Washington DC, the Mandarin Oriental in New York, and in One and Only in Cape Town. It also has significant equity in Sol Kerzner’s holding company which operates the One and Only, Atlantis and Mazagan brands.

Munk was philosophical about the deal, describing ICD as the ideal party to take the resort to the next level. In addition to 450 berths already built and occupied, approvals are in hand for another 400 berths, plus development land with a BUA of 280,000sqm. “It has the potential to double in size, and I am confident I am leaving Porto Montenegro in very safe hands,” he said.

Presently, the facility has sold out more than 200 luxury apartments, 55 retail outlets made up of restaurants, bars, cafes, shops and amenities, and a five star Regent Hotel with its own 80 luxury suites and apartments. Owners are said to get 85% revenue returns from the Regent’s rental program.

As for the marina: “Complemented by these spacious waterside residences, signature restaurants, lively bars and a wide range of sports, leisure and cultural activities, the marina is an ideal homeport solution for yachts of any size, while the country’s outside EU tax benefits (7% VAT on marine-related services, 0% VAT on charters, and duty free fuel) presents a powerful financial case for basing a yacht in Montenegro all year around.” One owner, well-known in Hong Kong and Singapore, keeps his 69m Feadship in Monaco, which some say is “on a par” with Montenegro. He revisited the Adriatic this summer and emailed us enthusiastically: “Terrific cruise. I had forgotten just how lovely this area is.”

Venice and Trieste lie at the northern end of this long narrow sea between Italy and the former Yugoslavia. Ancona on the Italian side hosts a superyacht yard enclave, but really, the Adriatic Coast means Slovenia, Croatia, Bosnia-Herzegovina, Montenegro and Albania down to the Greek island of Corfu.

Since the so-called “Balkan Wars” 25 years ago, these countries have been independent. Best-known are the Croatian cities of Zadar, Split and Dubrovnik, which is next door to Montenegro, but there are also 1,300 islands and inlets and tiny towns that make cruising here such a delight, and it is possible to charter small sailboats as well as superyachts.

Mid-summer can be hot, and this is when many Europeans take holidays, so visiting before or after is recommended. The MYBA has taken to holding a Pop-Up Superyacht Show at Porto Montenegro in the first week of September, just before Cannes Yachting Festival. For those in the industry, try both. Next up is Genoa, and then Monaco Yacht Show, all within one very pleasant month.