British builder Fairline is rightly proud of its versatile new Targa 43 Open, which enables all aboard to enjoy the elements while cruising or at anchor.

Fairline’s reputation for building sportscruisers in the 40ft ballpark is second to none. In years gone by, the Targa moniker has been adhered to some of the finest boats of this type ever produced. 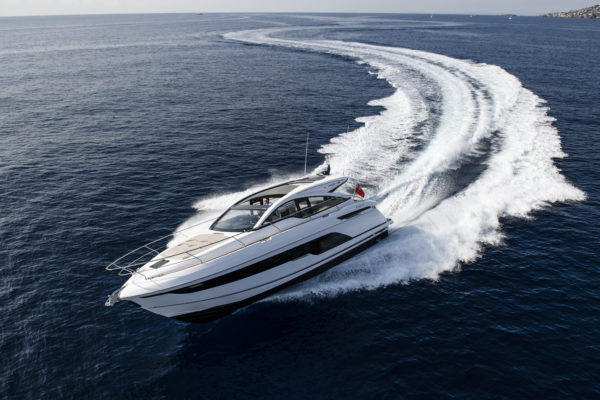 Think the Targa 34, its big sister the Targa 40, the evergreen Targa 47 and even the original Targa 43 – all best-in-class craft. As such, the new 43 Open came to market with a weight of expectation draped across its svelte shoulders.

Like Fairline’s flagship Targa 63 GTO, the exterior styling is by Italian Alberto Mancini and the 43 looks a scaled-down version. It shares the same distinctive window design and sweeping roofline, which features a spectacularly large sunroof.

Below is a cockpit that maximises the boat’s 14ft 2in beam, over 1ft wider than the Targa 44 that it (technically) replaces. The cockpit is open to the elements, encouraging the rush of water and cooling breeze to be part of the experience rather than sealing them out like so many modern sportscruisers do. 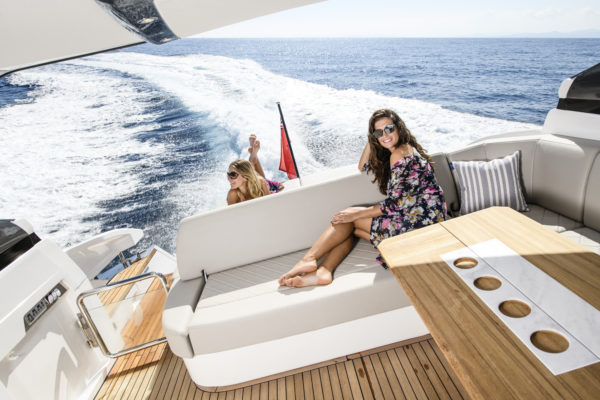 The cockpit-cum-saloon open is open above and aft, where there’s a large sunpad

It has a tender garage large enough for a Williams Minijet, but also the option of a hydraulic bathing platform with the capacity to stow a jet-ski or Seabob.

On top of the tender garage is a large, double sunpad with a two-way backrest that can push forward to create a sloping headrest for when guests want to recline.

The teak table can be concealed behind the dinette seating in a matter of seconds by removing the cushions and folding it away. The aft-facing seat next to the wetbar has a detachable seat cushion, so it can be drawn up to the table to create an extra dining space.

The 43 is a tall boat – although this is well disguised – and this results in a fabulous feeling of space below deck. 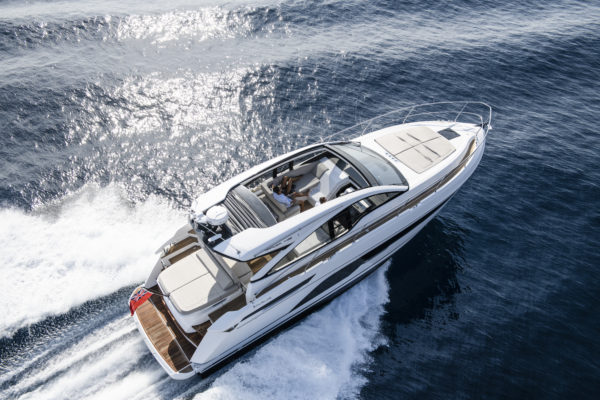 The yacht is a joy to drive with the sunroof open

Either of the two cabins can be nominated as the master by sectioning off the bathroom to limit day head access. Choosing the midships cabin as the master feels the best configuration as this puts day head access to the forward bathroom within the saloon bulkhead, which is convenient and also breaks up the wall of timber.

Nowhere is the headroom more welcome than in the full-beam midships cabin. Apart from a small intrusion at its aft end, there is room for those over 6ft to walk – without stooping – around the bed, which is arranged across the centreline, not along it.

This is a cabin blessed with plentiful storage due mostly to the arrangement of floor-to-ceiling wardrobes at the forward end.

The VIP in the bow doesn’t enjoy quite the same amount of floor space as the mid-cabin, but it’s just as well endowed with storage and natural light. It’s also versatile, offering scissor-action berths that allow you to convert the bed from a double to a pair of singles in a matter of seconds. 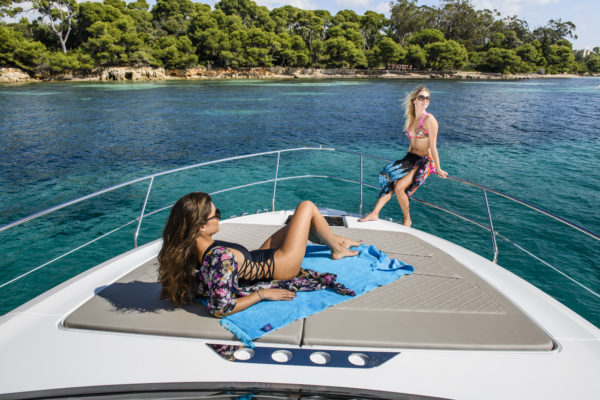 The saloon bombards you with generously lacquered glossy timber (matt alternatives are available) and high-quality materials.

Attention to detail and top-drawer finishing was a Fairline hallmark that had begun to slip under the watch of the yard’s previous owner. The lustre is back now and the 43 Open feels every inch the premium product that its price tag alludes to.

Volvo Penta’s 435hp IPS600 pods are the only engine option available and though performance isn’t exactly searing, progress is refined and easy.

We topped out at 31 knots with 80 per cent fuel and full water tanks plus the Williams jet tender in the garage, but it’s at 20-24 knots that the boat relaxes into its most comfortable cruising gait. 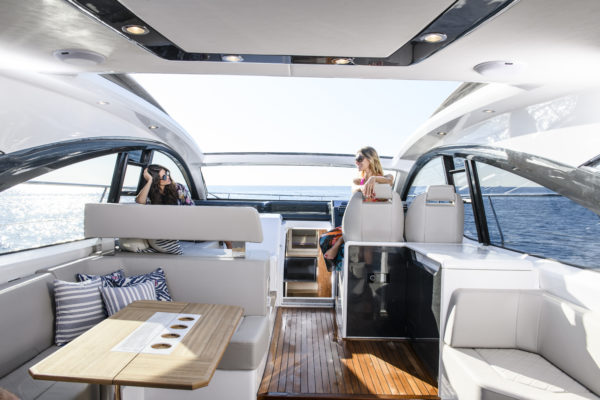 The interior features seating around a dining table, and a sofa by the helm

The engines are turning at around 3,000rpm and their hum melts into the background as the boat romps along, racking up the miles effortlessly. Conditions on the day of our test were kind, but an underlying swell gave the hull something to contend with, as did the wash of passing boats, which it dispensed with nonchalantly.

Despite the lack of cockpit doors and even with that enormous sunroof open, the helmsman can chat to passengers sitting on the L-shaped sofa adjacent without having to raise their voice over engine or wind noise.

This refinement is as crucial to long-distance cruising as a good ride and comfortable driving position, because having to shout over engine racket can get tiring after a while. There’s no such issue with the Targa.

The driving position is well suited to longer jaunts as the seated position is so comfortable and also easy to adjust on its powered pedestal. A folding step allows you to stand at the helm if needed, but the lack of bolster means it’s not that comfortable for long periods. 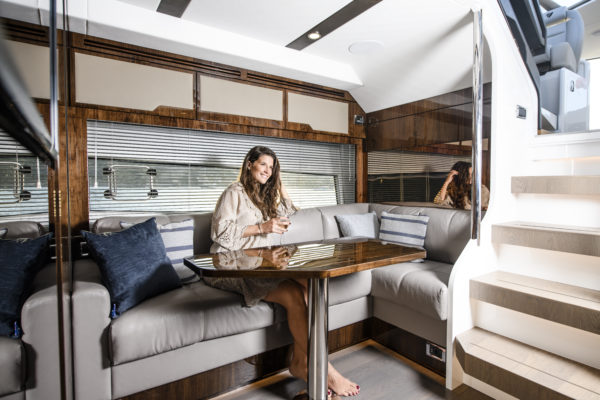 The lower deck features a dining area opposite the galley

The dashboard is clearly laid out and attractive, with the major controls placed within easy reach of the helmsman. The adjustable seat and steering wheel mean no matter the size and shape of the skipper, they will be able to get comfortable.

The driver sits just off the centre line, with the navigator outboard and in line with the chartplotter. However, this means the person driving has to move out of the way to let them in and out.

The handling is light and accurate, with just enough heel in the turns to have a bit of fun, but nothing that’s going to lead to a loss of control. It isn’t the most exciting sportsboat to drive, but it’s controlled and predictable, more of a laid-back cruiser than a twitchy driving machine.

With the DNA of Fairline’s previous Targas coursing through its veins and some Mancini magic sprinkled on top, it’s a fair bet that it will succeed. 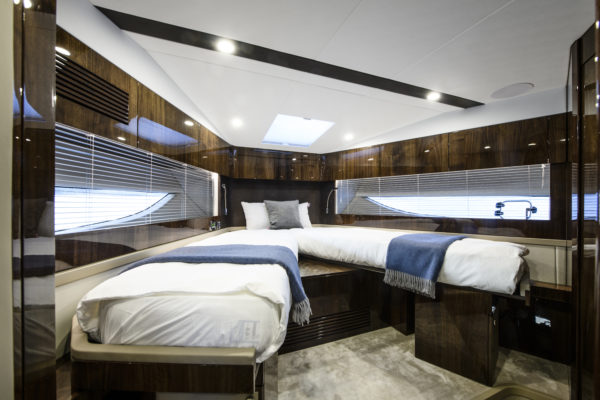 The VIP bow cabin has great storage and natural light, and scissor-action berths