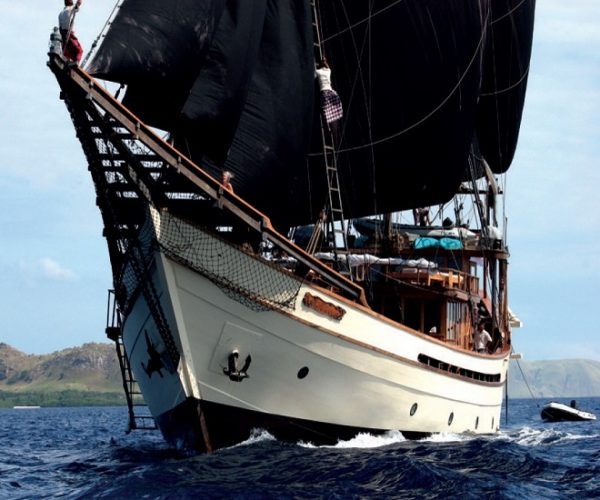 This huge bay, in what is known as the Bird’s Head of New Guinea Island, because of its distinct shape, is a little east of the Raja Ampat region, now known to divers worldwide for its remarkable marine diversity. Leading the project is Dr Mark Erdmann, Conservation International’s Vice President of Asia-Pacific Marine Programs.

Though now based in New Zealand after 23 years in Indonesia, he is still intimately involved with the Bird’s Head “Seascape” and frequently disappears into its remote corners for weeks. His partner is Shawn Heinrichs, an Emmy Award-winning cinematographer, photographer and marine conservationist. An independent filmmaker, Heinrichs is founder of Blue Sphere Media, a production company specialising in underwater, adventure and conservation media. His work was recently featured in the film Racing Extinction. 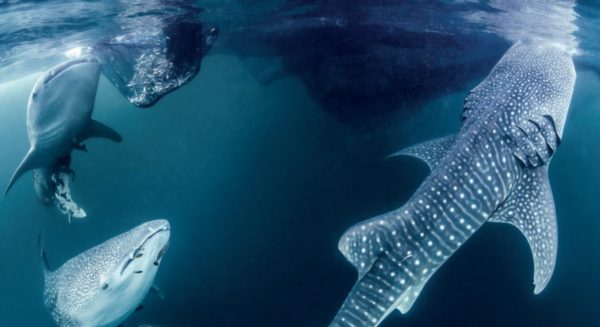 In a media release last month, Erdmann and Heinrichs reported that in the last five years, “Cenderawasih Bay’s friendly whale shark population has been attracting a lot of attention, primarily because of the near-certainty of having outstanding and lengthy whale shark encounters during a visit to the region.

“These tags have an extended battery life which should provide data for up to two years, and we’ve been delighted with their performance to date. 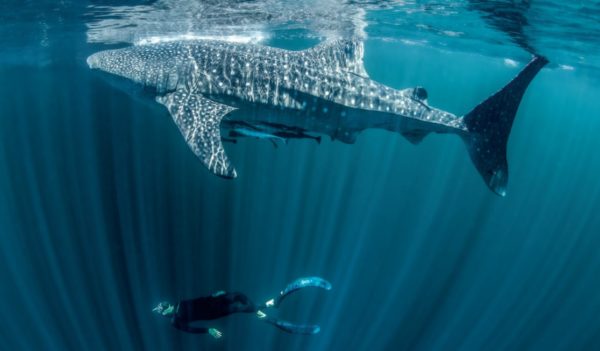 “All but one of the tags has been transmitting data very regularly, on average every 2-5 days, basically when one of the tagged sharks spends enough time on the surface for the tag to uplink to the ARGOS satellite network.

“Mounting a tag takes only 10-15 minutes, and is now providing real-time data on the shark’s movements and diving behaviour. “Initial data seemed to confirm what many suspected, that Cenderawasih whale sharks largely stay at home, preferring to remain close to shore and feed upon the abundant ikan puri baitfish schools that abound in the coastal bays and estuarine areas of the southern and eastern coastlines of Cendrawasih.

“This is of course is a great thing for marine tourism, as it means visitors can pretty much plan a trip any time of the year and have a very good chance of excellent whale shark interactions”. One of the more typical whale shark movement datasets, said Erdmann, showed a 4.5m dubbed Goris remaining continuously within the SE section of Cenderawasih Bay, venturing at one point north towards Yapen, but soon returning to Kwatisore waters.

Jude, a 7m male named in honour of diving enthusiast Judithe Bizot, took a “Christmas road-trip” down the coast to Jayapura, but then apparently became homesick and returned to Cenderawasih Bay. “Note the GPS positions in this track that appear slightly inland”, he said, “are not evidence of amphibious whale shark behaviour, but rather a result of several low-resolution satellite fixes with error margins over 50km”. 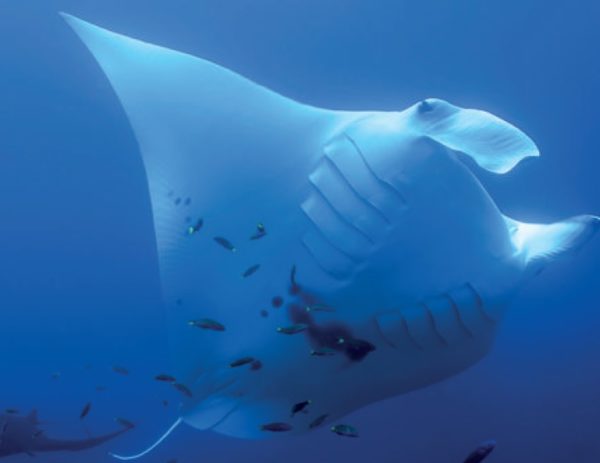 Mantas were spotted too

Wally, a 6m male tagged in late October 2015, had proven to be the most adventurous. He left the bay just before Christmas that year, almost simultaneously with Jude, and headed down the coast to Jayapura, but then crossed the border into Papue New Guinea, where he remains to this day on extended holiday near the Sepik River.

“Similarly, one of our most recently tagged whale sharks in mid- February, Ke’Opulupulu, headed almost immediately north into the center of the Bay, near the Auri Islands and atolls, then navigated to the south coast of Biak and Supiori Islands, where he’s remained for the past few weeks”. But horizontal movements are only part of the story. The past three months have also seen a dramatic increase in deep-diving behaviour of many of our tagged sharks.

“While we did previously report a 672m deep diving record in October, we’ve now seen four of our sharks venture below 1000m in depth, with the aptly-named Moby smashing the depth record, but fortunately not his tag’s depth gauge, at 1416m. 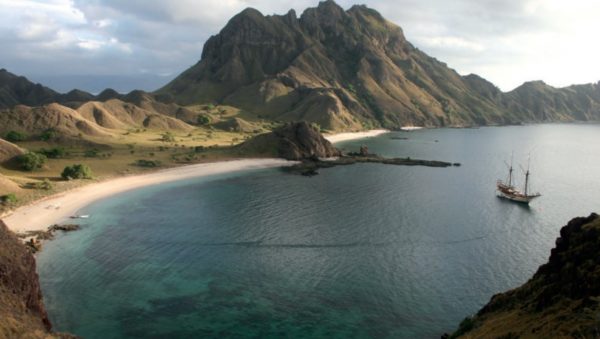 “Even the wee 3m Fijubeca has dived to 700m depth. It’s still not clear why the sharks have shown such deep diving behaviour over these past few months. Perhaps the El-Nino warmed surface waters are not providing enough food, and they are searching for deeper plankton”.

The author confirmed that well over 95 per cent of the sharks identified in Cenderawasih are juvenile or young adult males measuring 3-9m in total length, a situation which is reported from most of the main whale shark aggregations visited by tourists around the world. The whereabouts of the females and large adult males is unknown, though many scientists presume they spend their time in deeper waters.

Shawn Heinrichs commented that Silolona Sojourns has been a trusted and invaluable partner in supporting conservation work in Indonesia, most recently making available the gaff-rigged luxury traditional phinisi, Si Datu Bua, for an epic expedition from Cenderawasih Bay in Northwest Papua, around the Birds Head and down to Misool in SE Raja Ampat.

“Along the way, we documented whale sharks feeding beneath the fishing bagans in Cenderwasih Bay, rare and massive leatherback turtles nesting on one of the last great nesting beaches in all the Pacific, and giant oceanic manta rays aggregating on seamounts off Misool Eco Resort.

“Without the unwavering support of Patti Seery and the incredible service of the Silolona team, this expedition would not have been possible”.

Ms Seery, an American, is herself something of a legend, having explored many remote parts of the world and settling in Indonesia when her oil industry husband worked for Pertamina. Inspired by the commercial phinisis at Sunda Kelapa harbour in Jakarta, she decided in the early 2000s to build a luxury one to ply the world’s largest archipelago. Says the Silolona Sojourns website:
“Silolona is a powerful hand-crafted traditional wooden sailing vessel, built from the finest tropical hardwoods to German Lloyds specifications by the Master Konjo boat builders of Sulawesi. “This magnificent vessel melds the best of the traditional spice islands sailing craft with all the modern amenities and safety features one would expect in a vessel of her quality.

“Silolona’s tastefully appointed decor, spacious decks, delightful Asian fusion cuisine, full range of aquatic activities, and the smiles of her dedicated professional crew provide the perfect setting for Patti Seery’s sojourns of discovery. This is one of the most successful and sought-after travel experiences in Southeast Asia”.

The vessel was launched in July 2004, and has been chartering ever since. She has three superb king cabins and two twins. Si Datu Bua, which means Beloved Princess, joined Silolona in 2012, and has three similar king cabins. Based in Bali, cruising waters include primarily eastern waters of the 14,000 islands Indonesian archipelago, including Raja Ampat and the Spice Islands.