Christofle Yacht Style Awards 2019 in Thailand held at Café Del Mar Phuket is a momentous occasion for yachting brands in the region. A sterling attendance from the region’s yachting community.

Many of Asia’s leading luxury yachting companies and the world’s top shipyards were among the 15 winners to lift an iconic Mood trophy by title sponsor Christofle at Café Del Mar Phuket, which provided a glamorous setting on Kamala Beach. Over 350 VIPs including yacht owners and key figures in the industry attended the spectacular evening, which included a fire show. Chapter Two in Singapore in April will feature another 15 categories.

Gael Burlot, CEO and Publisher of Yacht Style, organiser of the Awards, said: “Yacht Style is about innovation, and we have expanded this year’s Christofle Yacht Style Awards to cover two chapters in two countries. I’m delighted that Chapter One at Café Del Mar Phuket was such a huge success, with a really spectacular attendance and beachside setting. “We had a really impressive guest list from around Asia and beyond. There was a really high standard of nominees for each award and we had 15 deserving winners, although the competition was really close in many categories.” 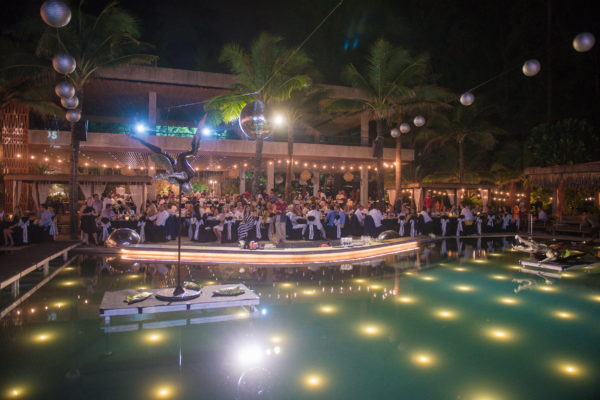 Pool area at Cafe Del Mar was decorated to a hilt

“It was rewarding to see just how many leading shipyards are selling or bringing brand-new models into Asia faster than ever. This is an exciting time for yachting in the region for many reasons and it’s great that Phuket, Southeast Asia’s cruising hub, was the home of Chapter One of the Awards.” The yachting community was feted with a night of revelry, fine food and wines

Christofle, closely associated with yachting in Asia since 2005, embodies French Art de Vivre and elegance through its creations in silver, including Mood, the iconic egg-shaped cutlery holder that’s one of the most distinctive trophies in yachting. From tableware to home decoration and exceptional jewellery pieces, Christofle remains loyal to the spirit of its founders who cherished modernity and innovation in creation and production – all values celebrated in the Christofle Yacht Style Awards. Read about 2018’s winners here.