Now that Mercedes has fully redesigned the C-Class sedan, it’s time for the coupe version to face some radical changes. 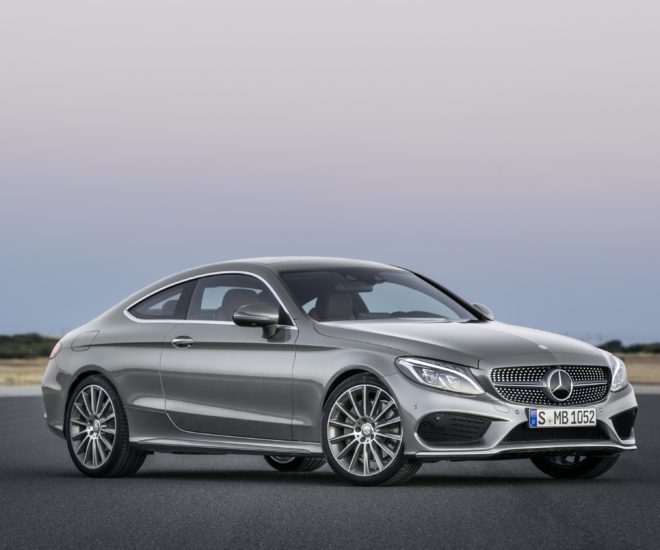 The C Class sedan, on which the new car is based, is already the most refined and technologically advanced car in its segment and with the new variation, Mercedes is now throwing a little aggression into the mix.

The coupe is sportier, sits lower — 15mm lower to be precise — and its higher waistline gives it a clearly different stance. As does the fact that it’s actually longer and wider than the outgoing coupé.

These larger dimensions mean that despite the sharply sloping roof, passengers won’t feel too cramped, even in the back. Inside, the front seats have been developed specifically for the new model. They have a sporty feel and boast integrated headrests and seat belt feeders. In the back, there are two individual seats rather than the three found in the rear of the sedan.

Under the hood there is an initial choice of four four-cylinder petrol and two four-cylinder diesel engines, the pick of which is the 245hp C 300.

But a V6 and potentially a V8 AMG engine are also expected to join the mix in 2016, for those who want something even sportier still. As well as powerplants, the list of semi-autonomous and active driver safety systems offers a huge choice. The car can be specified with Distronic Plus that can essentially take over the driving and steering in stop-and-go congestion situations, maintain a safe distance between vehicles when traveling at speed, keep the car in lane and watch out for traffic at junctions and intersections.

Standard safety systems include Attention Assist, which keeps a watchful eye over the driver to make sure he or she isn’t feeling drowsy and inattentive, plus an autonomous braking system that can increase braking force if a collision is imminent or brake entirely autonomously if the driver fails to react. The system can work at speeds of up to 200kph at lower speeds can also mitigate rear-end shunts.