The German automobile firm will roll out its soft-top variant of the AMG GT series, complete with more power and upgraded features. 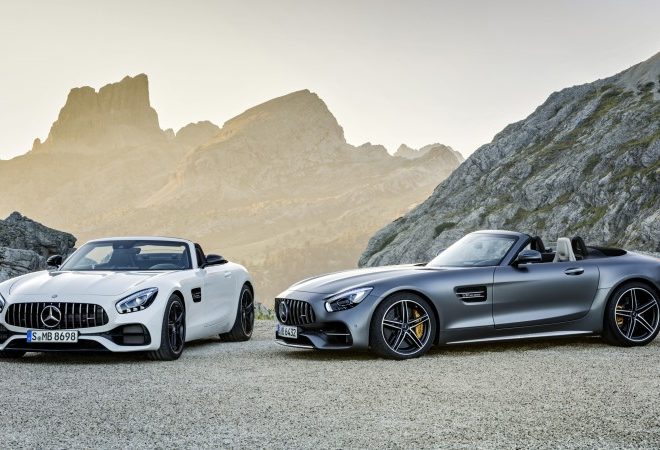 It looks like the good guys at Mercedes and AMG are really stepping up their game. Not since the Mercedes-AMG GT series has its cars commanded such a presence. Sure, the distinctively long bonnet might seem a bit in-your-face, and the gullwing doors were kind of boisterous, but not once have we thought, “maybe the AMG-GT would look better with a shorter bonnet, or how awful are those doors?” We’d bet our last dollar you were too busy gaping. If you aren’t a fan of the latter, however, you’d be happy to know that the German automobile giant has done away with gullwing doors for the all-new open-top version of its namesake in two variants: the Mercedes-AMG GT Roadster and GT C Roadster. The former stands as the series’ base model, and packs 469 hp – not quite a jump from the base AMG GT coupe’s 456 – while the latter is a feistier 549 hp. That’s 46 hp more than the GT S Coupe, but 28 hp less than the GT R version. In the GT C Roadster, expect to hit nought to 60 mph in 3.7 seconds and achieve a top speed of 196 mph. Comparatively, the standard version achieves the same in 4.0 seconds and tops out at 188mph; both new figures are possible thanks to the 4.0-liter twin-turbo V8 under the roadster’s mile-long bonnet. The AMG-GT Roadster borrows several features from its GT R brethren, such as the rear-wheel driving system and the active aero flaps behind the front bumper that minimize drag and maximize cooling. Otherwise, expect features like AMG’s performance exhaust and electronic differential as standard, more rear width (to accommodate larger wheels) and a shorter first gear ratio for its seven-speed twin clutch. An active pop-up rear spoiler will control the ride based on speed and transmission mode. The retractable roof can also now be lowered and raised in 11 seconds at a maximum speed of 30mph. These drop-top GTs will only be available next year, so you’d have to make do with a poster first, but expect to fork out a little over the GT S Coupe’s $132,000 base model for the GT C Roadster. The base GT Roadster will also see a premium over the GT Coupe model.