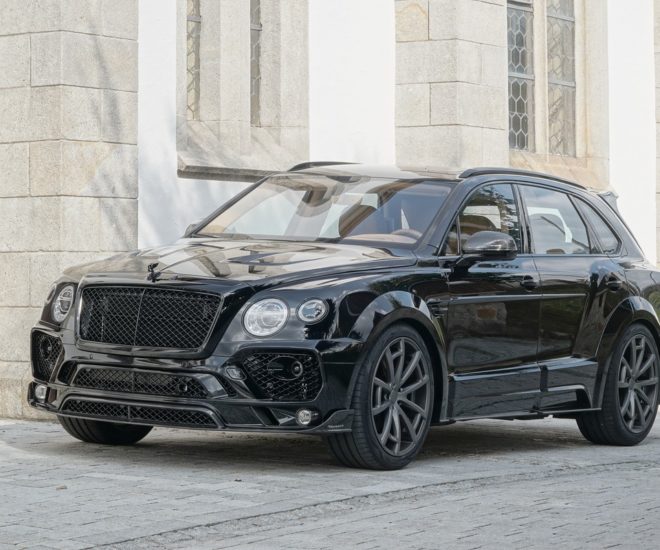 Let’s talk about the specifications. The ‘standard’ Bentayga is five meters long, nearly two meters wide and stands 1.7 meters tall. It sports a 6-liter W12 engine, giving it a capacity to reach 100km/h in 4.0 seconds, with top speed of 190mph. Mansory’s tweaked the base Bentayga powerplant to the tune of 700hp (100 more than the standard Bentayga) which increases the car’s top speed to 190mph. The torque is also boosted to 1050Nm.

However, it is Mansory’s visual treatment that stands out. In Mansory’s iteration, the Bentayga is covered with a carbon fiber outerwear – from the grille, front apron (including bumper and chin spoiler) and the hood. New side skirt and and rear wheel arch extensions give the vehicle the illusion of a wider front. The Bentley Bentayga also sports two spoilers, one on the tailgate and one mounted on the roof, for a better ride in high speeds and hard corners. A new carbon fiber diffuser and rear bumper package that cover the custom exhaust system add extra support in this regard. The car sits on newly created lightweight 22-inch wheels that have been diamond cut and designed to optimize brake cooling. Mansory also added a new wood and leather steering wheel, re-upholstered seats and individually designed, hand-stitched interior surfaces in this variant. Overall, the Mansory Bentley Bentayga does stand out – in a world where expressing one’s individuality has never been greater.