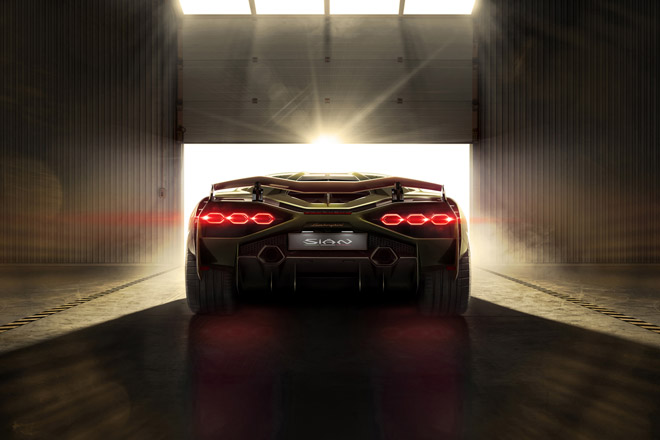 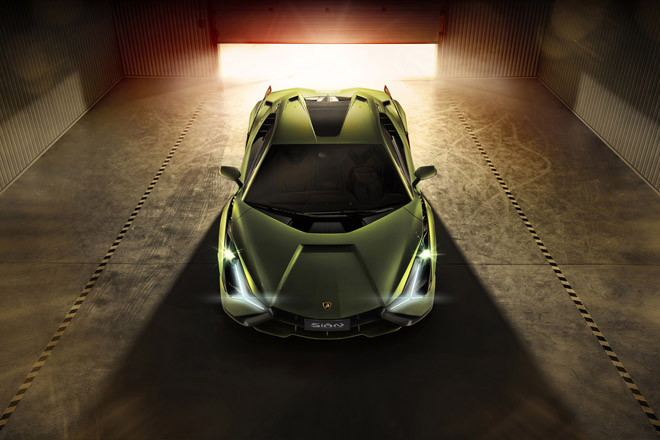 BREAKING: The Lamborghini Sian, the new hybrid super car from Sant’Agata Bolognese, is the brand’s fastest of all time. Drawing on futuristic technologies and aesthetics, the latest Lamborghini is powered by Sant’Agata’s signature V12 engine and powered by newly developed hybrid technologies which meets the criteria for increasing electrification while delivering the extraordinary emotions and dynamic performance of expected of a traditional super car.

Producing combined thermal and electric power of 819 hp (602 kW), the Sian celebrates a world’s first in the automobile industry thanks to the use of supercapacitor in hybrid electro-petrochemical solution and unique materials-science application.

“Not only does the Sián deliver a formidable hyper-car design and engineering tour de force today, it augments the potential for Lamborghini as a super sports car brand for tomorrow and for decades to come, even as hybridization becomes more desirable and inevitably essential. The Lamborghini Sián represents the first step in Lamborghini’s route to electrification, and expedites our next-generation V12 engine.” – Stefano Domenicali, Automobili Lamborghini Chairman and Chief Executive Officer. 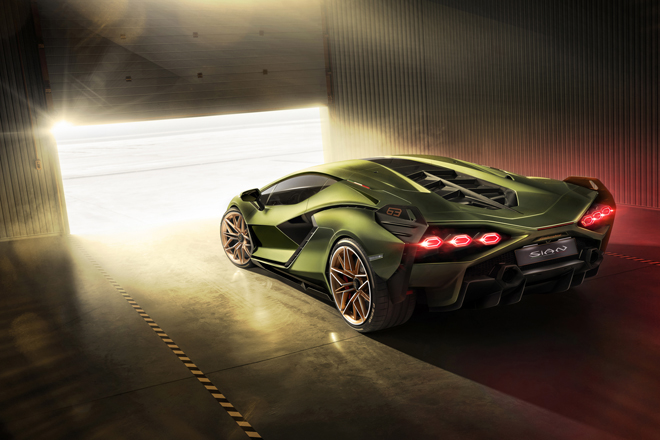 Sián, meaning flash or lightning in Bolognese dialect, references Sant’Agata’s first electric application in a Lamborghini most powerful production car ever. According to Maurizio Reggiani, Chief Technical Officer,  “Lamborghini is inherently a rule breaker, a challenger, always pushing what is possible to find a better solution. With the Sián we are defining our route to innovation and we are setting new rules in new technologies, instead of just following existing solutions. The result is the Lamborghini Sián, which includes the world-first application of a supercapacitor for hybridization and new materials technology.”

Indeed, in the new Lamborghini Sian, two engines, one electrical, the other petrochemical, work in close synergy starting from low-speed, delivering instant response and torque upon acceleration from standstill much like a standard electric car – reaching 100 km/h (62 mph) in less than 2.8 seconds. The hybridised tech continues into the upper spectrum, with traction force improved by up to 10% in third gear. In higher gears and lower speeds the electric motor increases traction force by up to 20%, reducing the 70 to 120 km/h acceleration by 1.2 seconds compared to the Aventador SVJ. 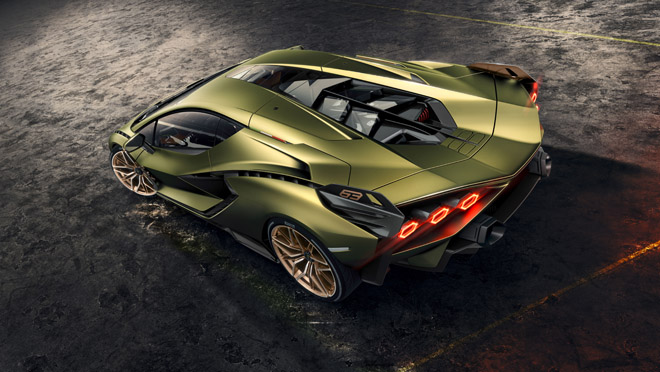 The Limited Edition of 63 production models, a nod to Automobili Lamborghini’s foundation year, keeps with the brand’s strategy in releasing very limited series cars as a commitment to exclusivity and also a showcase of best-in-class technologies and future innovations – early adopters get to enjoy advanced automotive solutions before they filter down into other models down the production road map.

Unveiled at the Frankfurt Motor Show, the Sian also enjoys the lowest weight-to-power ratio of the Lamborghini V12 family ever, made possible courtesy of two engines – the first, a 48 volt e-motor, delivering 34 hp, incorporated into the gearbox for instant front-end torque (and powerful reverse), a boon for those driven to be “first off the line”. This is the first time in any low-voltage hybrid that a direct connection has been made between electric motor and wheels. The other is of course, the brand’s top of the line V12 incorporating titanium intake valves uprated to 785 hp (577 kW) at 8,500 rpm: together – the hybrid super car delivers 819 hp (602 kW) with the soundtrack of a traditional super car as opposed to the deathly silence of an all electric engine. 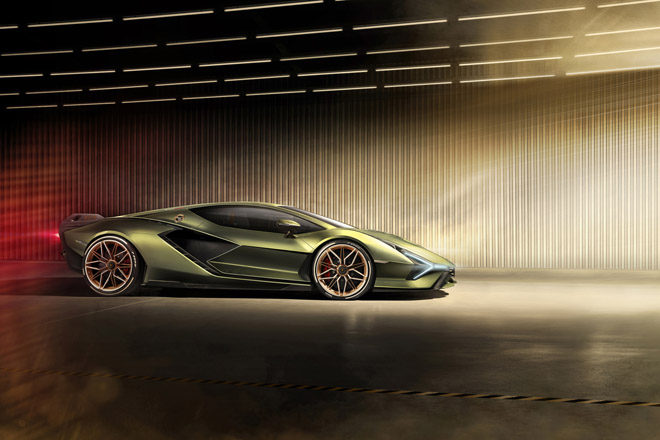 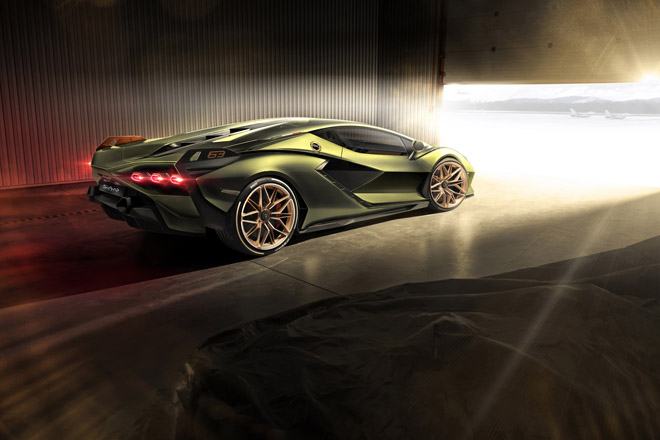 The energy accumulation technology within the Lamborghin Sian is another automotive world first. Rather than a lithium-ion battery the Sián uses a supercapacitor, a technology first pioneered in the Aventador but upgraded for the new Lamborghini hybrid super car to store ten times the power.

Three times more powerful than a battery of the same weight and three times lighter than a battery producing the same power, the Sian’s lightweight supercapacitor sits between cockpit and engine to ensure perfect weight distribution, delivering weight-to-power ratio of 1.0kg per horsepower. 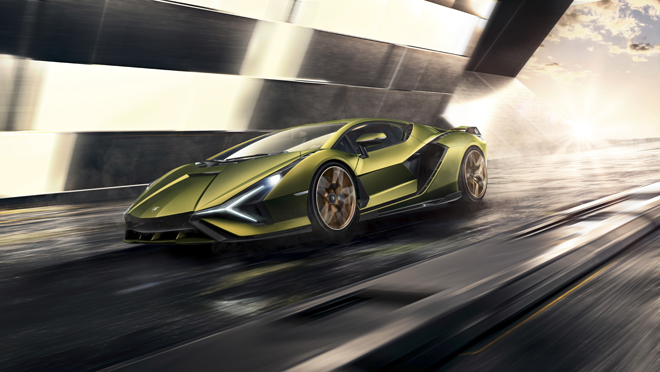 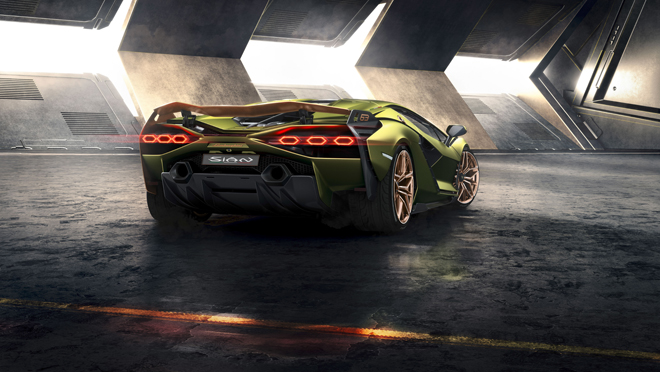 Incorporating a highly advanced regenerative braking system, the symmetric power flow of the hybrid super car’s supercapacitor not only assures charging and discharging efficiency but as a result also enjoys efficiencies from its highly advanced regenerative braking system where contrary to normal Li-Ion batteries can be charged and discharged with the same power, the Sián’s energy storage system is fully charged every time the vehicle brakes. This stored energy is then available as an instant “power boost”, allowing the driver to draw upon increased torque to accelerate up to 130 km/h before the e-motor disconnects allowing the Sian to be Lamborghini’s most nimble yet.

The Lamborghini Countach provides aesthetic muse in Lamborghini’s flagship hybrid introducing new aero wings while keeping its signature Gandini line recognisable in its profile. While the Sian is an entirely new creature, other Lamborghini design leitmotifs like the ‘Y’ shape can be seen in the NACA air inlets on the doors, glass elements are included in the engine cover, and the diagonal line features in the front hood, very much like the Countach. 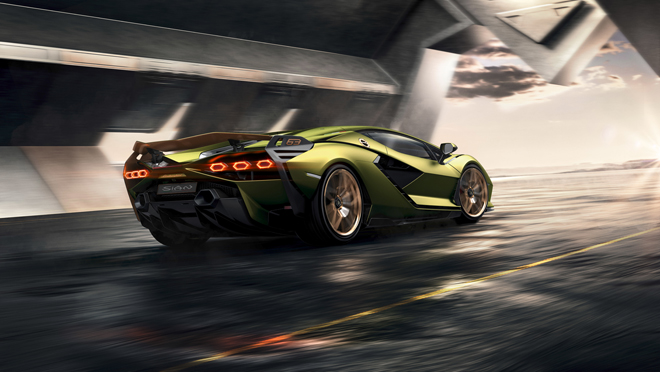 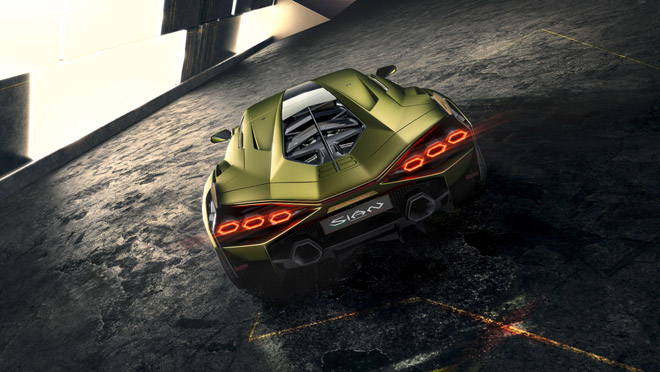 Undeniably futuristic, the Lamborghini Sian features a low front with integrated carbon fibre splitter dominated by the ‘Y’-shape headlights, used for the first time to reflect the signature design of the night lights. The rear incorporates the iconic Lamborghini hexagonal design with an integrated rear wing within the profile, extended during the drive and kept for a slim silhouette while parked.

Extremely aerodynamic, every design element of the hybrid super car contributes to performance from the ‘Periscopio’ tunnel that links with the slats of the rear engine cover, to the airflow is directed through the front splitters and through the front bonnet, through the side air intakes and outlets and over the rear spoiler, form follows function.

All 63 Lamborghini hybrid super cars will be custom-made, each styled to the owner’s specifications to create a bespoke model through Lamborghini Centro Stile in conjunction with Lamborghini Ad Personam.

The hybrid super car specimen displayed at the IAA in Frankfurt is exhibited in Verde Gea (green) with details in Oro Electrum (electric gold) visualising an electrified Lamborghini of the future. The car’s paint is a precious multilayer containing golden flakes and golden crystals, perfectly complementing its internal design.