Yes the new Porsche 718 Boxter is a flat-four turbocharged wonder that might just be the most powerful standard production model in its class. 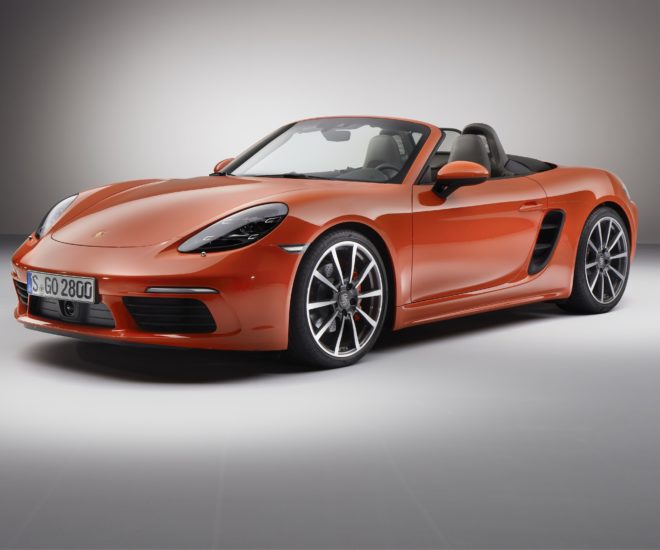 When the 718 Boxster and 718 Boxster S make their global debut at the Geneva Motor Show in March, they will do so with new names and totally new four- instead of six-cylinder engines. But before ardent Boxster fans start taking down their posters and researching the merits of a BMW Z4 instead, both cars boast more power, acceleration and torque as well as greater efficiency.

Thanks to very liberal use of turbocharging, Porsche had built a 2-liter flat-four engine that can deliver 300hp and for the S variant, a 2.5-litre unit that can output 350hp, that’s a 35hp increase compared with both outgoing models and a 13% increase in fuel efficiency.

As well as the engines, the chassis set-up has received some serious attention so that the car, regardless of engine size, offers more than just handling and poise. For example the Active Suspension Management system can drop the car’s ride height by 10mm or by 20mm for serious performance but it can also be set for comfortable, long-distance touring.

For this reason, the cabin has also taken a step up in terms of comfort. The Porsche Communication Management system is standard for instance.

Porsche is as much a cult as it is a car company. Its fans are devoted followers, but they are also traditionalists that expect certain elements of each model – be it the iconic 911’s engine position or the Boxster’s cylinder count to remain unchanged.

Unfortunately, tougher and tougher fuel economy and emissions rules mean that even the best automotive recipes need to be adjusted for the planet’s future health. And this is why as well as removing cylinders, the company has added the term ‘718′ to the cars’ names. This is to remind ardent fans that Porsche used to build incredible race cars with flat four-cylinder engines and that it’s simply reviving a tradition.

As for external aesthetics, the new cars are the best looking in the Boxster’s 20-year history. Their lines are sharper, more dynamic, giving the vehicles a much wider stance. In short, they finally have their own, clearly defined personality without straying too far from the traditional Porsche design DNA.