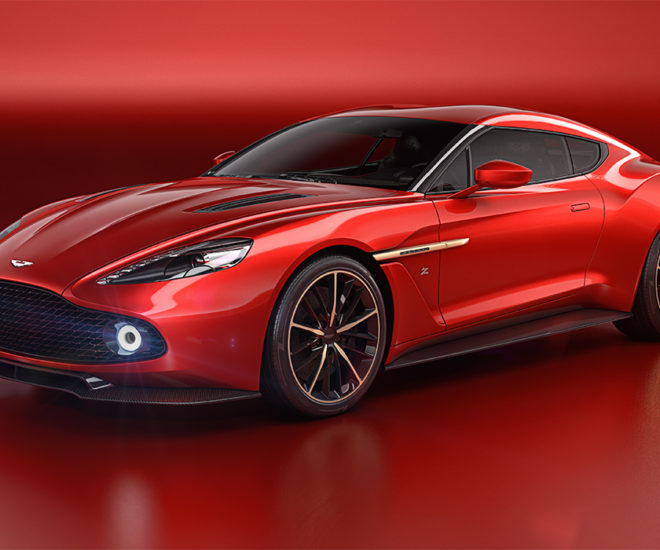 The world could use more cars like the Aston Martin Vanquish Zagato Concept. Something that would make looking out of a bus window a lot more enjoyable; something that could almost stop traffic. Well this collaboration between the Gaydon-based automaker Aston Martin and Italian coachbuilder Zagato can literally stop traffic, if traffic could ever catch up to it… (The Verge and Bloomberg are already calling it the most beautiful car of 2016 and it might just have our vote too – Ed) Not since the Aston Martin V12 Vantage Zagato in 2013 have the two fabled marques – Aston Martin and Zagato – embarked on a collaboration. Launched in Italy’s prestigious Concorso d’Eleganza Villa d’Este, the new grand tourer, in a breath-taking shade of red, shone in all its muscular beauty. The brainchild of Aston Martin’s Marek Reichman and Andrea Zagato, the car is based on – as its name suggests – the Vanquish, only upgraded with several of the Italian coachbuilding company’s design trademarks. And yes, “concept” is part of the name but the car is not just a glint in a designer’s eye. Coachbuilders specialize in bodywork and that is what you get here. The entirely carbon fiber body is given a seamless overhaul with massive panels that serve to reduce the number of split lines, complete with a glasshouse that’s shaped like a visor (because, sport). The roof also rocks the ‘double bubble’, a subtle indentation synonymous with Zagato since it was first introduced to its models in the fifties. Its quad exhausts sit nestled amongst the carbon fiber sills that wrap around the body. Paying tribute to its equally sexy cousins at Aston Martin, the wing mirrors invoke the One-77, while its side strakes, the DB11. Tail lights that hark to the “bladed” look of the Vulcan’s are also part of the deal.

At the heart of the special edition is a 6.0-liter, naturally-aspirated V12-engine that produces 592bhp, capable of going from 0 – 62kmh in staggering 3.8 seconds. This is an upgrade from the 568hp by the production Vanquish and generates supercar-like acceleration. And because everyone knows the Aston Martin Vanquish Zagato Concept will set you back by an eye-watering figure, the good guys at Aston Martin have included herringbone carbon fiber and luxurious anodized bronze leather to the facia, vents and rotary dials to remind you of it. The interior also sees embossed and embroidered ‘Z’ quilt patterns on seat, doors and headrests so you ride in absolute luxury. Just be sure to have your seatbelt on, for obvious reasons. The car is fitted with the Vanquish’s usual features— a spectacular center console controlling all aspects of the interior environment, a Bang & Olufsen sound system, and the AMi III infortainment system; but when your V12 sounds that good, you don’t really need any music.