Venet is the latest special edition Bugatti Veyron based on the Grand Sport model. It is designed as an art car by French artist Bernar Venet. 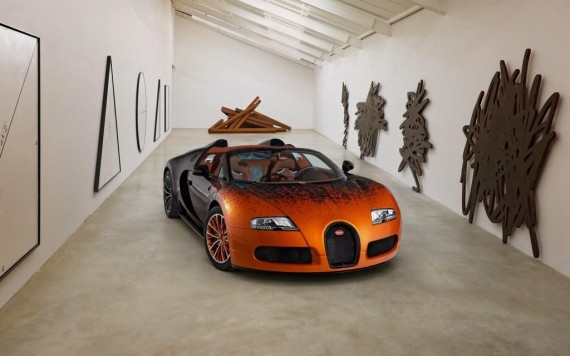 Bugatti has just released images and details of a special Bugatti Veyron Grand Sport made by artist Bernar Venet for Art Basel Miami 2012. Venet is an artist who’s long been fascinated with the concept of math and science as represented in art, so he wrapped the car’s exterior and interior with mathematical symbols and equations. The equations and mathematical formulas are said to be some of the same ones the Bugatti engineers used to make the Veyron one of the fastest cars in the world. They are spread over a rusted metal-like finish to give the Veyron a special look. This theme continues inside where the leather trim and dashboard panels have a rusted look, while the door panels have been covered by bright orange formulas. The vehicle’s actual tech side has remained unchanged, which means that the driver can play with the same W16 8.0-liter quad-turbo powerplant that delivers 1,001 hp. Venet-designed Veyron Grand Sport will be on display at the Rubell Family Collection in Miami during Art Basel Miami Beach 2012  from Dec. 6-9.