This new offering from Bentley combines rev and relaxation, and comes at us during the Geneva Motor Show in March. 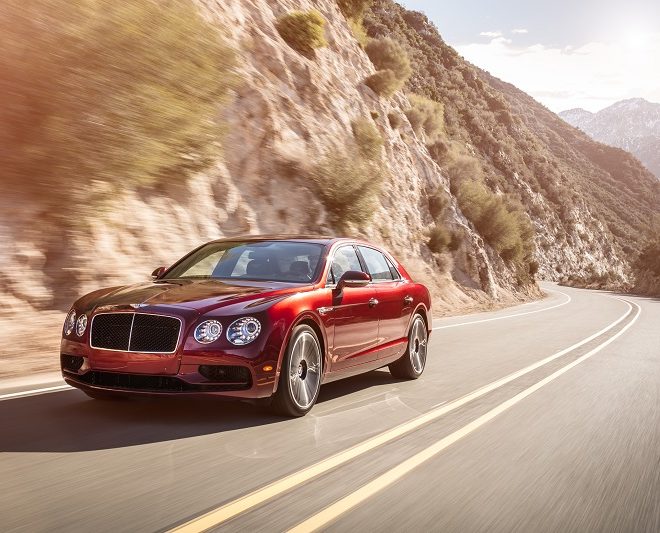 Buyers can expect a fiercer ride as Bentley’s third model for the Flying Spur series, the Flying Spur V8S, is set to make its debut at the Geneva Motor Show during a press conference March 1. A pitch-black finish on the radiator grille is a start, as is the rear diffuser (both a major change from Bentley’s standard models). Still, let’s unpack the rest of what this comfortable monster has in store for us. Yet for those thinking green or leaving a smaller carbon footprint, the V8S retains the impressive fuel economy and CO2 emissions of the old V8 engines. Fuel consumption stands at 10.9L/100km while emissions are rated at 254g/km. Furthermore, the new variable displacement triggers the system to balance fuel between its 8 cylinders. On cruising it switches to 4, and retains all the refinement, whereas when you need to pump it up, it seamlessly revs up to 8 again. In terms of dynamism and comfort, the car has never been sharper. A reworked suspension stops body roll, while backed up with a Continuous Damping Control (CDC) system to smoothen the bumps further. Spicier drivers will want to set it on ‘S’ mode, which automatically locks out the highest gear, giving more space to push things. Yet if the play is taken too far, and too many wrong moves are made, the electronic stability controls kicks in to save the day. As with other Bentley creations, it’s all about the owner. Clients can choose from various customizations, such as darker aggressive colors and cosmetic changes for both the interior and exterior. A luxurious and spacious cabin boasts advanced acoustics and electronic, while a Touch-Screen remote taps in to an extensive Rear Entertainment System. It even comes with a WiFi hotspot, making the V8S great for work-on-the-go and leisure anywhere. “The Flying Spur remains unrivalled in its ability to combine class-leading comfort with remarkable dynamic ability” claimed Wolfgang Dürheimer, the chairman and chief executive of Bentley Motors. We can expect them to be churning out the top luxury cars for the time to come.