If you were going to drop that kind of money on a classic car and only be allowed to drive it 45 days a year, you should put your money towards these 4 classic cars In Singapore, regulations state that classic cars are only allowed on the road up to 45 days per year. In addition to COEs and high taxation which often outstrip the value of the classic car, this makes classic car ownership the domain of only the ultra wealthy; in that sense, by virtue of never really seeing them driven on Singapore roads, the owner of a classic car is probably rarer than one who owns a Ferrari or Lamborghini.

That said, there are many classic cars in Singapore, there are websites for them as well (among them, a soon to be launched section on Luxuo), some of the cooler cars like a classic Mercedes Sport of a 1969 Mercedes Pagoda can cost over $100,000 to own and maintain thanks to the COE system and that’s not even inclusive of the road tax. For other less moneyed vintage car enthusiasts, the VW Beetles from the 60s are common and you can get those for under $20,000 inclusive of COE. In anycase, if you were going to drop that kind of money on a classic car and only be allowed to drive it 45 days a year, you should put your money towards these 4 classic cars to own – after all, what better way of maximising your chances of being seen or admired than in a 1974 De Tomaso, 1940 BMW 328 Roadster, 1965 Ford GT40 or 1952 Ferrari 342 America?

Because classic cars aren’t being produced anymore, spare parts and components will likely be more difficult to come by. So one can expect their vintage cars to spend lots of time in the workshops unless you’re a gearhead, keeping them pristine and well maintained. That said, the benefits of classic car ownership multiply with the opportunity to drive some of the best designed vehicular icons of our time sans the modern electronics which take the real handling experience out of a car – it’s a delectable mechanical feel which our modern cars can never reproduce. During the 1970s, there was no more passionate Ford collector in America than Floyd Moore of Glenville, Illinois. When the final De Tomaso Pantera L was scheduled to be built, Moore arranged to buy it. Moore requested a quite a few bespoke options for his 1974 De Tomaso Pantera L including Pantera Orange paint, as well as the no-charge equipment of a five-speed transmission, four-wheel power disc brakes, air conditioning, power windows, tinted glass, full instrumentation, and magnesium wheels. So passionate was he about his beloved De Tomaso Pantera L that he wrote a letter expressing concern over a customs delay, demanding that his car be kept in indoor storage, to prevent the car’s newly minted condition from deteriorating. As a result of meticulous maintenance, this classic Pantera is remarkably well-preserved, so much so that this 1974  De Tomaso Pantera L was recognised as an “immaculate survivor” at Concorso Italiano in 1999, and White Glove Concours honors at the same event in 2002. Understandable given that the classic car was only driven 16,905 miles in total and is even still on its factory set of Goodyear Arriva tires.

With 1,971 cc OHV, dry-sump inline six-cylinder engine, triple carburetors, four-speed manual gearbox and independent front suspension with transverse leaf spring, this 1940 BMW 328 Roadster is another classic car to own, and it’s currently up for bids at Worldwide Auctioneers for an estimated US$1.5 million to $2 million. During the mid 1930s, BMW began building a reputation for sporty grand tourers and roadsters. In 1935, BMW launched a series of 1.5-litre 315/1 and 1.9-litre 319/1 sports roadsters at the Berlin Auto Show. Impressively rakish, the two seaters not only stole the show in terms of aesthetics but beyond skin deep, their OHV six-cylinder engines paved the way for BMW to eventually build the classic 1940 BMW 328 Roadster.

Sharing the same wheelbase, twin-tube chassis and suspension layout as the 315 and 319, the 2.0 litre 328 heralded new hydraulically-actuated brakes for even better driving dynamics. Driven by Ernst Henne, the classic BMW 328 Roadster dominated its first race outing at the Nürburgring from start to finish.

“There are seven truly “great” cars, the ones fitted with sleek, lightweight bodies created by Carrozzeria Touring in Milan, most of which were rebodied cars, i.e. the first five or six 328s built from the prototype series.” – BMW historian Rainer Simons

In all-out racing form, BMW’s 328 competition cars rank among the most enigmatic and interesting ever conceived; The classic car was gifted with an exclusive new cross-flow cylinder head featuring efficient hemispherical combustion chambers and short horizontal pushrods operating the opposed exhaust valves from the engine’s single camshaft, giving  twin-cam performance with less complexity and lower cost. Case in point: A streamlined 328 won the two-litre class at the 24 Hours of Le Mans in 1939, and that same car, part of a five-car “works” team, won the 1940 Mille Miglia outright. With bodywork by Touring of Milan, a company which developed and introduced the type of body construction known as “Superleggera,” which translates to English as “super lightweight, these classic BMW roadsters have the metal skin of the body is stretched and rolled over a light, yet strong framework of steel tubing providing structure and shape, with the low weight normally associated with wooden body substructures. The high estimates are a reflection of the superlative maintenance for the classic 1940 BMW 328 Roadster. The body, chassis, and powertrain was entrusted to noted Chicago-area restoration expert Fran Roxas.

Winner of the 2003 Pebble Beach Concours d’Elegance award, this classic 1965 Ford GT40 Roadster equipped with 380 hp, 289 cu. in. V-8 engine with four Weber 48IDA carburetors, four-speed manual transmission and four-wheel independent suspension was recently sold by RM Sothebys for US$6.9 million (but definitely one to keep watch for in case another goes on the market), it is one of the seminal models in automotive history with provenance that encompasses beauty of exterior design, power and a legendary reputation for competition success. “GT/108 is one of the finest, and certainly rarest, examples of the Ford GT40 in existence. Its rarity value is stamped all over its history.” – Ronnie Spain, GT40 historian

Beyond its sensational appearance, this Ford GT40 Roadster is bequeathed with a groundbreaking mid/rear-engine layout of Detroit design and four consecutive victories at the 24-Hours of Le Mans under its rotary belt (pardon the pun); adding to its beloved status and stratospheric passion. This classic Ford GT40 is one of just six open-top GT40 Roadsters eventually constructed, reflecting Ford’s experimentation with the configuration to test for market appeal and salability, notable  as one of the 12 early prototype cars with the three-digit “GT” chassis number designations, as opposed to the “P” designation stamped on the Mark I production cars that soon followed.

In 1992, classic 1965 Ford GT40 Roadster was purchased by a well-known collector with discerning taste, driven occasionally and ideally maintained in a climate-controlled facility. It is a phenomenally original example of the rare GT40 roadster.

The first of six examples produced; among the rarest road-going Ferraris, this is the only 1952 Ferrari 342 America Cabriolet by Vignale with exceptional open coachwork with special design features. Auctioned by RM sothebys, this classic Ferrari 342 is among the earliest “ultra-Ferraris” to wear the America nameplate. Built with an extended 2,650-mm wheelbase to accommodate the enlarged 200-hp Lampredi V-12, this classic Ferrari 342 America Cabriolet saw a total production run of only six examples for clients like King Leopold of Belgium and Enzo Ferrari himself.

With bodywork by Vignale, this Ferrari 342 America features unique slotted taillights recessed into the fenders. The classic car was subsequently exported to the United States in the late 1950s or early 1960s, and acquired by T. Dan Smith of Los Angeles. The vintage Ferrari made its way through a few hands while enduring the ignominy of being refinished and modified until it was purchased later in 2007 by its current owners, and was restored in California in the current color scheme of metallic green and white, with a complementary white and green leather interior. Registering only 210 miles since its restoration, it has remained hidden away, aside from infrequent exhibitions at various West Coast shows and museums. The classic Ferrari 342 America Cabriolet has also been featured in Marcel Massini’s book, Ferrari by Vignale. The opportunity to acquire this vintage Ferrari is as rare as the car itself. 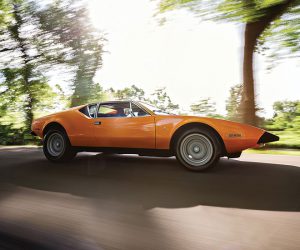 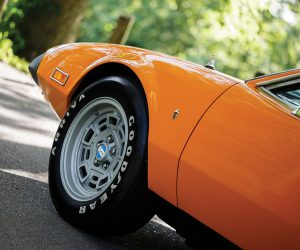 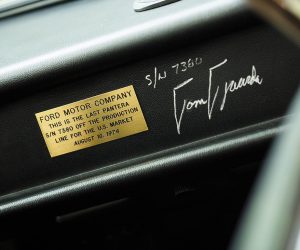 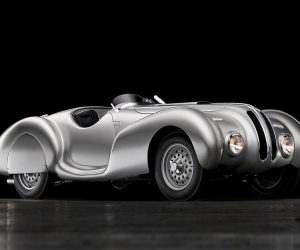 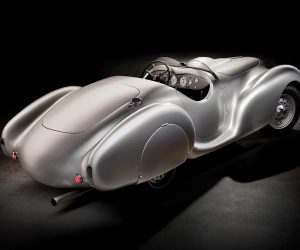 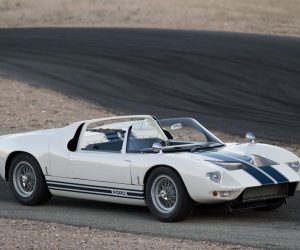 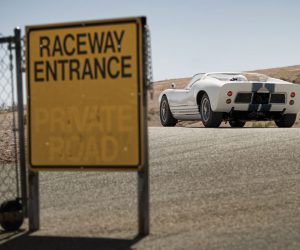 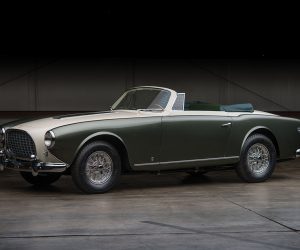 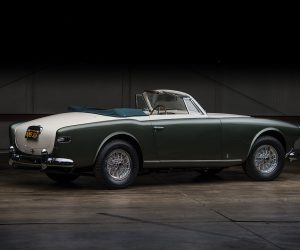 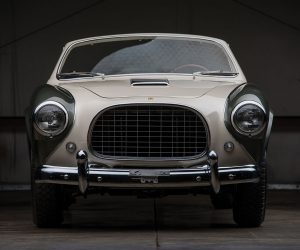 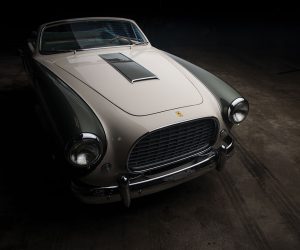 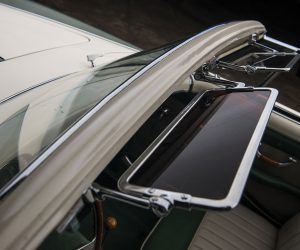 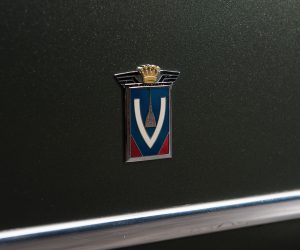 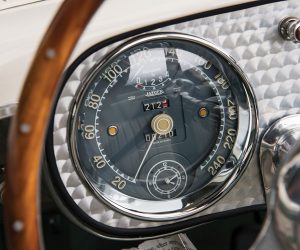 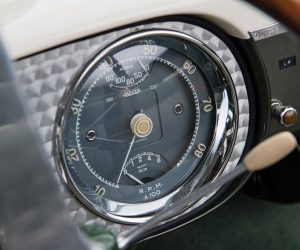