For the world’s high net worth elite, doomsday is like any other day, only that the views are different but the lodgings are still as luxurious. In the past survivalists and doomsday preppers with elaborate bunkers built to withstand a nuclear blasts were looked upon with derision. Then as gun sales and toilet paper robbery grew with the chaos gripped the United States thanks to the terrifying spread of coronavirus, survival bunkers are suddenly the stuff covered in the Wall Street Journal.

Europa One luxury survival bunkers are “Invite-Only”: Costing US$5 million

The coronavirus outbreak has led to “doomsday prepping” trending on Google search and if you’re in the global elite of high net worth top one percenters, your doomsday prep experience and even the options you have for survival shelters down are in whole other world compared to the average person. That said, surviving in luxury and style is going to cost you. Robert Vicino, CEO and founder of Vivos, a network of luxury survival bunkers tells us that for a spot in his top-of-the-line Vivos’ “invite only” ultra-luxury bunker – will set you back a cool US$5 million. 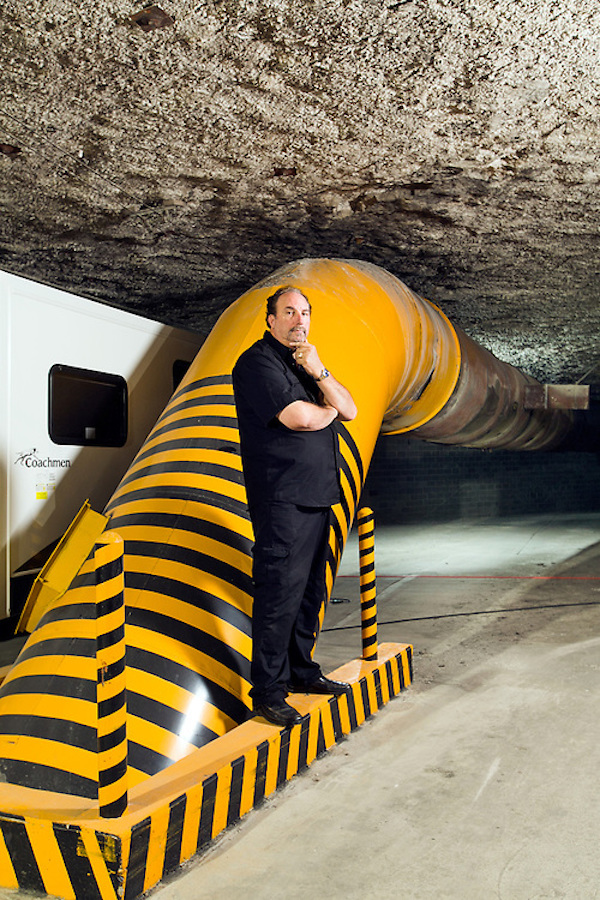 Robert Vicino, CEO and founder of Vivos, a network of luxury survival bunkers

Built by the Soviets during the Cold War, Vivos Europa One is an “invite only” ultra luxurious survival bunker located under a mountain.  Carved out of solid bedrock, the 76 acre above and below ground hardened facility was built to store munitions initially but after the fall of the Soviet Union, the facility was re-fashioned into an ultra luxurious doomsday shelter capable of withstanding climate change, nuclear weapons, earthquakes, chemical and biological agents. Yes – it’s the perfect hideout from something worse than the current coronavirus outbreak. 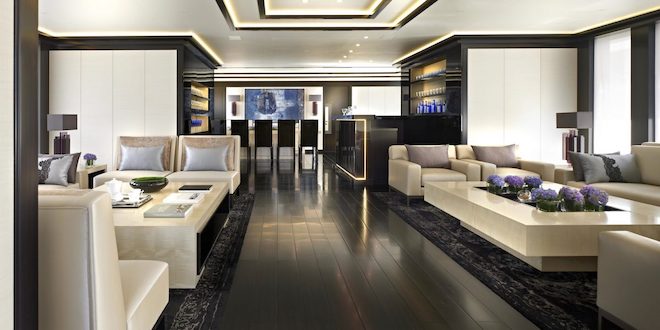 A modern day Noah’s Ark. , the Vivos Europa One is one of the world’s largest private underground shelter for long-term protection. For US$5 million, you get a 232m2 area – space enough to build two-story living quarters, with a build-out potential of up to 465m2.

In the past, it used to be that these survival spaces were sparse, often badly designed affairs but thanks to a growing mega-yacht industry, the fit and finish of these doomsday shelters have reached bespoke standards: other than the lousy view (because you’re ensconced under rock, investors of these luxury survival bunkers will find their new living environs comparable to their mega-yacht with the added bonus of amenities like swimming pools, theatres, and a gym. But when you’re working with a billionaire philanthropist investor, CEO Vicino knows that your survival plans cannot be half-baked and that your survival chances are raised when you’re toughing out the apocalypse in a community of fellow survivalists with the necessary and complementary skills – after all, you’re going to need mechanics, electricians, botanists, doctors and other assorted service personnel to keep civilisation going. “We shortlist people with useful skills. The more skills you have, the better – like a doctor who can hunt,” says Vicino. According to him, there have been over 50,000 applications. 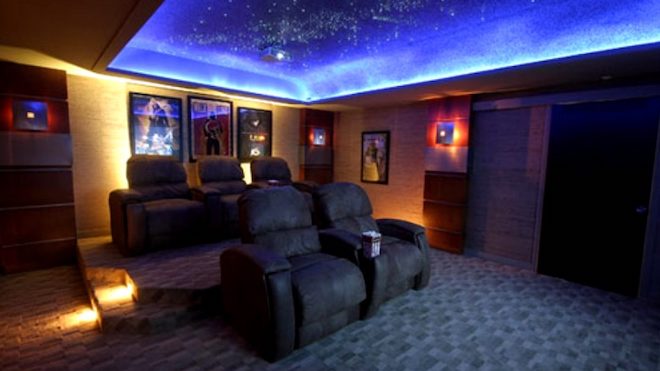 Plans to survive doomsday have evolved over the years, today, most of the Vivos survival bunkers have undisclosed locations – good idea since a key to defence and protection is that the ne’er-do-wells cannot find you, and they’re building new facilities in Argentina and Canada. But you don’t have to be a billionaire to be safe from the apocalypse, think Chris Pratt as mechanic Jim Preston in the movie Passengers – if you can’t pay your way in, you can have lower rates with the applicable skills and there are other less luxurious grades of survival services – Quantum, made for families or small groups, and Trine, for groups between 150 and 500 people. The most known is situated in South Dakota- 575 cement bunkers at Vivos xPoint each buried under thick grassland. The cost for a slot starts at $35,000, but residents will also have to pay $1,000 in annual fees. In 2008, millionaire entrepreneur Larry Hall bought a nuclear missile silo in Kansas for $300,000 with a view to converting the former nuclear storage and launch facility into a $20 million fortified shelter complete with essential amenities like a medical center, hydroponics farm, general store, and fishery. 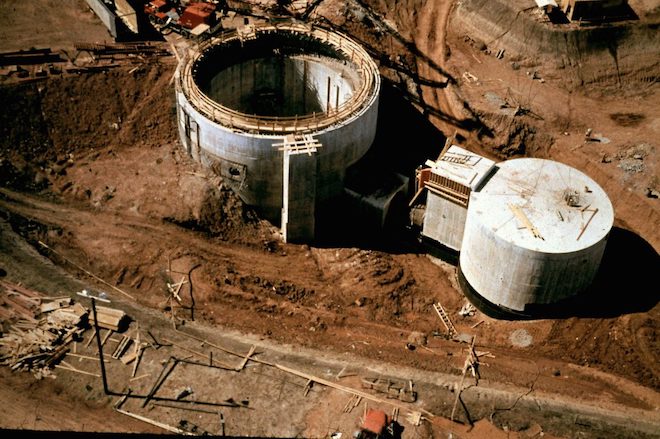 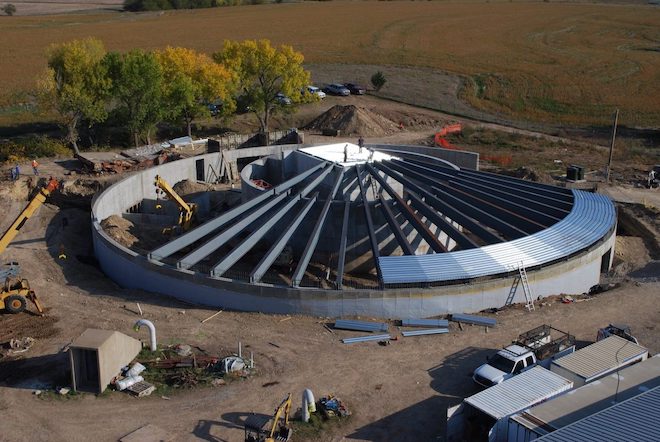 The Kansas missile silo housed a nuclear warhead from 1961 to 1965 and was built to withstand a direct nuclear blast. The September 11 attacks were a catalyst for Hall, who previously developed networks for government contractors, and when the government began serious catastrophe planning, he learned that former launch site was up for sale and he got serious about creating his Survival Condo. 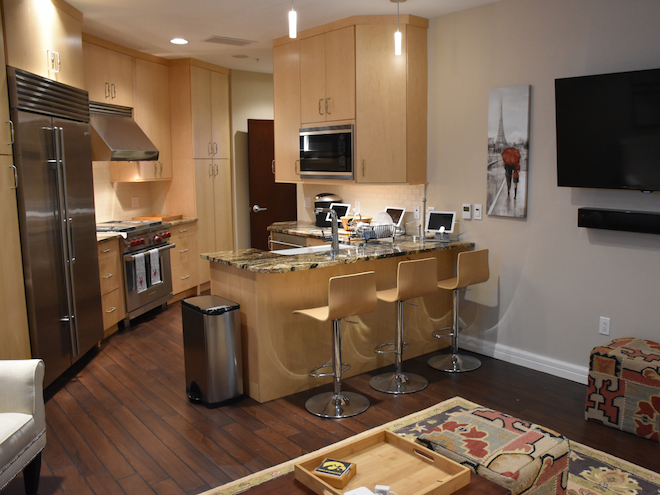 Hall’s Survival Condo divides the decommissioned Kansas nuclear silo into 15 floors, subdivided into 12 single-family homes as well as common areas. full-floor apartment includes three bedrooms, two baths, a kitchen, a dining room, and a great room; each condo is full kitted out with its own dishwasher, washer and dryer, and taking inspiration from dystopian sci-fi portrayals of the future, the rooms also come with “windows” which are really LED screens projecting scenery of your choice. 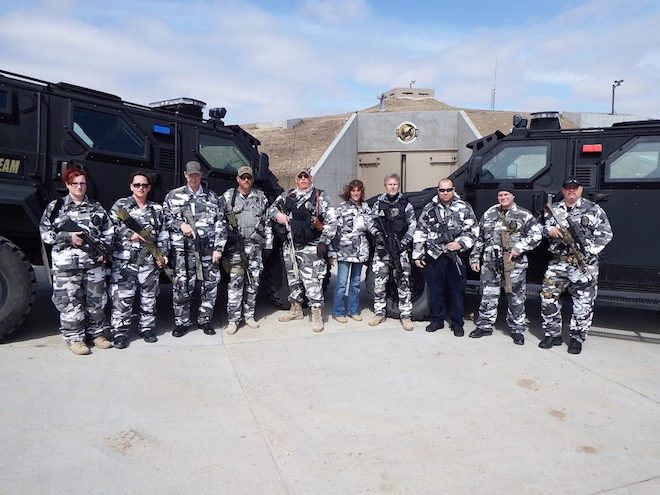 Survival Condo comes with its own armed security team 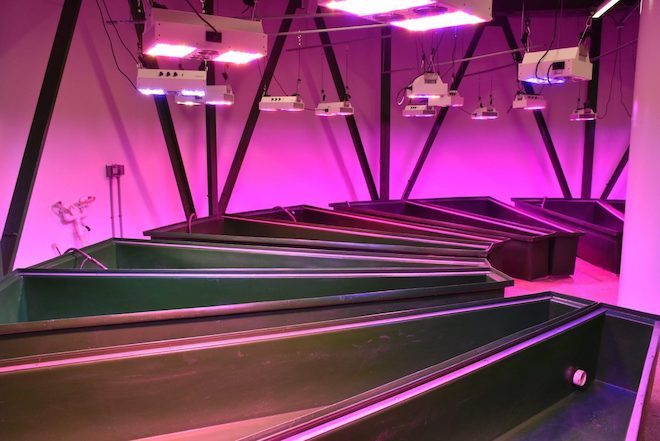 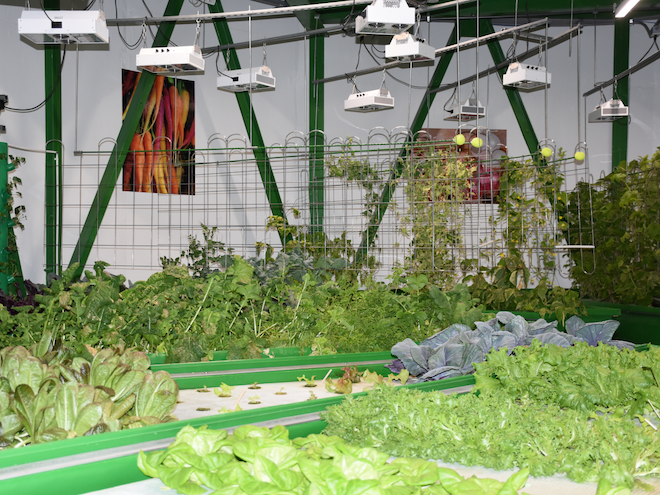 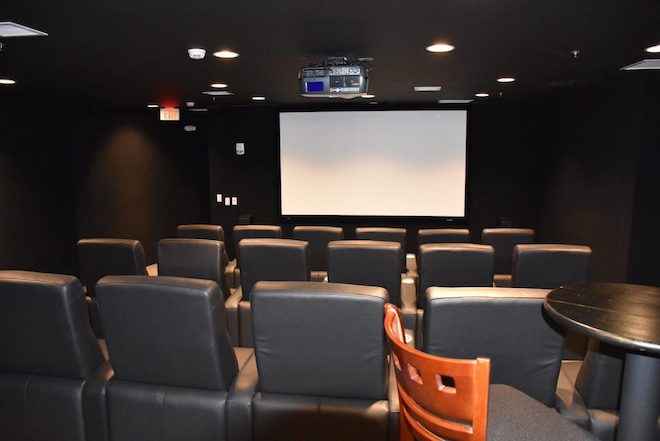 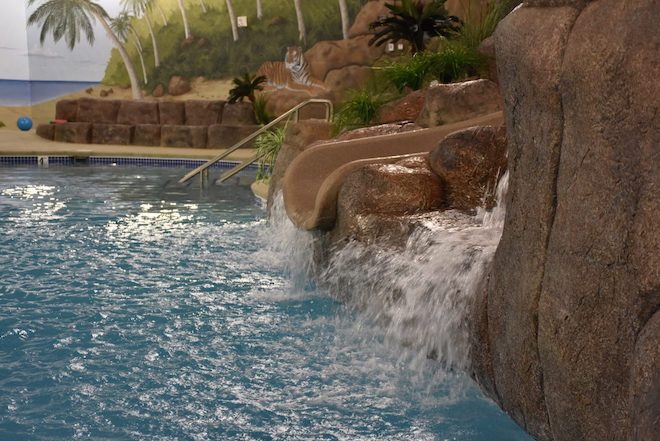 Indoor water park in addition to other ammenities

Like Vicino, Hall is also cogniscient that its not enough to be able to afford a spot in the survival condo, you have to be able to “hold you own” during armageddon. Every successful applicant undergoes mandatory survival training. Like Vivos survival bunkers, the exact location of the Survival Condo is unknown as well. But in the advent of an apocalypse-level emergency, armoured vehicles are ready to pick up Survival Condo owners within 400 miles of the doomsday bunker. 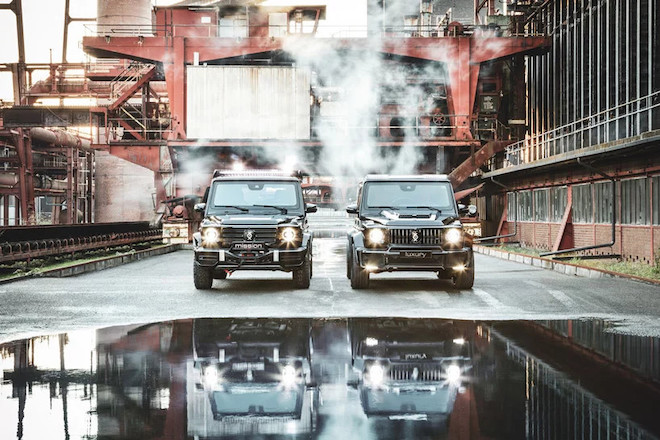 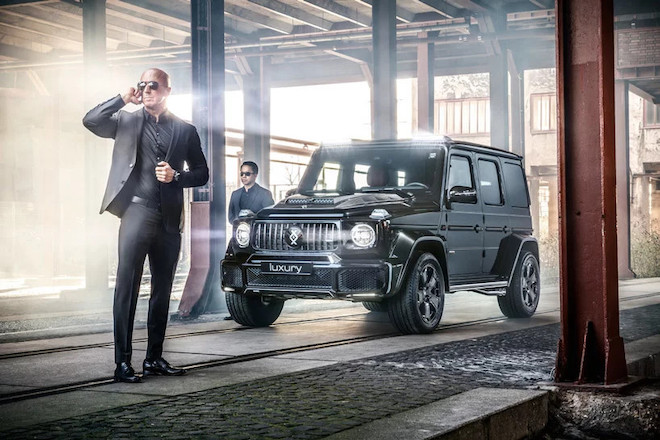 Invicto, Brabus’ first ever armoured vehicle is certified for VR6Plus resistance class. 1000kg atop a production model Mercedes-Benz G-class series, the armoured SUVs are all fitted with hot formed steel plate armour and 3D-printed protection parts – this means that without joints, there are no weak points for structural failure forming a “shelter cell” unlike other armoured cars on the market where components are individually welded to the body.

Since the Mercedes Benz G63 Invicto is rated VR6Plus, this means that the material overlaps, designed like a labyrinth, compensating and thus eliminating any spot of vulnerability. Translated: Plus means the Invicto is designated as ERV or Explosive Resistant Vehicle and can take gunfire from an AK47 shooting 7.62 millimeter iron core bullets while keeping its occupants secure. 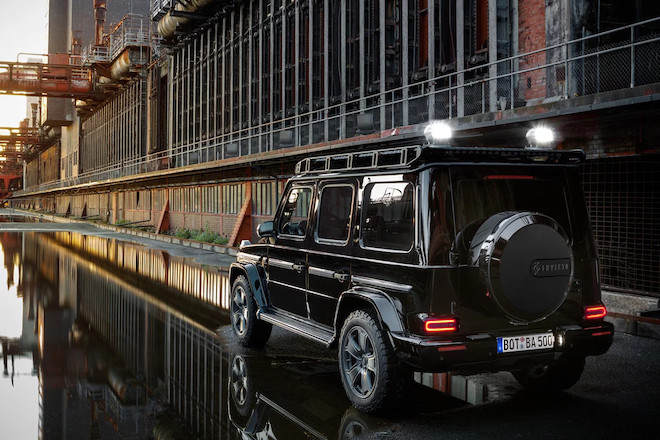 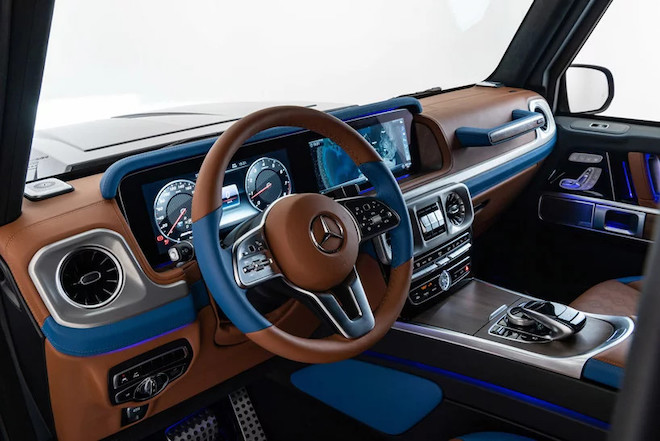 Available in three options all with the same level of protection but varied for its optional features, the Invicto Luxury series takes all the features of the Pure and Mission series, but includes customisation options including handcrafted interior, exterior trims such as lighting and signal systems, auxiliary roof lights, and other assorted aesthetic and performance upgrades.