Visitors to New York this summer will find something unusual even for this celebrated city â€” four monumental, man-made waterfalls in the East River along the shores of Brooklyn, Manhattan and Governors Island. Danish artist Olafur Eliasson is the creator of the public art, titled “The New York City Waterfalls,”. Commissioned by the Public Art […] 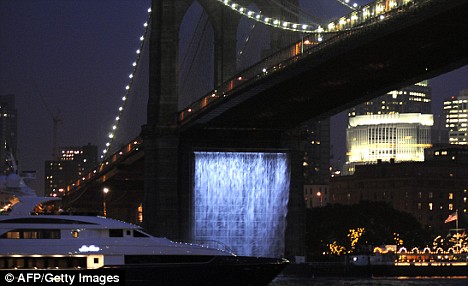 Visitors to New York this summer will find something unusual even for this celebrated city â€” four monumental, man-made waterfalls in the East River along the shores of Brooklyn, Manhattan and Governors Island.

Commissioned by the Public Art Fund (they cost about $15 million), the project is said to have been designed to protect water quality and aquatic life. Mayor Michael Bloomberg – unveiling the work last week – said: â€œNew York is a place where big ideas are realized [â€¦] These waterfalls will be just as awe-inspiring as any found in nature. They really must be seen to be believed.”

The waterfalls are between 80 feet and 120 feet high and will be installed temporarily on the Brooklyn anchorage of the Brooklyn Bridge, between Piers 4 and 5 below the Brooklyn Heights Promenade, in Lower Manhattan at Pier 35 north of the Manhattan Bridge and on the north shore of Governors Island. To be energy efficient, project organizers have pledged to use pumps powered by the East Riverâ€™s tidal water current and utilize low-impact lighting such as the LEDs used for the new New Yearâ€™s Ever ball.

Theyâ€™ll also tithe the guilt away by buying carbon offsets to neutralize the project’s emissions.

It is the city’s biggest public art project since artists Christo and Jeanne-Claude erected ‘The Gates’ in Central Park in 2005, adorning 23 miles of footpaths with 7,500 saffron panels. The waterworks will flow from 7am to 10pm seven days a week, will be lit after sunset, and operate from July to October.

A limited number of free tickets will be available every day for a boat tour of all four; anyone who misses out on the free ride can pay $10. The installation is expected to generate more than $60 million in tourism and economic activity.