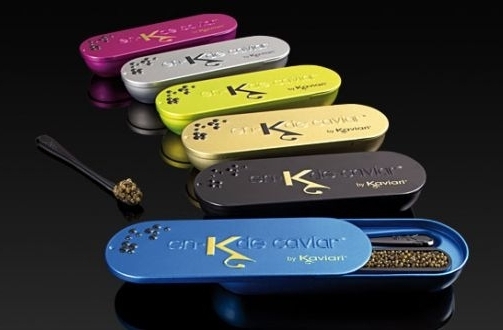 Luxury Parisian caviar purveyor Kaviari has launched small, portable tins of the delicacy for the traveling gourmand for whom caviar is an everyday, “dainty” snack.

As spotted by trendhunting site Springwise this week, En-K de caviar is a collection of six, 15 g Osetra caviar tins that come in different colors and a small serving spoon.

Osetra is one of the most expensive caviars on the market and comes from the Osetra sturgeon. It’s second only to the Beluga caviar as the most prized.

The En-K de caviar is described as amber to gold-colored. Grains are large and release sweet flavors of dried fruit notes followed by a hazelnut finish.

The tins are designed for the traveling gourmand to be taken as a poolside snack, on a picnic, in the hotel or on the plane for a “sensuous pause” during the day.