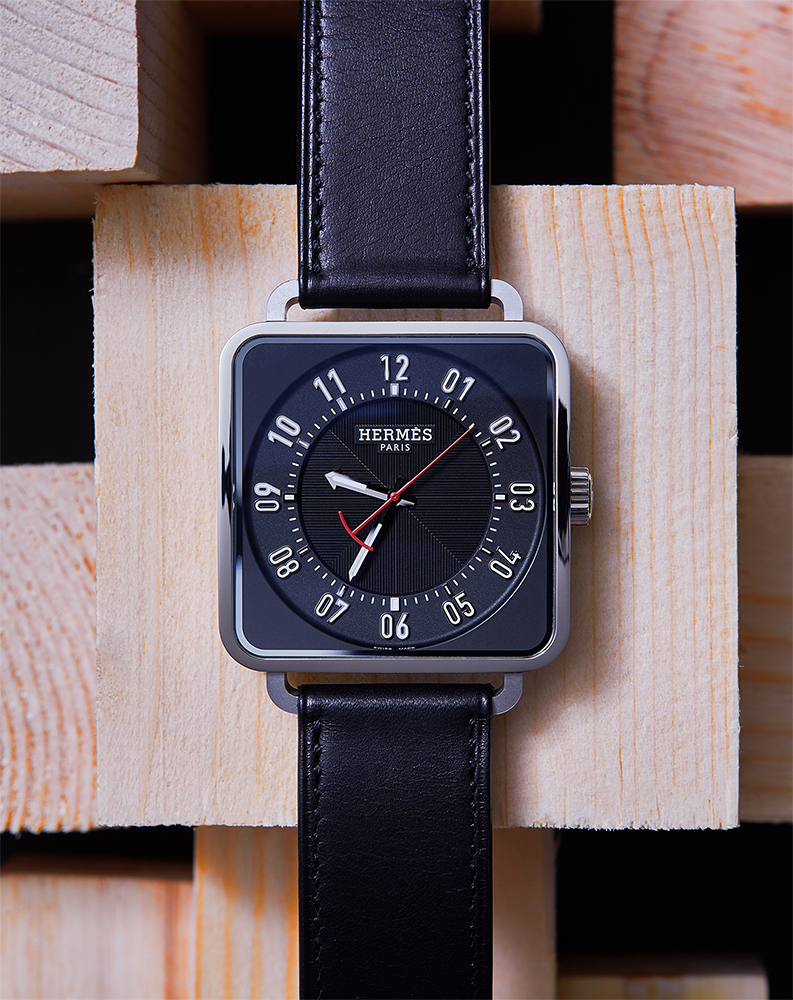 Raise your hand if you remember the Jaeger-LeCoultre Reverso Squadra from 2006. The Chronograph GMT and the Hometime? Both writers of this tale obviously do, and it meant something personal to them. The story that follows is mostly an account of WOW Thailand Editor Ruckdee Chotjinda’s hankering for a square watch, and WOW Singapore Editor Ashok Soman’s consistent evangelising for form watches. In this edition, we opted to present this account as a back-and-forth but it is Ruckdee’s story through-and-through. While Ruckdee finally found his square roots, Ashok has yet to embrace his; his contribution here is ruefully theoretical.

I was very close to owning the Jaeger-LeCoultre Squadra Hometime but then a few hiccups got in the way. First, the stock piece at the authorised dealer had cosmetic damage; then, the replacement ordered had a wobbly crown stem and had to be returned. I became discouraged and went for another watch instead. Before I acted again on the Reverso Squadra, Jaeger-LeCoultre dropped the collection five years into its age. It was gone … just like that, depriving me of the joy of ownership. 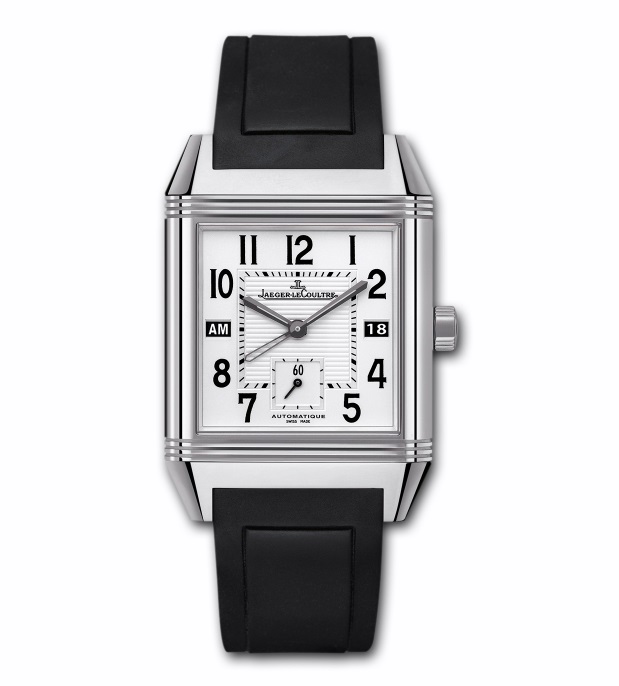 The urge to buy a square watch has since remained in the back of my mind. The Tetra watches from Nomos Glashütte seemed nice and accessible, but all versions are too small for my preference. I came very close to buying my first square watch again in 2016 when Cartier came out with the (then) new version of the Santos 100 Carbon. I remember how the watch lingered on my mind during my days at SIHH that year, and how I was eager to share a wrist shot on my personal Facebook account by using the phone to take a snap from the camera’s playback screen.

I salute Ruckdee on his good taste in going for the Squadra Hometime; it is a watch I remember well because it too was on my list. Sadly, it never made it to my wrist. I thought I would eventually get to it but, as mentioned, it disappeared quietly into Jaeger-LeCoultre’s archive. I confess that the watch did not quite inspire a taste for square watches at that time, but I do recall being similarly struck by the JeanRichard TV screen model. Of course that too is a tale of disappointment because the brand is now quite defunct. It seemed my story too was destined to follow a path to disappointment.

Contrary to popular belief, square watches are not difficult to wear

Sticking to my limit of one watch per year, a showdown emerged between the Santos and another round watch with impeccable movement finishing. It just so happened that I discussed this dilemma with a Singaporean colleague and he pushed me over the proverbial cliff where another watch awaited at the bottom. It was a good buy alright, but my square watch count remained at zero. Cartier also discontinued that particular model of Santos — the story of my life. 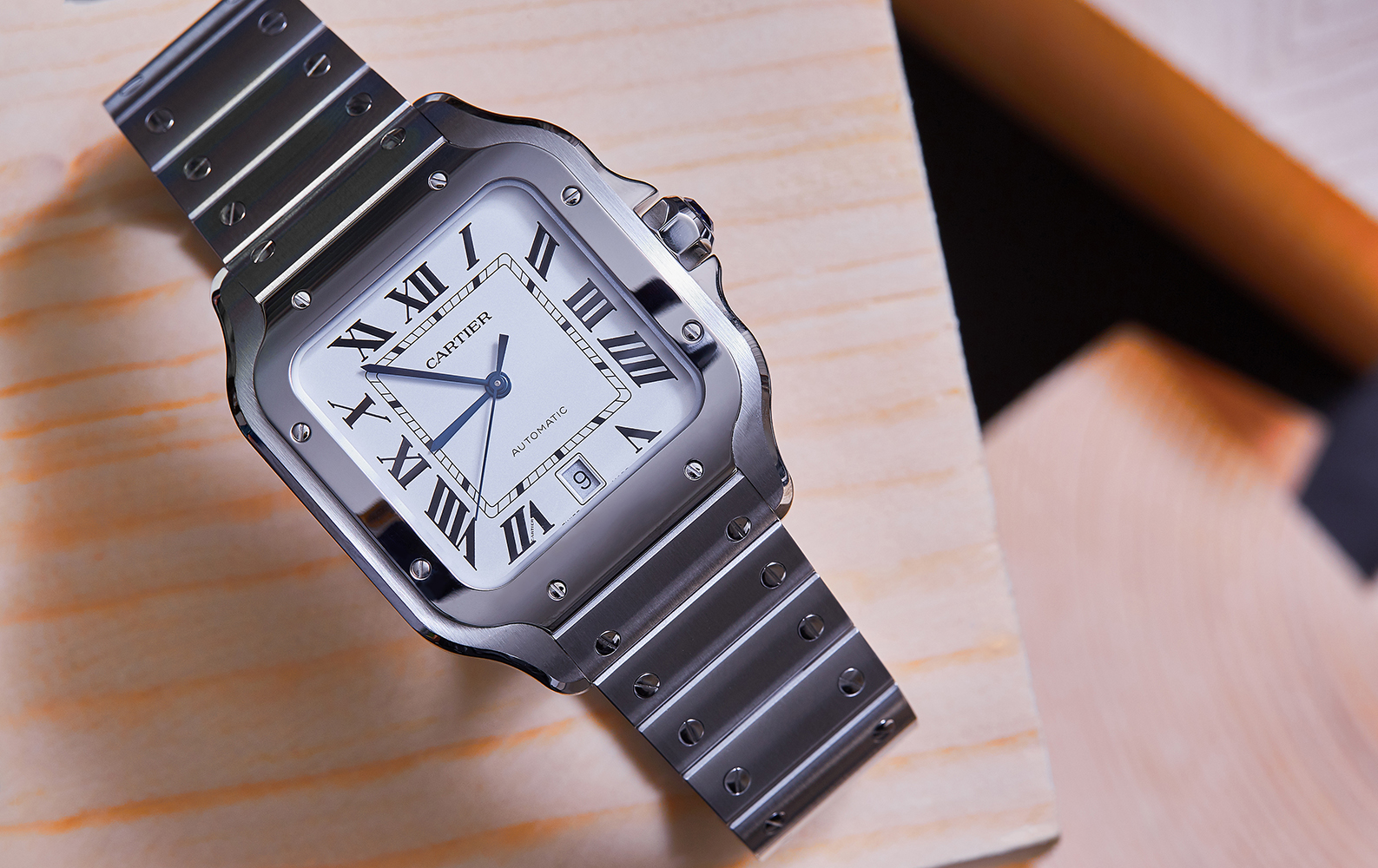 I confess to not being the colleague Ruckdee is referring to! Anyway, the Santos 100 Carbon was yet another watch that was gone too soon, and from another brand that built its reputation on form watches. A number of years passed before I found a worthy piece to target, and that watch was neither square nor in current production. Happily, Ruckdee had better luck.

I eventually became the proud owner of a square watch last November. The impromptu decision while on a business trip was induced by the particularly strong Thai baht at the time. The final amount paid was very good, even when adding the necessary Thai tax upon my return to Thailand. Just two weeks later, I coincidentally landed myself an incredible deal, thanks to the tip of a collector friend, and bought my second square watch unexpectedly. I am a happy man. 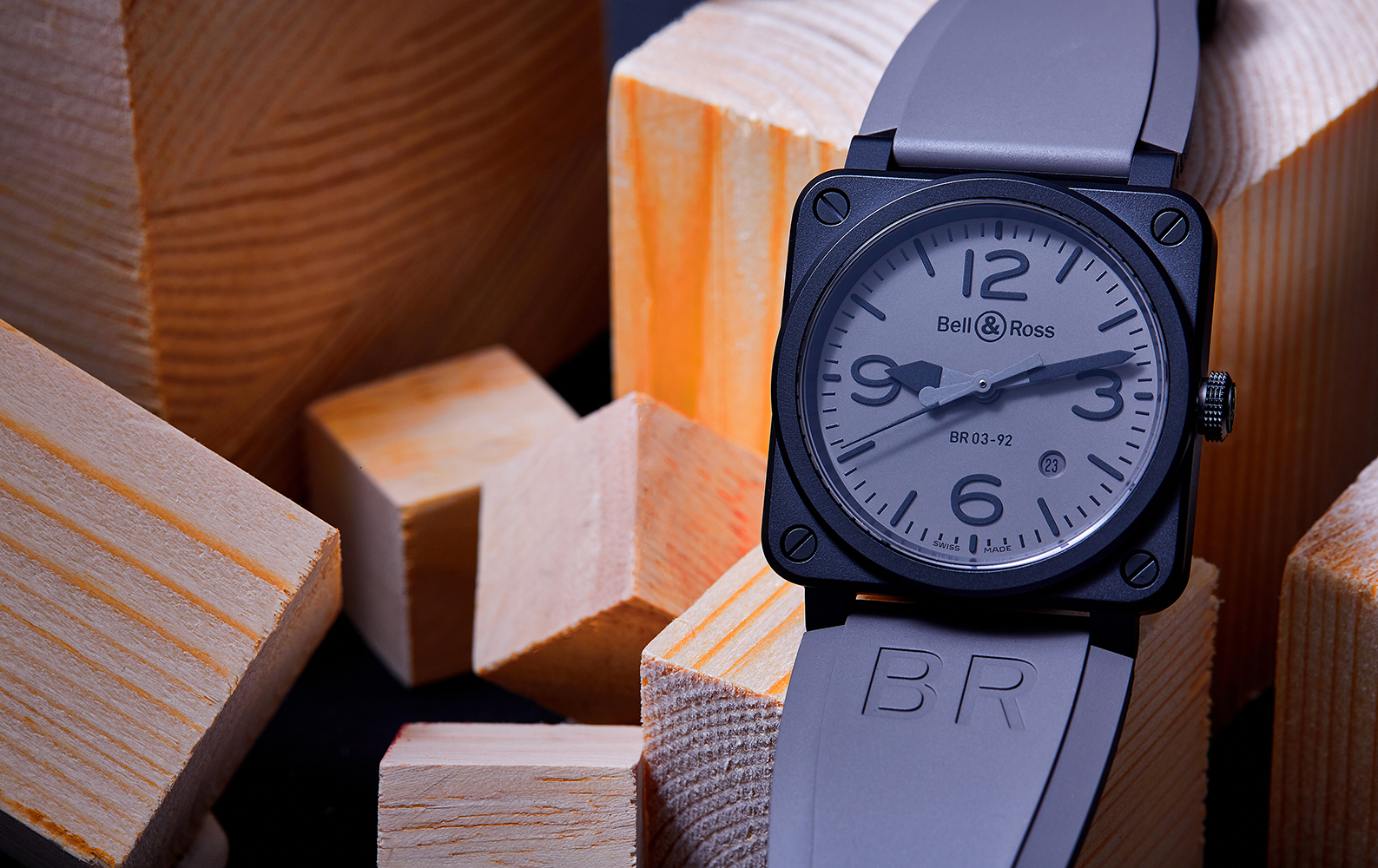 That is two-zip in Ruckdee’s favour; I am no closer today to even finding one square watch I like enough to make my list. To further complicate things, I decided to focus my collection towards German watches, or at least those with a suitably Teutonic bent, such as Schaffhausen brands IWC and H. Moser & Cie. Now, Nomos Glashütte has a great watch in the Tetra, as Ruckdee mentioned, but I wanted a movement that matched the case. This put me in a bind, because there are not that many German watchmakers and almost none have square watches in current collections. By extension, you will not find it hard to believe that none have form watches with form movements, much less something where all’s square, as they say.

Contrary to popular belief, square watches are not difficult to wear. That prejudice is formed on grounds of unfamiliarity. You put it on your wrist with the strap or the bracelet like any round watch, and off you go about your day. Size-wise, square watches can be too large or too small for your wrist, the same as round watches. Lastly, again like round watches, squarish ones come with different designs that give them distinguishing personalities.

The square watch genre is very small, even when compared against other shaped watches

Where this popular belief came from, I cannot say. Nor do I know why it should be popular at all. No one has ever suggested that the Rado Integral is difficult to wear, for example. The only real consideration is the lug-to-lug measurement, which could make any given watch sit rather awkwardly on the wrist. Honestly, this is an issue rectangular watches sometimes face (and some sorts of oval watches), not square ones. Bottom line: if a square watch does not wear well it probably has more to do with the lugs than anything else.

You do not need to look further than these pages for more examples of great square watches that also wear well. The Nomos Glashütte Tetra offers brutal minimalism. The Cartier Santos presents classical elegance. The Hermès Carré H, shown at the start, exudes an air of contemporary charm through sleek lines and refined geometry. 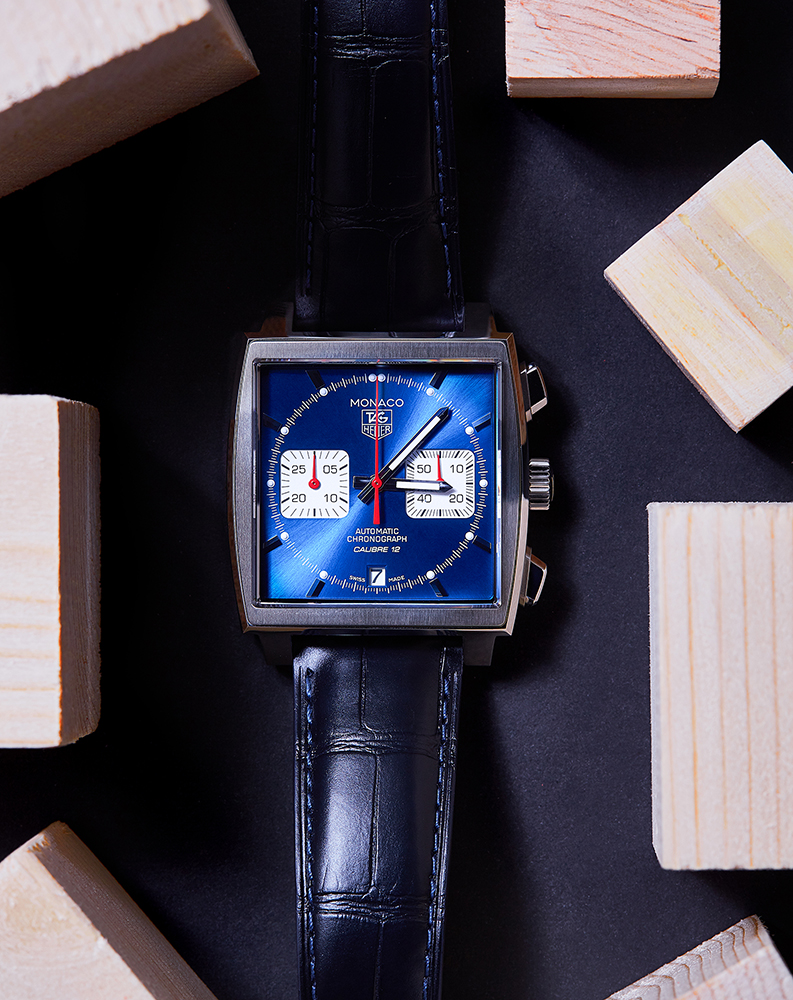 Other square watches can be the direct opposite of the above. Bell & Ross marks the perfect specimen for discussion. Their BR 01 watches are definitively sportive and instrument-like. That is because they were designed after cockpit instruments in order to enable utmost legibility and reliability. From humble beginnings in 2005, the collection has expanded to provide different indications, functions and complications. Originally 46 mm in size, smaller versions followed naturally with the BR 03 in a 42mm size and the BR S in a 39 mm size. Bell & Ross also managed to get a dive watch into the mix, with the BR 03-92; achieving good water-resistance is difficult for most form watches.

Moving on to the tried-and-tested, a collection enjoying unmatched popularity (for a square watch, that is) is the TAG Heuer Monaco, which celebrated its 50th anniversary last year. The watch is easy to like because it is moderate in design and presentation, neither as dressy as the Santos nor as weekendish as the BR varieties. Therefore, the Monaco appears more versatile for most people. A boxed sapphire crystal and contrasting subdials add to the vintage charm of the watch.

Having come this far, it must also be reiterated that there are not so many square watches out there — it is not only a phenomenon affecting German watches. The genre is very small, even when compared against other shaped watches, with a notable exception being the triangular Hamilton Ventura. WOW is not proposing that everyone should build a collection of square watches. Round watches are considered the norm, and this will never change. The writers are merely saying that it cannot hurt to have one square watch in the mix, or a rectangular watch, or a tonneau watch for that matter – anything non-round that suits you. Give one of these shaped watches a try and you may discover a new joy in your collecting pursuit. 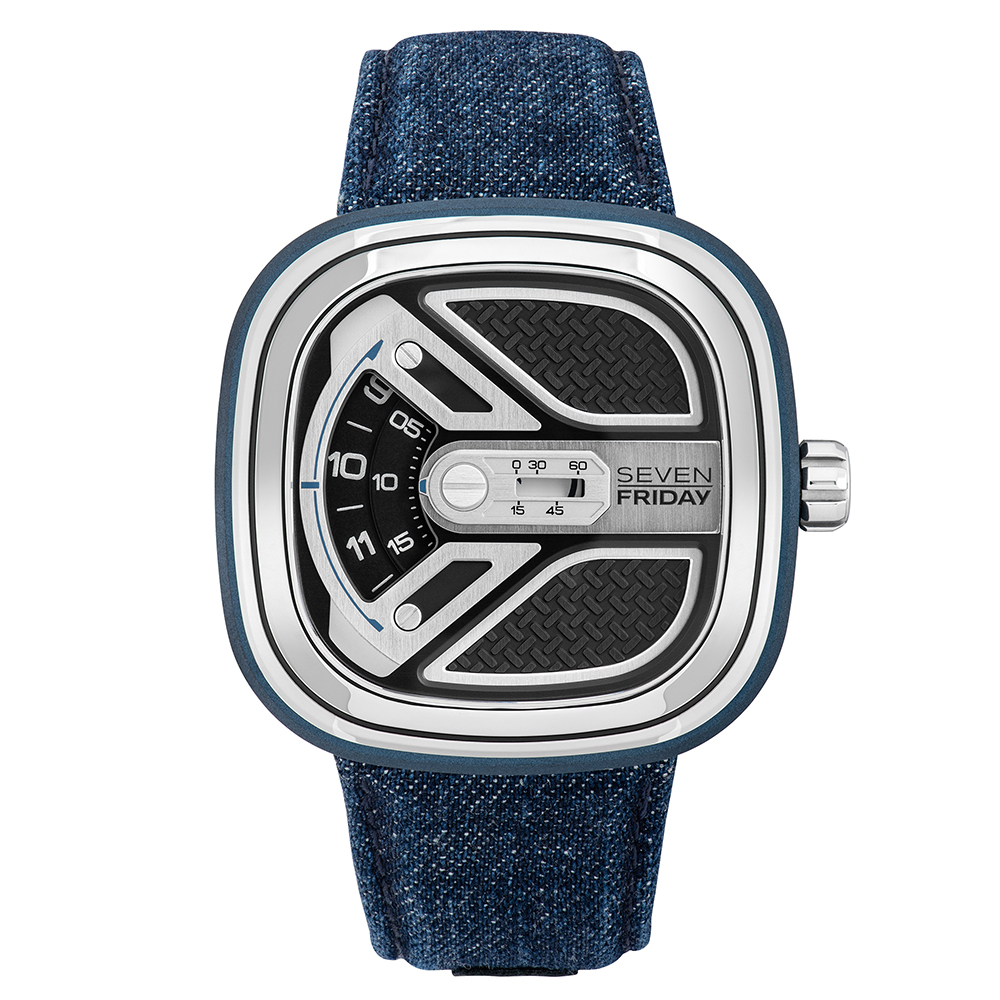 Not sure where to start? Prefer not to spend a significant amount of money? Well, one cannot go wrong with a Sevenfriday. This brand’s square watches with rounded corners come in many styles, colours and levels of industrial interpretation. Particularly nice is the M-Series for the hands-free time display where the hour and the minute are indicated by way of two rotating discs. Shown here, the M1B/01 Urban Explorer is worn on a denim strap that matches the dark blue PVD treatment of the case – an additional reason to diversify!