Time, a Hermès object at Hermès Takashimaya from 27 October to 5 November

As a subset of watch media, we often pontificate on how the mechanical watch is more art than functionality and yet often marketing collaterals from various brands still define a transcendent genre in terms of chronometry and precision. Every now and again, a watchmaker like Montre Hermes reminds us that however anachronistic a mechanical watch, the raison d’etre of modern time telling isn’t in its precision but in the romance of its artistry and the ingenuity of its display. To wit, Time, as a Hermès object and by extension, the display of physical embodiments of their watchmaking philosophy invite us to discover time as a vast playground and a veritable experience.

Time, a Hermès object at Hermès Takashimaya from 27 October to 5 November

10 years ago, Hermes gave us the Cape Cod Grandes Heures Automatic which opened our eyes to how we perceive time intangibly and at times imprecisely as described in the adages, “time flies when you’re having fun” and “a watched pot never boils” with a complication which at chosen intervals would speed up or slow down the angular velocity of hour and minute hands- in other words represent time’s flight or crawl depending on the hour. Today Montre Hermes measures the fun of time perception through newer objects of whimsy like the Slim d’Hermes L’heure Impatiente and the majesty of artistry with watches like the Slim d’Hermes Grrrrr!, in essence, Hermes has liberated us (even if at least momentarily) from time’s deleterious effects – to wit, to gaze upon their novelties at Time, a Hermès object exhibition at Hermès Takashimaya is to find time suspended.. so to speak.

Time, a Hermès object at Hermès Takashimaya from 27 October to 5 November 2017

For Hermes, time is an object born of uncompromising expertise. Its inherent tension is translated by the house into a singular characteristic. Rather than measuring, ordering, and seeking to control it, Hermes dares to explore another time, designed to arouse emotions, open up interludes and create spaces for spontaneity.

All is revealed to friends of the brand and industry media on 26 October 2017 where a show by Gandini Juggling has been specially choreographed to explore the physicality of this watchmaking philosophy beyond the exemplar of a few key timepieces shown at Time, a Hermès object ; Gandini Juggling’s cast of peculiar characters will mix with guests with apples pirouetting in hands with a ballet of fluid and precise gestures: a poetic dance allegorical to the question of time and gravity for the questions – will there be an Apple missed as the pace of the game accelerates? Does the display feel like an hour’s worth of entertainment or less? A demonstration of how time has slipped away, at the whim of the artists and apples shaping the space.

A disconcerting scenography continues the day after for public display from 7 October to 5 November at Hermès Takashimaya; First, with monolithic windows in which the watches appear and disappear in time with pulsating light. Then come interactive screens, human sized to better appropriate the forms. Before these two-way mirrors, silhouettes of the visitors are displayed before slowly vanishing into smoke. Videos and images succeed each other, stretched, duplicated in the manner of a kaleidoscope. It is for us, in front of the screen, to decide what to do with this time, this playful ally that belongs to us, always.

Exhibition details for Time, a Hermes Object at Hermès Takashimaya

Gandini Juggling choreography interpreting Montre Hermes’ watchmaking philosophy revealed to selected guests on 26 October 2017 at Hermes Takashimaya. The show is followed by a scenography circuit open to the public from 27 October to 5 November. 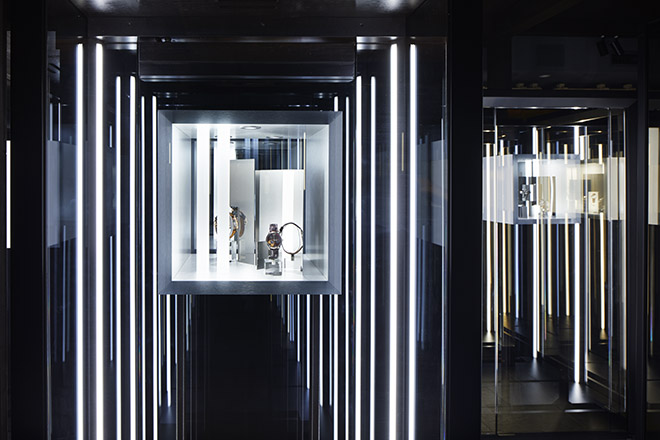 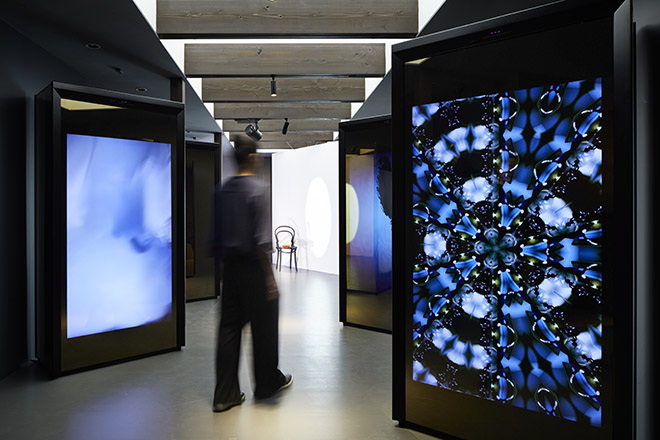 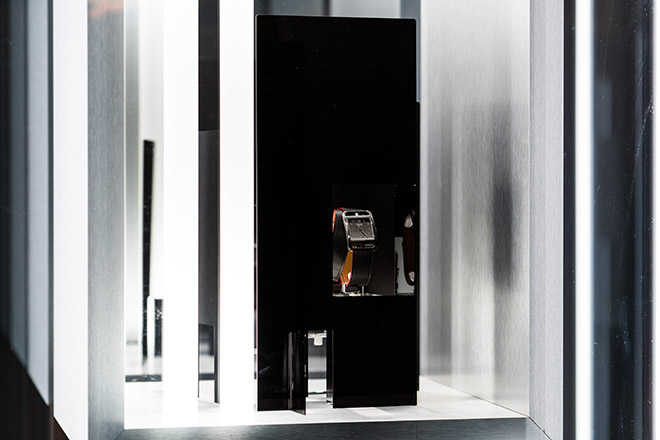