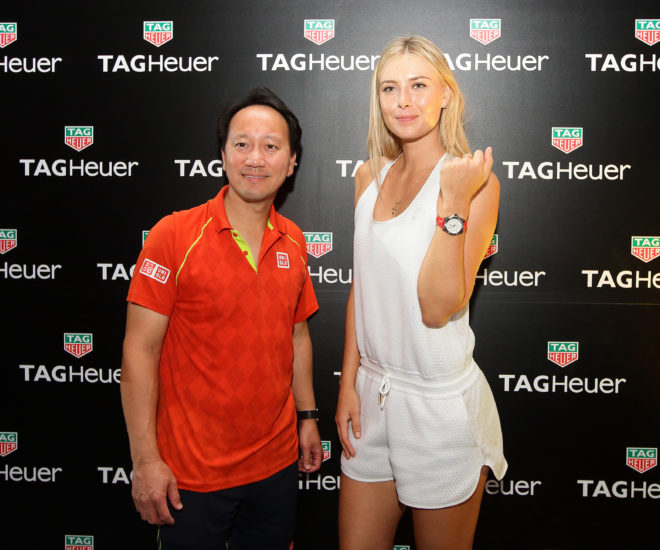 Swiss watchmaker TAG Heuer put on a show of its “Don’t crack under pressure” values with tennis superstar Maria Sharapova and Singapore’s first floating tennis platform. The Luxuo team gathered at Clifford Pier to witness the spectacle and we were not disappointed. Sharapova is of course a TAG Heuer ambassador and, from her arrival via boat to an exhibition match with tennis great Michael Chang and an entertaining stunt with speed painting artist Michael Raivard, she gave her fans a night to remember. Sharapova also played a part in the evening’s more serious business, a charity drive for the Make-a-Wish Foundation. In a game of mixed doubles – with Sharapova and Chang paired with local tennis players Angeline Devi Devanthiran, 19, and Shaheed Alam, 17 – TAG Heuer pledged a hefty $100 per rally so the stakes were high. The massive 181-rally certainly delivered for both the charity and the audience, resulting in a $18,100 cheque for the Foundation. “History is written in moments of adversity and in the superhuman will to overcome. That will exists not just in sport, but in everyday life, especially in the boys and girls of the Make-A-Wish Foundation who remain strong in the face of illness,” said Luc Decroix, Vice President of Global Sales, TAG Heuer. The evening also had a genuine tugs-on-hearstrings moment as 8-year-old Joshua Ong, who suffers from non-Hodgkin lymphoma, took to the court to present Sharapova with the new TAG Heuer Limited Edition SG50 Aquaracer; his wish was to meet a sports superstar and his wish certainly came true…