A painting by artist Francis Bacon sold for $142,405,000 on Tuesday, breaking the record as the most expensive piece of art ever auctioned. 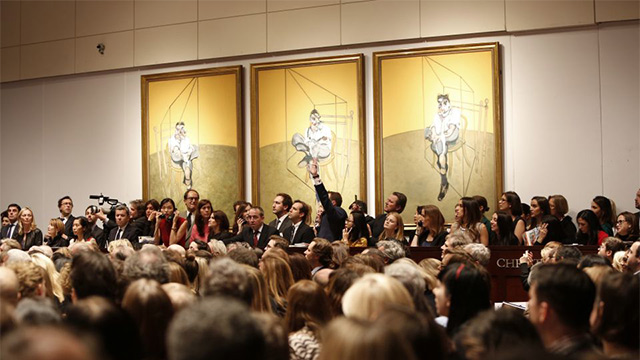 A triptych by British painter Francis Bacon — “Three Studies of Lucian Freud” — sold for $142.4 million on Tuesday, smashing the world record for the most expensive piece of art auctioned.

The work by the 20th century figurative artist, who lived from 1909 to 1992, had never before been put under the hammer until Christie’s flagship evening sale. It was bought by a New York gallery.

The most expensive artwork ever was a Cezanne that sold for $259 million in 2011. But that was a private sale, not an auction.

Hammered to an outburst of applause, the Bacon surpassed the previous record of $119.9 million fetched by Edvard Munch’s iconic “The Scream” by rival house Sotheby’s in New York in May 2012.

The triptych, the only one not in a museum to date and executed almost 25 years after Bacon and Freud met, is the most expensive single lot offered in the New York November auction season.

Officials said it was particularly special because Freud, a close friend of Bacon, went on to become a hugely important artist himself in later years.