Despite the China market blues, a rare blue diamond and a painting by Chinese master Zhang Daqian broke auction records at Sotheby’s April 5. 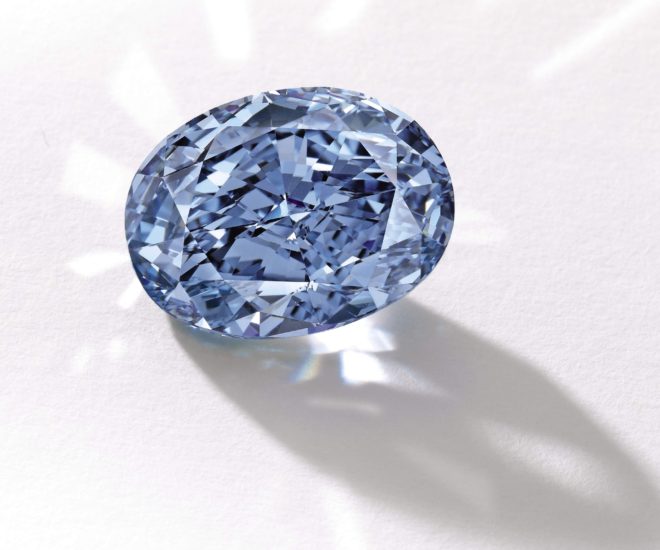 The 10.10 carat vivid blue diamond broke the record for the most expensive piece of jewelry sold at auction in Asia, but at the lower end of estimates which predicted it would fetch between $30 and $35 million.

Slightly larger than an almond, it is described by Sotheby’s as the largest oval blue diamond ever to appear at auction and “internally flawless”. It was sold to an anonymous phone bidder.

“The fact that it’s a record price for jewelry in Asia I think speaks well about the Asian market… I think it’s alive and well and very healthy,” Bennett said.

The sale came hours after a scroll painting by Chinese master Zhang Daqian sold for a record-breaking HK$270.68 million ($35.93 million), also at Sotheby’s.

It was snapped up by Chinese collector Liu Yiqian’s Shanghai museum — the latest in a string of massive buys associated with the former taxi driver turned tycoon.

Zhang’s splashed ink and color scroll outstripped the top-end pre-sale estimate of HK$65 million, breaking the record for the artist’s work at auction.

The sales comes despite a slowdown in the Chinese economy which expanded 6.9 percent in 2015, the worst performance in a quarter of a century and a far cry from years of double-digit increases.

There are fears that the combination of the Chinese economic slowdown and an anti-corruption drive by President Xi Jinping could hit the Asia market — both Sotheby’s and Christie’s posted lower totals at their autumn sales last year in Hong Kong compared with the two preceding years.

Liu, who has been making record-setting purchases at auctions in the past few years, stunned the art world when he bought a famed nude by Italian artist Amedeo Modigliani costing more than $170 million in November.

He set a record for Chinese porcelain in 2014 by paying over $36 million for a tiny Ming Dynasty cup depicting a rooster and hen tending to their chicks, know as the “chicken cup”.

Liu made world headlines by drinking from the cup after he bought it.

Auctioneers say despite China’s economic downturn, there is still demand for top quality collectibles, and demand stretches across Asia.

The “Seal of the Mandate of Heaven” which belonged to the Kangxi Emperor, the longest reigning Chinese monarch, is to be auctioned on Wednesday at Sotheby’s as part of its spring sales season, with a starting at a price of HK$50 million.