From the streets to museums, this post-graffiti artist from the Bronx, New York is bridging the gap between the underground and the mainstream. 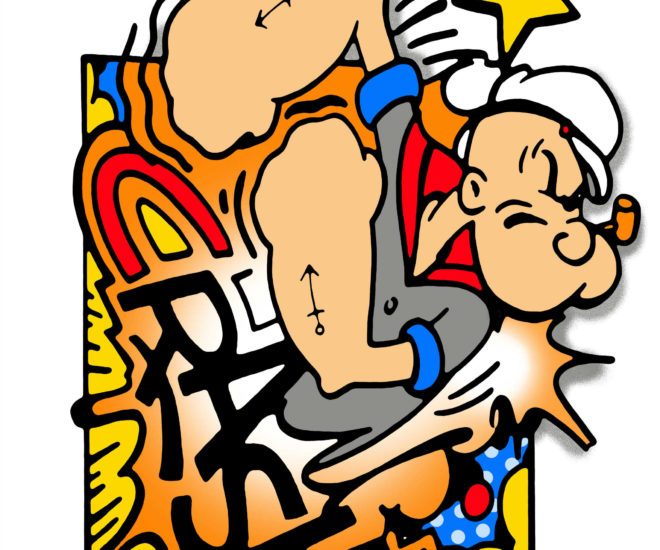 Born John Matos in 1961, Crash was raised in the Bronx, New York. He was one of the first of the 1970’s subway ‘writers’ to transition to canvas. At the age of 13, he began following the older teens from his neighbourhood to the train yards and began bombing. Taking the name ‘CRASH’ after he accidentally crashed the computer in his school, his name began appearing on trains circulating all throughout New York City. By 1980, he began transitioning from train yards to galleries.

In 1980, Crash was signed by Sidney Janis, one of the first gallerists to promote ‘post-graffiti’ artists. That year he also curated Graffiti Art Success for America at Fashion MODA in the South Bronx, launching the graffiti movement that has a worldwide art movement today. This ground-breaking exhibition is viewed as a launching point in legitimising the graffiti movement, connecting street artists with the downtown fine arts world. In 1983, he headlined an exhibition called ‘Post-Graffiti’ with Keith Haring and Jean-Michel Basquiat at Sidney Janis. His works are now included in the collections of Museum of Modern Art, the Brooklyn Museum of Art and others.

Crash creates all his work freehand, primarily using spray paint. Bright and vibrant and always tightly cropped, his work explores the nexus between Pop and Graffiti, visual and written language. In the true essence of pop art, Eric Clapton uses a custom Stratocaster through his 2001 tour and later appeared with another. In total, Crash has created five guitars for Clapton, though only three of them have made public appearances. One of Clapton’s ‘Crashocasters’ (nicknamed by Eric’s former guitar tech, Lee Dickson) auctioned for US$321,100 by the name of ‘Crash-3’ and was used extensively during the first Crossroads Guitar Festival in 2004.

In 2014, Crash started his gallery named WALLWORKS, as a visual link between the ‘underground’ and the ‘aboveground’. His role as an artist as well as a curator in linking the street to galleries and museums is a huge key for the success of this movement today. Our friends at Art Republik speak with Crash in an exclusive interview. The author is himself an important artist in Singapore, as seen here. Crash with the author, Jahan Loh

How did you get started in graffiti?

I got started in Graff, like most others my age, by emulating others. I grew up in the Betances Housing projects in the South Bronx and some of the older guys were very active in the Graff movement back then, in around 1973 or 1974. I started in around 1974 but never got to the trains until about 1975 or 1976.

You have taken your practice a long way from your first pieces. Can you please share about the evolution of your practice?

The evolution was slow initially but once I got a studio, things started to shift. The simple act of staying long hours and figuring things out in your mind and on canvas and paper was the best thing. What is the main challenge you face when beginning a painting?

Right now, the main challenge for me is to constantly keep the dialogue going and keep it moving.

When the painting is finished, it is finished. When my mind’s eye knows that is it done, I stop. There are no rules, you just know.

How has painting influenced your life?

Painting hasn’t influenced my life, IT IS MY LIFE.

The best part of my career is the quiet time that I spend working. I like the isolation that it brings; you can think things through, well, most of the time. Back to Metal by Crash A mural by Crash