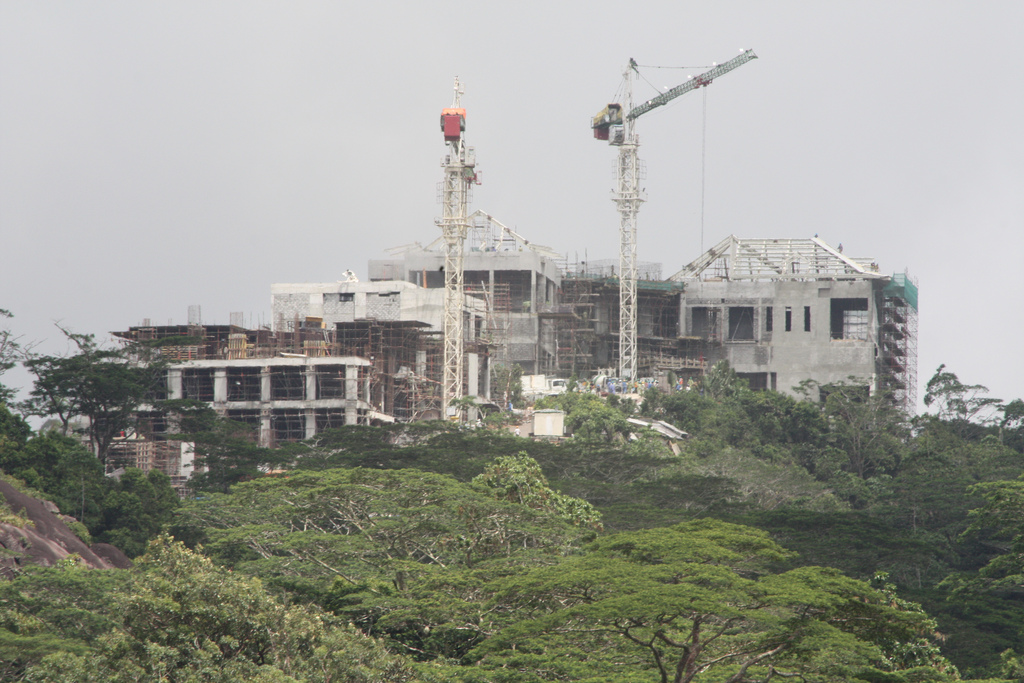 A village in the Seychelles called La Misere is demanding millions in damages for pollution caused by the construction of a huge palace for the United Arab Emirates president, residents said Thursday.

Sheikh Khalifa bin Zayed bin Sultan al-Nahyan, also the prince of Abu Dhabi, is building a lavish compound on the highest spot of the Indian Ocean nation’s main island, on the site of a former US tracking station.

Now 350 households are filing for compensation because the United Arab Emirates president’s hundreds of workers have polluted the village’s water system and river with human excrement.

“La Misere was the place with the best clean drinkable water on the island. Now we have diesel and human waste to drink,” said one long-time resident, speaking to AFP on condition of anonymity.

The board of La Misere residents also said that farming was no longer sustainable and complained of noise as around 100 trucks toil up and down the mountain with building material.

Most of the homes in La Misere have demanded 650,000 Seychellois rupees (55,000 dollars) in damages from the government, which opposition newspapers allege sold the site to the Abu Dhabi prince for a symbolic rupee.

According to Forbes, Sheikh Khalifa is the world’s third richest royal and has a fortune amounting to around 19 billion dollars and the world’s tallest building named after him. “Our property value is next to nothing now, as no one wants to be up here. Maybe that was Sheikh Khalifa’s plan: to get everyone out of La Misere,” said one angry resident.

The local community is charging that the Emirati prince brought his own construction company, workers and material in huge jumbo planes and has contributed nothing to the island’s economy.

Sheikh Khalifa’s six-storey palace complex will have a 360 degree view of Mahe, the main island of the Indian Ocean archipelago, a paradise destination where a growing number of wealthy foreigners are buying large swathes of land.

Resentment is growing towards Sheikh Khalifa, who is also building a marina on the island, and other Gulf billionaires taking up huge stakes on the island.

“In my view, James Michel is selling out Seychelles‘ interests to key Arab friends he has established since becoming president…, because his economic policies have failed and consequently his political position is threatened,” Seychellois columnist Christopher Gill told AFP.

Gill condemned the absence of legal tender procedures and what he termed “the wholesaling of our national heritage, which is resulting in the displacement of the Seychellois people from their land.”

“He is treating the state’s assets as his personal assets,” said Gill, who plans to create a nationalist party, charging that preferential treatments mean that little in the way of taxes and revenue is generated for the country. Saudi Arabia’s Prince Walid bin Talal bin Abdel Aziz al Saud also has stakes in the Raffles hotel being built on the island of Praslin and has erected a Four Seasons hotel (pictured above) in the south of Mahe.

The Seychelles government has acknowledged shortcomings in the way the construction was supervised but blamed the contractor for the water pollution and environmental degradation.

It had not responded directly to questions over the sale of the land, but stressed that the UAE had granted 30 million dollars to the Seychelles in 2009 and was upgrading Victoria hospital.

The government also said that the Seychelles and the UAE have agreed to the establishment of an Emirati diplomatic mission on the archipelago, which has a population of 85,000.