An intellectual behemoth, he has hobnobbed with Heads of State and Foreign Dignitaries with panache, wit and importantly, classic style. As a result, Lee is recognised by many (including Henry Kissinger) to be an enlightened statesman. 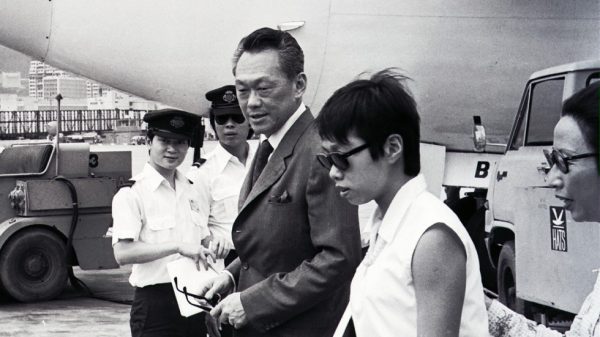 Mr Lee Kuan Yew, rocking a 3 button suit jacket but expertly buttoning only the second one, accessorised with pocket square during a visit to Hong Kong.

Perhaps it is poignant that on this, Singapore’s 52nd national day or more accurately, our independence day celebrating our departure from the Malaysian Federated states that we remember the many times the late Mr Lee Kuan Yew showed the world how to look dapper in a well-tailored suit, as he was laying the groundwork for our small nation state to punch above its own weight. An intellectual behemoth, he has hobnobbed with Heads of State and Foreign Dignitaries with panache, style and wit, as a result, Lee is recognised by many (including Henry Kissinger) to be an enlightened statesman. 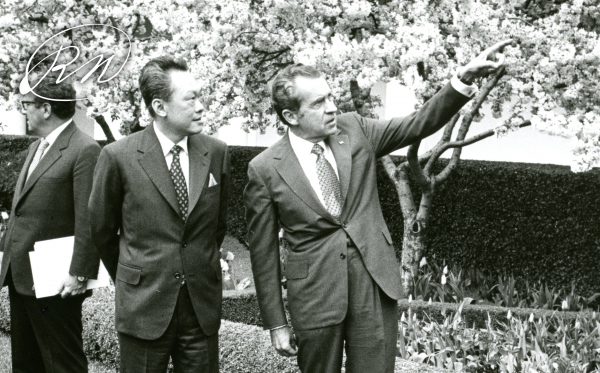 From the Richard Nixon archives, Mr Lee Kuan Yew in a suit. Notice how it is not “boxy” like most other modern politicians? Again, note the pocket square, puff fold no less.

That said, some aspects of Singapore’s history might have been injected with some hyperbole — chiefly that the country was a fishing village when we gained independence, there is little contention that Singapore with its incredible wealth (in part thanks to Dutch economist – Albert Winsemius and Singapore’s long-time economic advisor from 1961 to 1984 who spearheaded the formulation of Singapore’s national economic development strategy including our public housing policy and our attractiveness to multinational corporations) has grown from 581.5 km² in the 1960s to 723.2 km² today by reclaiming land with earth obtained from its own hills and neighbouring countries. The other point not in question, was how the Cambridge educated lawyer was impeccably dressed through his life as a strapping young man; naturally, this effortless classic style for a political leader who had to joust on the international stage to get Singapore her just dues and serve as her voice in a heavily anglicised and Westernised world succeeded in getting this little red dot recognised as a state favourable to conglomerate investment and not just some “Chinaman’s backwater banana republic”.

Left: Lee, aged 5, dapper as heck already (look at his pocket square game). Right: Lee with the Mrs. to be in Cambridge. Perfectly layered with wool vest and wide lapel blazer. (incidentally, the original photo which made this author realise just how stylish he was)

As a personal philosophy, Mr Lee Kuan Yew embraced a spartan lifestyle of simplicity during his political life. His tenure as Singapore’s first Prime Minister also meant that he had to embody the kind of clean living he espoused and held his cabinet members to. His idea was that as Templars of Singapore’s nationhood and identity, he (and his parliamentarians) had to serve as a beacon and exemplar for Singaporeans to follow.

While he might be amused at appearing within these pages of a luxury lifestyle publication, there’s no doubt as to whether Mr Lee believed in quality beyond reproach – in other words, the essence of luxury (before it became over-blown and over-hyped). Thus, we explore the very accoutrements and trappings which supported the country’s first Prime Minister in his quest to put Singapore on the global map. 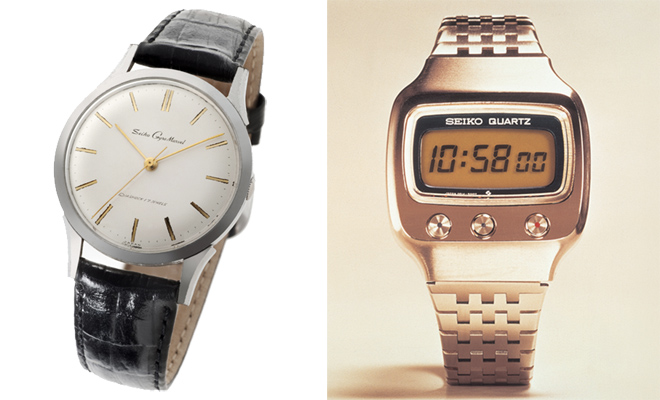 “Young men and women who joined Singapore Time (Pte.) Ltd. must show that they could achieve this international level of competence. The Singapore worker must prove that he was as good as Seiko workers in Japan” – Mr. Lee Kuan Yew on the importance of Seiko in Singapore

Most might not recognise Seiko watches as a luxury. Heck, most might not even know that the humble Seiko 5 watch is of completely in-house origin from its movement parts to case to the bracelet. Back in 1976, Mr Lee had invited Seiko’s the Managing Director Ichio Hattori to establish Singapore Time Pte. a factory to make wrist watches on Marsiling drive in Woodlands new town – an example of Singapore’s social and economic development – 90 workers were trained in Daini-Sekiosha in Japan while the remaining Singaporean workforce trained under the returning specialists, among the specialists was Kok Kham Seng, the Division Manager for Seiko Total Quality Management department:

This was Seiko’s first factory outside of Japan and it was also equipped with the latest technology of the period – Singapore Time (eventually Seiko Instruments) was going to be a fully integrated factory from materials to finished products.

Underscoring the importance of Japanese enterprises in Singapore, a Ministry Press Release states that in 2006, some 1,600 Japanese companies located in Singapore invested between S$1.2 billion and S$1.8 billion annually in Fixed Asset Investment in the last 8 years making  Japan one of the top 3 foreign investors in Singapore.

“When I was about to complete my National Service, I saw a notice posted inside the camp advertising an apprenticeship with Seiko. They wanted to start a company here and needed technicians. Seiko was a big name at the time (1970s) and so I was interested.” – Kok Kham Seng, Seiko Total Quality Management Division Manager

Thus, the historic relationship has brought to attention some of Mr Lee’s watches including an 18K gold Seiko Pocket watch given to him by Hattori to commemorate the opening of the Seiko plant (the watch eventually sold at Sotheby’s Auction for S$65,000) including a pair of Seiko watches with the inscription “In memory of Ichrio Hattori, 26 May 1987” for him and his wife.

Gifted to him on 11 April 1953 by members of the Singapore Union of Postal and Telecommunications Workers, Mr. Lee Kuan Yew’s 1953 Rolex Oyster Perpetual is probably going to be one of the most anticipated watch auctions (given its provenance) should the National Museum ever consider (likely never) putting it up for auction. It was a gift celebrating Lee’s victory where he successfully represented the union during a wage dispute. Over 1000 clerks received 28 months’ back pay and they all contributed to the purchase of the watch.

1953 almost marked the year that Rolex’s professional collection was born – the Rolex Oyster Professional marked the enduring and robust watches which Rolex eventually came to be known for — the Explorer and the Submariner. The Explorer would go on to be associated with Sir Edmund Hillary and Tenzing Norgay’s ascent of Everest while the first Submariner would the world’s first timepiece resistant to 100 meters — many consider the vintage Submariner to be an evolution of the original Rolex Oyster Perpetual.

According to Straits Times, Mr Lee Kuan Yew had his work shirts tailored at Singapore’s own family-run tailoring business CYC The Custom Shop. According to Ms Fong Loo Fern, the 61-year-old daughter and managing director of the haberdasher, Mrs Lee always came in and made the orders for Mr Lee as he got busier with running the country:

“Mr Lee ordered shirts from us, and we also had pyjamas made for him. His name was usually embroidered on them in full. In the past, he was served by my father who was in charge of sales at the time in the 1960s. I remember my dad was very impressed with him, saying that Lee Kuan Yew was his hero.” – Fong Loo Fern, Managing Director, CYC The Custom Shop

CYC dressed Mr Lee since the first National Day Rally in 1965 and during a 2001 CYC exhibition, Singapore’s first Prime Minister was happy to loan three shirts for the show, among them, that very first shirt tailored by CYC – Lee had been a customer for more than 50 years. CYC is Singapore’s oldest tailor and custom shirt maker. 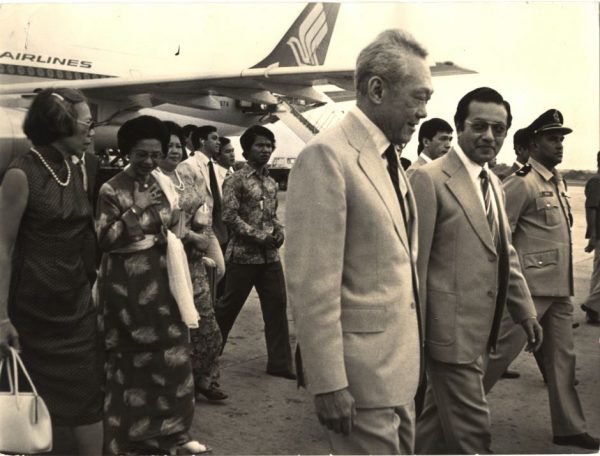 Mr Lee with then Prime Minister of Malaysia Mahathir Mohamad