Fine cognac and Baccarat crystal make an excellent match in a new limited edition by the iconic imprint from Remy Martin. 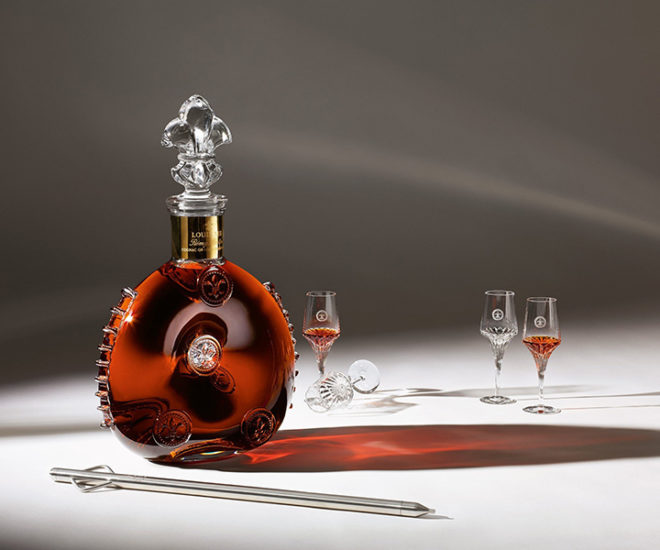 Joining forces with crystal maker Baccarat, cognac house Remy Martin presents the world with a unique blend of brandy, the Louis XIII Le Mathusalem. The six-liter cognac, which is brandy from the Cognac region in France, is presented in a crystal carafe by Baccarat that is known as a Mathusalem.

Crafting the specially designed carafe is no easy feat, considering that it takes more than 20 master craftspeople from Baccarat to create it. An old metal flask dug up from a battlefield in 1850 inspired the design and shape of the decanter, while the brand retained Remy Martin’s iconic Fleur-de-lis medallions. Each of the decanters are mouth-blown and numbered while the neck of the bottle is adorned with 24k gold.

The cognac in each crystal carafe has been produced by blending 1,200 eaux de vie that are aged in Remy Martin’s cellars. While some of the cognacs sit in oak barrels for at least 40 years, a select few are even aged for a hundred years. The eaux de vie are made using wine grapes from the Grande Champagne area in the Cognac region; this is the most obvious distinction separating Louis XIII from other cognacs because it is 100% Grande Champagne.

Each limited edition decanter will be accompanied by a pipette that was designed exclusively for the Louis XIII Le Mathusalem. The pipettes are used by the cellar masters to extract and taste each eaux de vie from the barrels. Fans of the cognac can expect the first release to be launched sometime between September to October. Come November, the Louis XIII Le Mathusalem will be available at Harrods, the London department store.