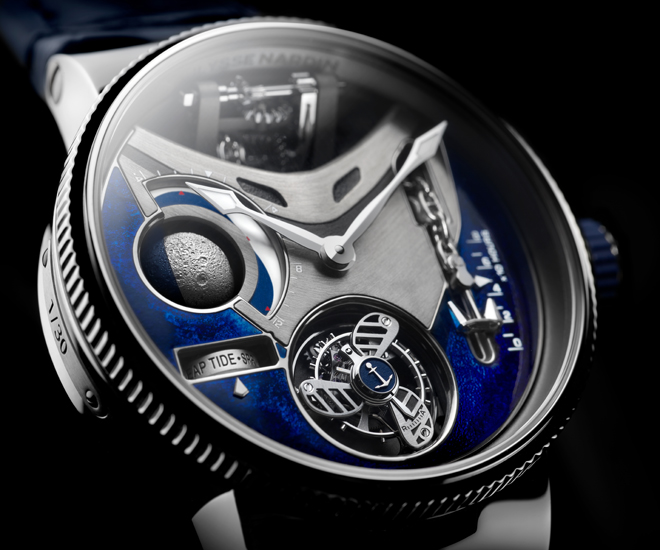 Flying tourbillon, 3D moon phase indicator, Indicator of tidal coefficients and volumes and patented, unique power reserve with anchor and windlass linked to the winding mechanism, the new Ulysse Nardin Marine Mega Yacht is the ultimate watch for yacht lovers, not so much for its “nautical performance specifications” but in the many special ways which connects yacht lovers to their catamarans and crafts.

With the Marine Mega Yacht, Ulysse Nardin reinforces its provenance in maritime timekeeping with a plethora of innovative watchmaking and nautically inspired mechanics which not only reinforce its watchmaking prowess by showcasing the technical versatility of the manufacture but also the successfully combining the visual aesthetics of mega yachts in a manner that is substantive and not just “dressing”. 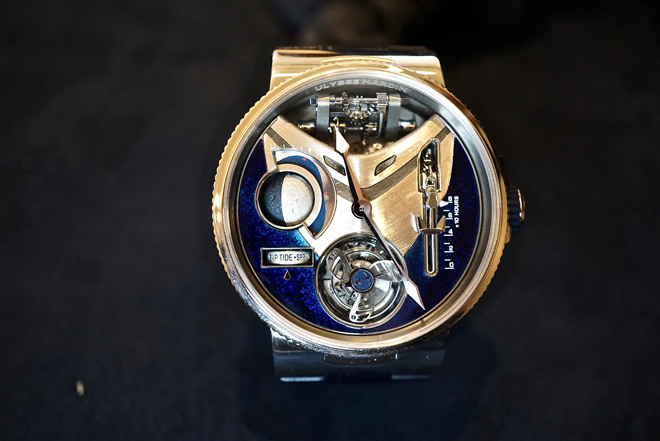 Due to its status as “store stock”, the Ulysse Nardin Marine Mega Yacht was shot with its protective cling film attached, hence, some artefacts present are the result of dust specks 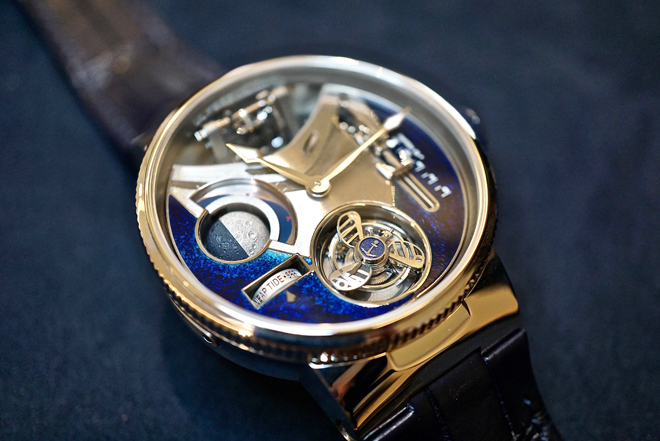 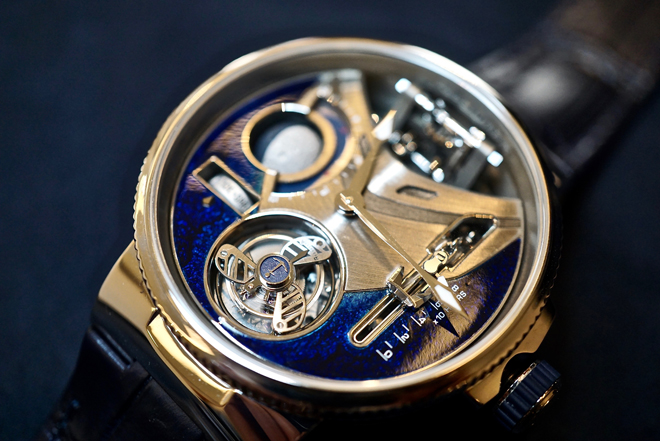 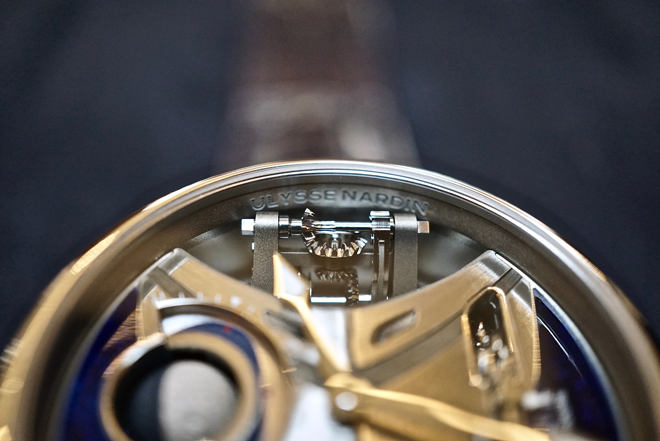 A close up view of the Marine Mega Yacht windlass 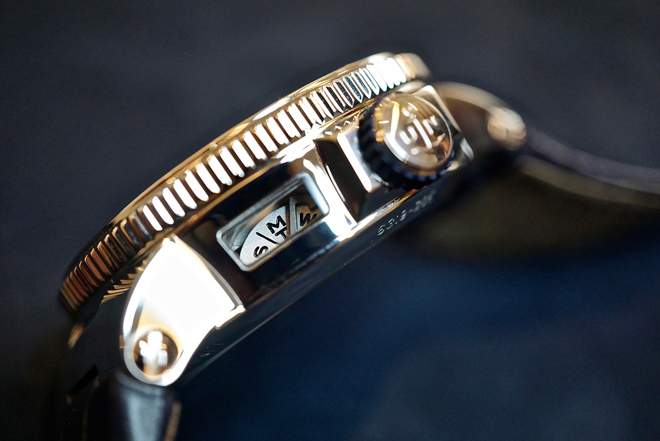 The window telegraph window opened in the side of the watch-band indicates its position (S: Set position for setting the hands/TM: Tide and Moon position/W: position for winding the movement). 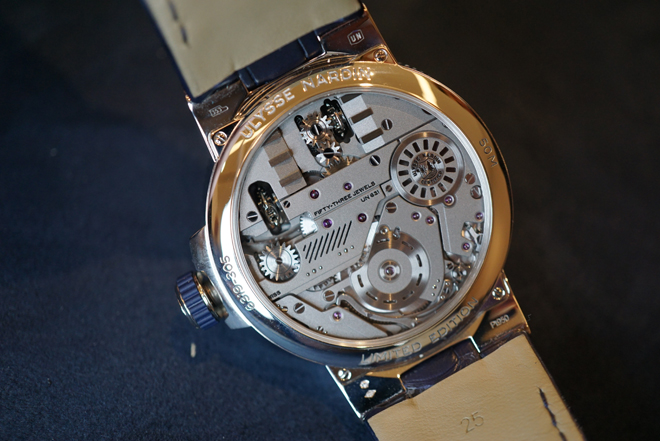 The “Engine Room” of the Marine Mega Yacht

In grand maritime tradition, the Manufacture builds upon the legacy of a previous “ship of the line”, 2016’s Marine Grand Deck Tourbillon. Packing new nautically inspired high complications,  the newly christened “Marine Mega Yacht”. Available in a limited edition production of 30 timepieces, the Ulysse Nardin Marine Mega Yacht is 44mm platinum behemoth  which is emblematic of the watchmaking heritage of a company which has made marine instruments of sailors since 1846. 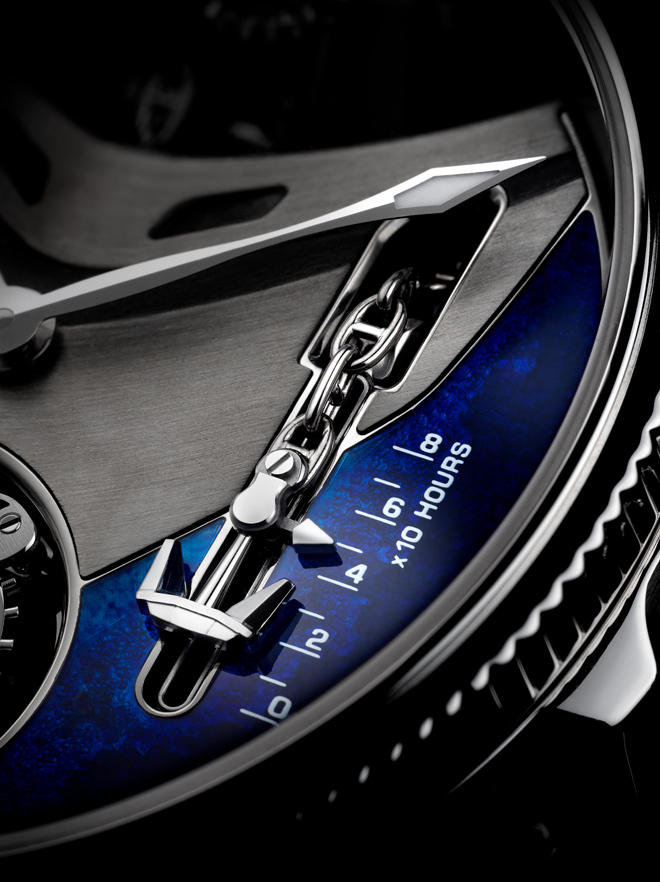 Grand Feu enamel plays up the brilliant blues of the ocean

A sea of cerulean is replicated by way of “grand feu” enamel and hand painted to mimic the thrashing waves replete with “foam”, enhancing the white gold “hull” of the vessel which appears to cut through the churning waters. The Ulysse Nardin Marine Mega Yacht is not just about merely replicating ocean-going aesthetics but also in executing horological innovations in an authentically novel, naval manner. 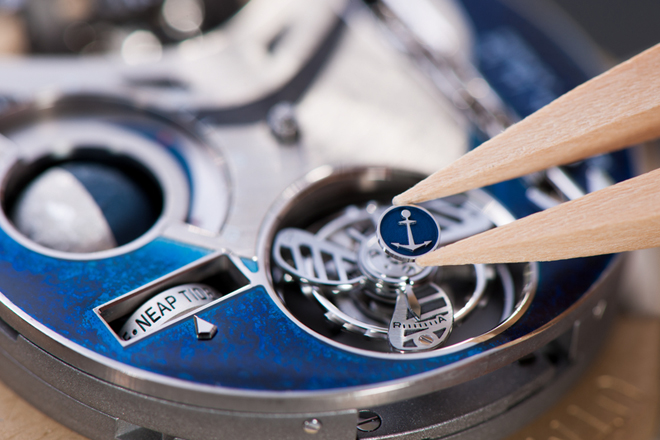 The flying tourbillon, a common expression of high horology, is decorated with a lightweight propeller blade which operates with chronometric precision but loses none of the visual dramatics thanks to its “skeleton” propeller blades. And then, we get to the coolest parts of the Ulysse Nardin Marine Mega Yacht – the 3D moon phase indicator, Indicator of tidal coefficients and unique power reserve indicator. 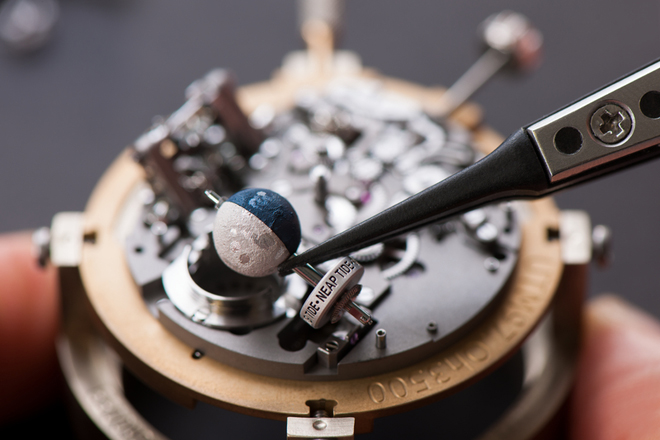 The spherical moon phase throws into scientific focus, the often neglected aspect of our extraterrestrial neighbour and her influence on our “spring tides or neap tides”, for those not nautically acquainted, our peaks and troughs of high and low tides. Ultra-precise engraving makes the three dimensional complication a literal representation of the moon, half coated with a blue PVD treatment, with the other half, silver coloured rhodium to communicate the different phases of the moon. 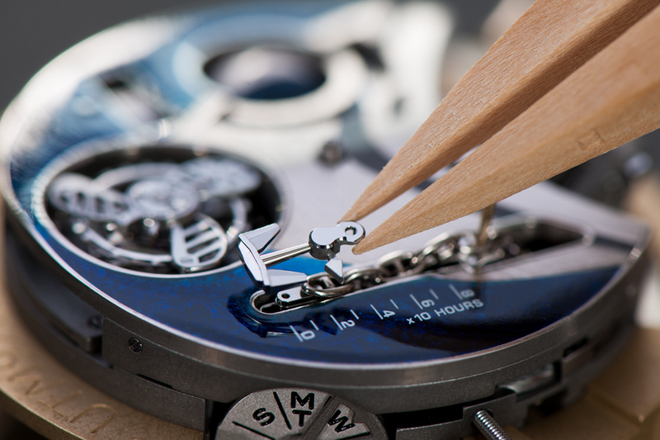 Even something as “perfunctory” as a power reserve indicator is given the nautical treatment. The anchor and chain features a contemporary design”plowshare” linked to the chain by an anchor ring, all responding to the winding of the crown as one charges the power reserve. Icing on cake, the manipulation of the crown as one winds up the mainspring of the Ulysse Nardin Marine Mega Yacht is visible through the perfectly replicated miniature windlass. 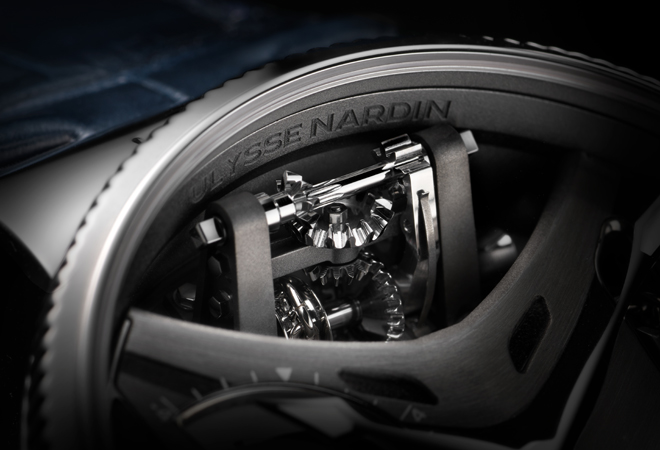 A windlass is a machine used on ships to let-out and heave-up equipment such as a ship’s anchor or a fishing trawl, here, the perpendicular wheel and pinion set up simulates the mechanism of an actual yacht windlass raising the power reserve’s anchor.

The Engine Room of the Mega Yacht 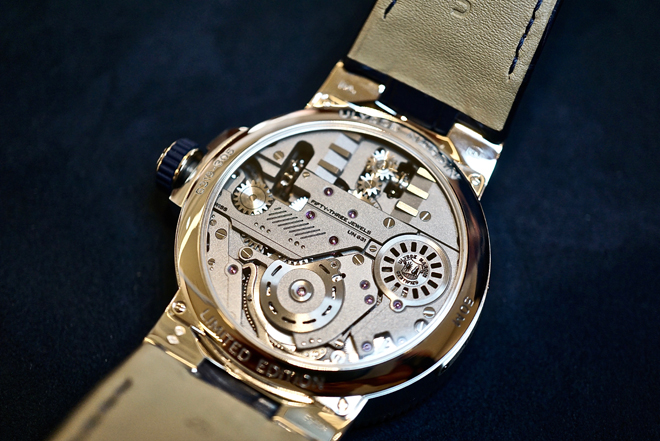 The 504 component engine room of the Mega Yacht is the in-house UN-631 calibre designed in collaboration with Christophe Claret.  In contrast to typical fine watchmaking calibres, the highly complex movement does not bear the usual high horology finnissage – the heart of the Ulysse Nardin Marine Mega Yacht is designed to look like the engine room of a literal yacht – eschewing traditional chamfered edges, cotes de geneve and your typically contrast polished bridges with mirror finished anlage and matt surfaces but instead, the UN-631 conveys the brand’s prowess through well thought out, detailed expressions in matte, grained finishing with strategically exposed sections showing off specially polished elements required for the optimal functioning of an engine or in this instance, the Marine Mega Yacht. 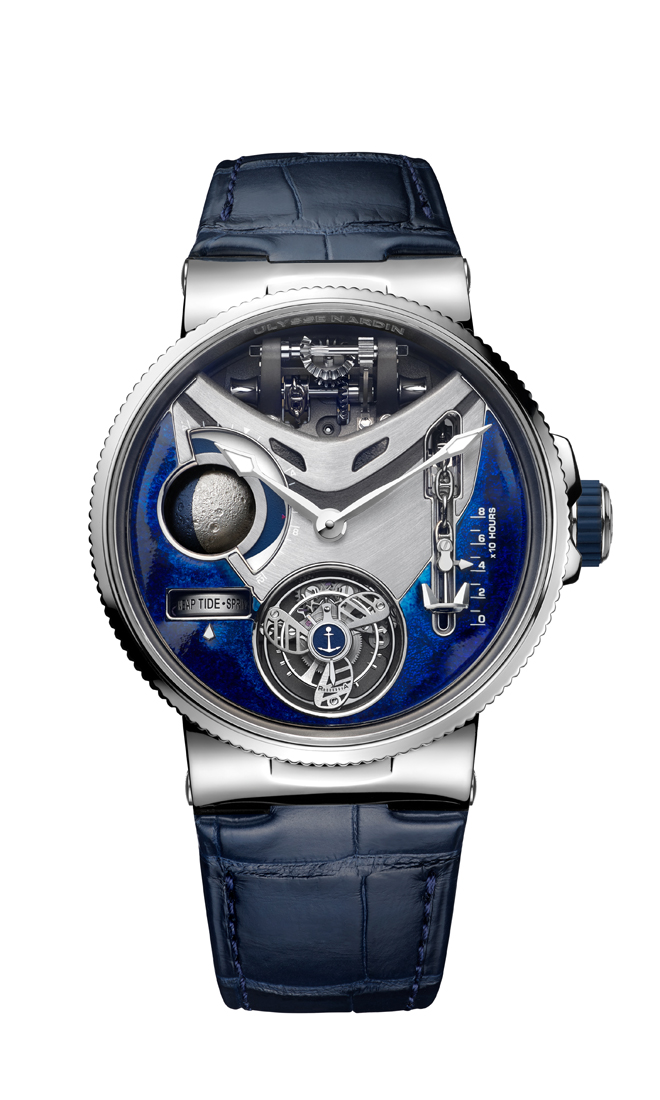 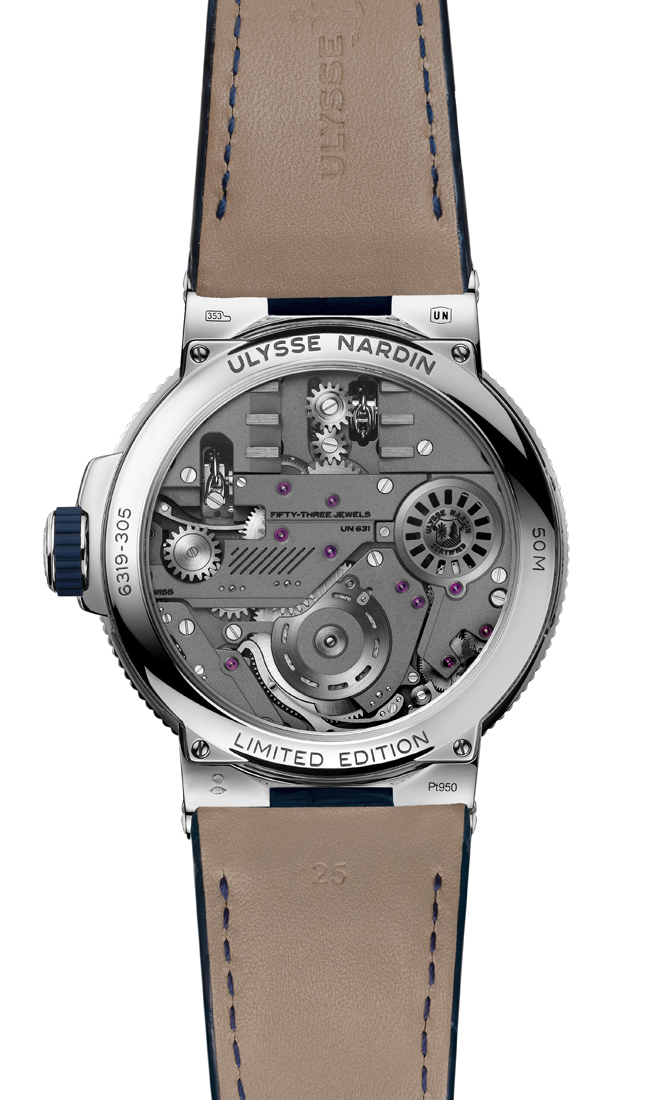