Israeli designer Kobi Levi turns his footwear fantasies into reality – grabbing the attention of A-listers on the way. 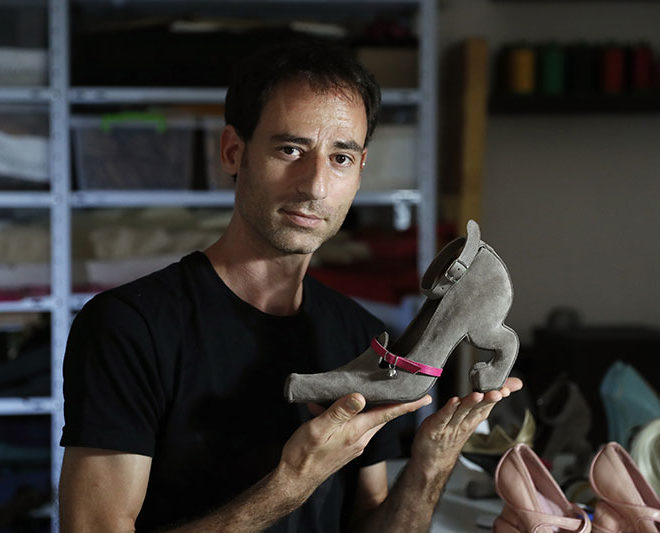 From the modest studio at his Tel Aviv apartment, Israeli designer Kobi Levi turns his footwear fantasies into reality – grabbing the attention of A-listers with his creations.

“My world is that of everyday glamour, the glamour that goes unnoticed, which I show in an extravagant and fun way,” the 41-year-old says. He creates with a vintage sewing machine and an old leather press, tackling subject matter that ranges from junk, to sex acts and stretching felines.

His big break came in 2011, with an e-mail from a fashion design studio with a notably famous client: Lady Gaga. “They wanted a pair of shoes for a video,” he says. “I was super surprised because at the time I had no studio, just a small blog with photos. I was making the shoes my size because nobody wore them and showing them to friends and then putting them in boxes,” The shoes debuted in Lady Gaga’s 2011 music video “Born This Way.”

But it didn’t stop there. Whoopi Goldberg spotted his black and white sneaker with an oddly realistic chewing gum heel, and  wore it during an episode of ‘The View’ (where Barack Obama guest-starred, no less). When asked about the inspiration, he mentioned the time he saw someone stepping in a chewing gum and “getting annoyed about it”. Fergie also sported the same pair in the music video for “M.I.L.F. $.”

Levi is acclaimed by fashion big-names such as Vogue Italia, who described him as “a genius, unusual, true creative talent, the captor of surrounding reality, of unpredictable objects, of animal appearances”. Stylist B. Akerlund (of Beyonce and Kim Kardashian) also showcased 13 of the Israeli designer’s shoes in his showroom.

Most of the orders for the designer came through his website, with prices ranging from $800 to $3,000. However, Levi’s designs are made to measure in very limited batches – as few as 20 pairs. They occupy, he says, the crossroads between “design, art and fashion.” – an appropriate description of shoes shaped like playground slides, a design with a miniature harp in the heel, and even a close-up of a sex act.

For tools, Levi makes do with a vintage sewing machine and an old leather press to take his designs from fantasy to reality. Given his modest workshop and simple tools, Levi’s fantastical imaginings can be difficult to realize, but when everything comes together, it becomes a manifestation of a creative madness. However, Levi made sure that his shoes are made to be worn, not just to act as a visual display.