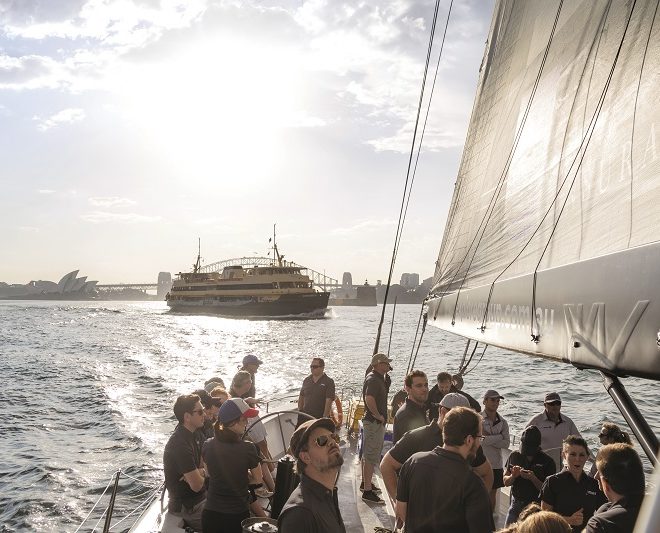 In an effort, I am sure, to distract me from the obvious fear permeating through my bones, our skipper draws my attention to the Prime Minister’s palatial waterfront residence in Kirribilli. This gothic revival in the heart of Sydney Harbour has housed Prime Minister’s since the 1930s. A joke is made by a crew member about the recent appointment of millionaire businessman Malcolm Turnball as the new head of the country and the very fact he will, unlike most of the Prime Minister’s before him, actually be economising if he moves into Kirribiili House which, while almost opposite his trophy family home in Point Piper is not only less luxurious but worth considerably less also. With fingers at the helm of this glorious racing yacht I am still terrified. And here we pass Nicole Kidman and Tom Cruise’s former home, another crew member points out, and the enviable properties of Westfield boss Frank Lowy, and designer Charlie Brown.

I am for a moment distracted, fingers loosen their grip on the vast steering wheel in front of me and the yacht quickly picks up speed and veers sharply to the left. Everyone is on their feet trying to balance. Panic, on my part, ensues as I try and steady the 70 foot racing yacht. And this is what happens, says my minder expertly levelling us out, when you take your eyes off the horizon. He still however won’t let me sit leisurely on the peripherals of the America’s Cup class yacht, Spirit, and I continue to apprehensively navigate through the harbor, very conscious of the efficient network of Sydney ferries in front and behind me racing to keep on schedule. It is only then I realise this is a lot louder than I thought it would be. I thought sailing was all about the silence of the sea? I keep turning my head to make sure I catch instructions down wind, heaven forbid I again lose control of the wheel and end up against Malcolm’s million-dollar jetty and on the nightly news. Lovingly dubbed a sporting nation, sailing has always been an icon of Australia’s summer sport calendar, particularly in the harbor city of Sydney

Watching the sail winched up is, I have to admit, extraordinary, and while I am staring hawk-like at the captain who quickly manoeuvres by me to repair a slight tear in the sail with tape, I am surprisingly calm and impressed at how stable he is not having to hold on to anything despite our constant moving. We finally reach a safe place to sail. I’m relocated to the arduous grinders to appreciate the feverish jump from one side of the yacht to the other at the command of “tack”, shouted by the captain, as the yacht increases its lift out of the water so we are effectively standing at a right angle, steadied by the force of the wind against the sail. For the first time I truly appreciate the silent beauty of sailing Sydney. Engines are switched off and we are at the will of the wind. Despite the ferries, random fishing boats and sole sailors all we hear are the waves crashing against the glory of this yacht and everyone is speechless.

We have glided under the Sydney Harbour Bridge and alongside the sail-inspired Opera House. We have hoisted sail outside Kirribilli, then along Shark Island, with a few tacks towards Manly, each water frontage suburb glistening under the sun. They are, without a doubt, worth every dollar. We reach a top speed of 13 knots with the top wind speed a comfortable 16kts to 18kts. Growing up in the harbor city I have always admired the ocean and its command over whoever braves its path. Having three times covered the start of the prestigious December 26, Rolex Sydney to Hobart yacht race, granted in a small media boat and once during one of the fiercest storms in the races’ history I prefer my feet firmly on terra firma. But after a couple of hours, Spirit reminded me of the beauty of sailing the sea, albeit with a very capable crew and on a leisurely weekday afternoon as opposed to a busy weekend in the harbor when the sailing traffic is definitely heavier. Built for AU15 million for the 1992 America’s Cup in San Diego, Spirit, or AUS21 was raced by Spirit of Australia. She placed 6th in the Louis Vuitton Cup and then returned to Australia. Following minor alterations the yacht was put into commercial survey and began operating as a corporate charter vessel. She underwent a full refit and mast replacement in early 2012 making her a very competitive rival to sister ship AUS40. Originally FRA40, AUS40 was built by the Challenge of the Antibes Yacht Club for the 1995 America’s Cup in San Diego. It wasn’t finished in time so did not race but was completed in 1998 and brought to New Zealand by the Swiss team FAST 2000 as a trial boat for the 2000 America’s Cup in Auckland. Sail NZ purchased the yacht following the 2000 Cup where it operated as NZL40 before being upgraded to NSW Maritime commercial survey standards and shipped to Sydney in November 2010.

Both yachts are part of the Sail Sydney fleet available for charter, team building, touring and night racing, and most importantly to introduce sailing enthusiasts at every level of expertise to what it is that makes the America’s Cup, the world’s oldest and most prestigious sporting trophy and ultimate yachting regatta, so spectacular. The four-man crew aboard Spirit during my sail has thousands of sailing experience between them. They have raced in some of the most fervent and dangerous races in the world and today are cool and calm, expertly moving through the amateur sailors and working in seamless unison to keeping everything safe and most importantly an experience for all those onboard.

I am sure my blood pressure has leveled out, as I am allowed to sit back and explore the technological craftsmanship of the yacht and dare I say I am actually enjoying the sail back into the harbour, disappointed my afternoon sailing experience is nearing an end. I spot our wharf and the gaggle of tourists and Sydneysiders who flock to admire the mighty AUS21 glide toward its berth dominating the skyline with its mast and sleek composition dominating its smaller neighbors. Feeling triumphant and confident I know this is an experience I’ll not soon forget, I am no longer terrified. Until however I am invited to participate in the Sydney Harbour Yacht Club fleet race, battling head to head against 40 odd other racing yachts. Touted as the Formula One on water this level of racing is perhaps more for the adrenalin-propelled sailor who revels in strategy, agility and competitiveness. Luckily I am due to fly back to Singapore the day of the race so maybe next time. And I say that in all honesty. Maybe next time.