Described as ‘one of the world’s most amazing super yachts’, Adastra is 42.5 metres long, 16 metres wide and weighs 52 tons. 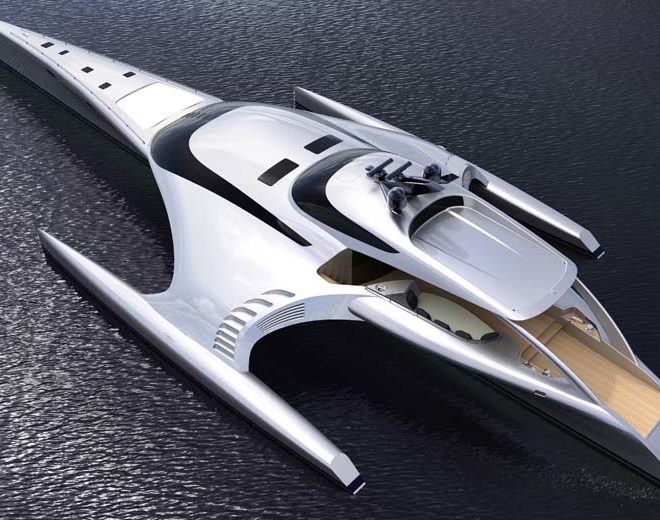 The Adastra, unveiled last week in China, is the new floating pleasure palace of billionaire Anto Marden who commissioned its construction five years ago.

Designed by Sussex-based yacht designer John Shuttleworth, the Adastra was built in Zhuhai, China  at the cost of a cool $15 million.

The striking trimaran has an integrated ship monitoring system, and can even be controlled with an Apple iPad within a 50-metre range. With a length of 42m, it has a maximum speed of 22.5 knots, weighs in at 52 tonnes and has the capacity to host nine guests – with room for up to six crew members.

Adastra has been described by Boat International as “one of the world’s most amazing super yachts, that could spell the future for efficient long range cruising”. Adastra’s 16 metre beam creates a spacious saloon area on the main deck which offers superb views through a panoramic window and accommodates a lounge area, dining table, and navigation station.

A forward facing door through the saloon window gives easy access to a large sunbed on the foredeck. The aft deck has a sofa and bar area to port and a dining area to starboard, further aft of this there is space for a 4.9 metre tender and directly below is a garage which can store a 3.1 metre tender.

The garage door has been designed to fold out and create a large dive platform. Extra space has been created below deck by slightly flaring the central hull just above the waterline. This area has been split into two sections with a full-width master cabin located aft with access from the deck saloon, and two further guest cabins, accommodation for the crew, and the galley located forward of the engine compartment. The main helm station, which has seating for two, is positioned in a raised pilot house situated between the aft deck and the saloon area and forms part of the cross beam structure. The Superstructure is carbon fibre with Nomex honeycomb core, the hull is Glass/Kevlar foam sandwich and the interior is light weight oak cabinetry using honeycomb panels. To help reduce weight, virtually every aspect of the boat is custom built. This includes carbon fibre hatches, portlights, ladders and even hinges, which are all built specifically for the vessel. Anto Marden, who is based in Hong Kong and made his fortune in the shipping industry, will be able to sail the state-of-the-art boat between the two islands he already owns off the coast of Indonesia.