One of the first models launched under Sunseeker CEO Andrea Frabetti, the Predator 60 Evo is moving the British builder in a fresh direction.

The ‘Evo’ label has been applied to cars over the years  to demonstrate major breakthroughs in specific models. Sunseeker is using Evo – short for Evolution – on its new Predator 55 and 60 models to show the rapid transformation of the brand. 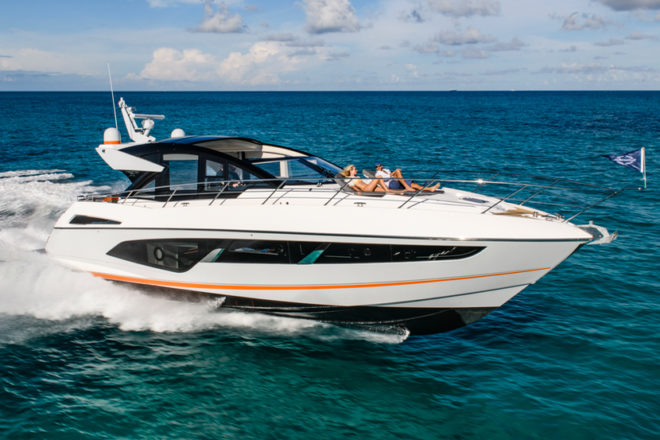 The Predator 60 Evo made its North American debut at the Fort Lauderdale International Boat Show late last year and was displayed at the Miami Yacht Show this February. We had a chance to run the boat after Fort Lauderdale, before spending time in Miami with Sunseeker CEO Andrea Frabetti to talk about the new design.

The boat shares the same hull as the older Predator 57, but its interior and cockpit are via Frabetti, and give a glimpse of the future of the brand.

The Italian was hired as Sunseeker’s Chief Technology Officer in January 2019 and was promoted to CEO in June. He brings a unique skill set to Sunseeker, having been the chief designer for Ferretti Group brands for 25 years, including Sunseeker’s historic competitor Riva. 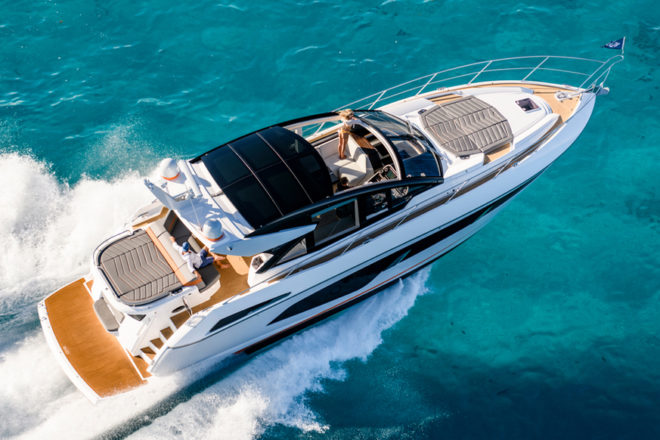 Shortly after he joined Ferretti Group in 1985, Frabetti became the chief protégé of Norberto Ferretti, long considered a pioneer in yacht innovation. By the time Frabetti left, he had designed over 300 yachts and developed then-radical technologies – like through-hull windows and stabilisers – that are standard features today.

“More than any other brand, we saw Sunseeker as the most innovative among our competitors,” Frabetti says. “We had a lot of respect for them, and there was much back and forth in new designs over the years as we fought it out. I can’t recall how many times we discussed what Sunseeker was doing and how we would have to respond.”

Frabetti, who walks the Sunseeker docks in Poole every morning to see how his boats look in the water, seemed an unlikely choice to lead his British rival. Then again, Sunseeker was always a different brand to its British competitors. 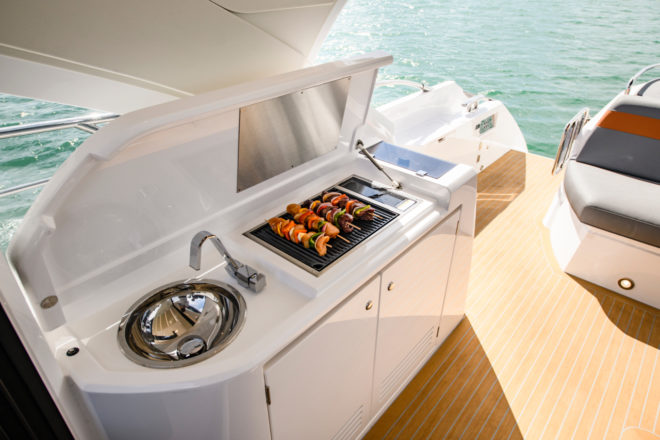 Founders Robert and John Braithwaite designed into their boats a Mediterranean spirit that made their yachts look as much at home in Cannes or Miami, as Southampton or New York.

The Predator 60 Evo, the first Sunseeker launched with Frabetti’s imprint, also marks the unofficial passing of the design torch from John Braithwaite, who retired from Sunseeker in mid 2018.

The 60’s long profile, with an orange racing stripe along the hull sides and an aggressively curved superstructure, shows how Frabetti has retained the Predator’s DNA. The interior, however, is completely new, with many features showing his love for the small details that define modern yachts. 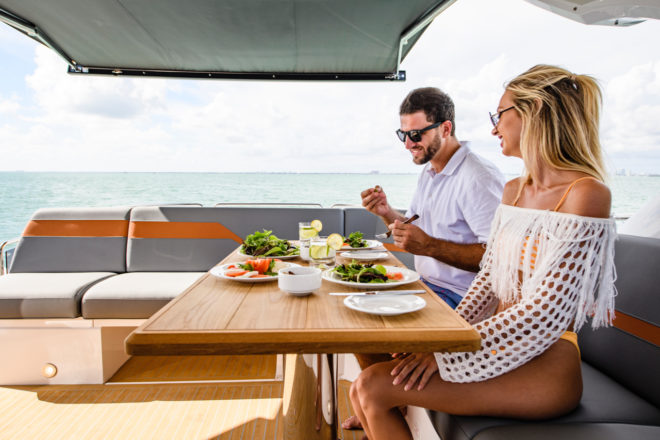 The submersible aft swim platform has a transom seat, so it can double as a beach club, while the garage houses a Williams Sportjet 345 tender that can be launched and retrieved without having to manhandle it. The boat also has a single crew quarter designed into the transom, if the owner doesn’t want to be the operator.

The main-deck cockpit makes full use of the 4.7m beam, with a large U-shaped lounge to port, starboard exterior galley with grill, fridge and sink, and the rear docking station. A two-person sunpad, positioned above the tender garage, connects to the saloon. The bow also has a large three-person sunpad, with lifting backrests.

One of the major differentiators of this Evo from competitors is the large drop-down window that separates the cockpit and interior. When the window’s down, with the side door open, the deck becomes one expanse of open space from the cockpit to the helm station, all sitting on the same level.

The massive overhead glass panel is the second major innovation. It’s a full carbon-fibre structure with six glazed panels that retracts above the windshield to turn the protected saloon into an open-air space. With a push of a button, the coupe becomes an open boat. In bad weather or running at sea, the whole area is securely covered.

I ran the 60 for a few hours on South Florida’s Intracoastal Waterway (ICW), heading out into the Atlantic into 3-5ft seas. With its twin Volvo IPS 950s, the 60 Evo reaches a top speed of 34 knots.

That’s reasonably fast, but the most impressive feature of the hull is the ‘Hydro-Pack’ running surface, which increases water flow across the props for a smoother, more efficient ride. 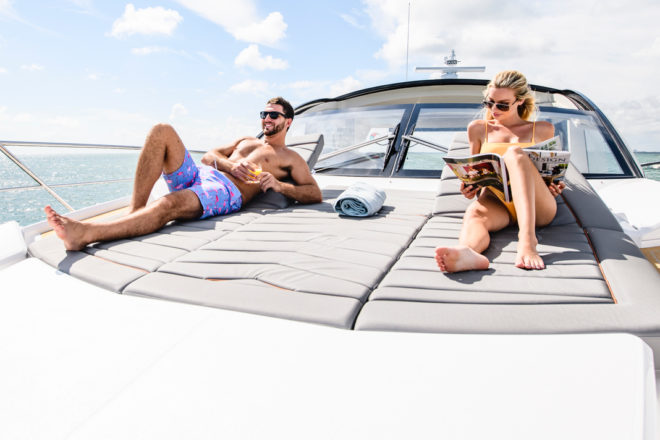 Once we left the ICW and got out into the Atlantic, I was happy to see the Sunseeker didn’t bang through seas but rode up and over, without the vibrations or mysterious noises you often hear on other boats. Given the confused seas, it was a smooth ride. The 30-plus- gusts and whitecaps outside our little bubble felt like we were watching a movie.

The Evo is the first Sunseeker to adopt two Simrad evo3 touchscreen displays that allow the driver to control onboard functions without having to search for dozens of buttons or switches. It is much less cluttered, with a more automotive feel. The saloon has white sofas, a black foldout table and a helm with leather bucket seats

The helm area has two large, leather bucket seats, slightly reminiscent of a performance automobile, that demonstrate the heritage of the Predator brand but show Sunseeker’s fresh focus on luxury.

A teak footrest is positioned along the bottom of the helm, but there’s an even larger teak platform under the seat that folds down to let the driver stand, with their head above the windshield, and run the yacht like a sportboat with the overhead hatch open. Dozens of small but stylish details like these define the 60 Evo.

The white fabric of the lounge has a high-quality tweedy texture, with black piping and intricate stitching. It fits well with the black foldout table. 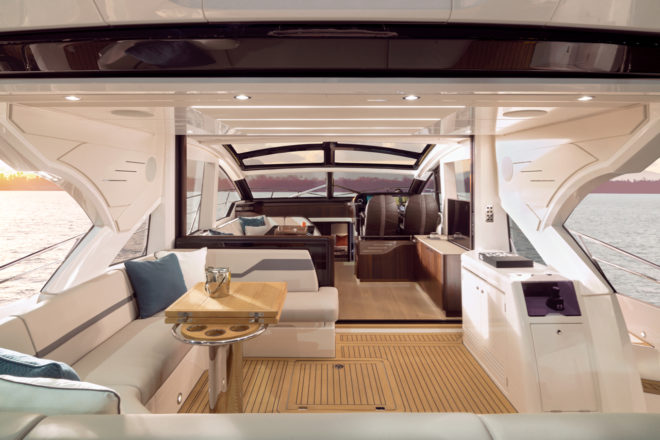 When the cockpit window is lowered and the starboard door is opened, the cockpit and saloon combine to form a large and attractive living area

The Eucalyptus woodwork across the interior is stylish but subtle. At the rear of the saloon near the hardtop is an off-white, arrow-shaped piece that has no other function than to look as if it’s a continuation of the aft cockpit, in order to visually unite the two areas. Again, details matter on this boat.

Below decks, the open galley has white Miele appliances, Eucalyptus cabinets and stainless-door handles that have been milled, another thoughtful detail that gives the impression of being on a much larger, more expensive boat. Other railings and handles are made from pure carbon-fibre to reflect the boat’s performance heritage.

The three-bedroom layout includes a VIP with ensuite in the bow, twin berths amidships and an expansive full-beam master at the stern, with a side settee, in-wall television and generous headroom. 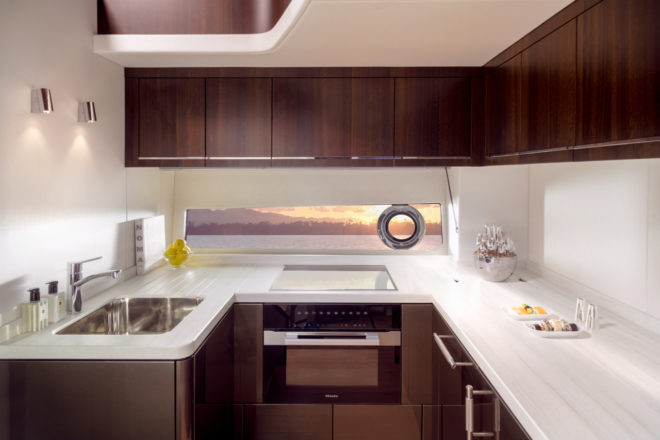 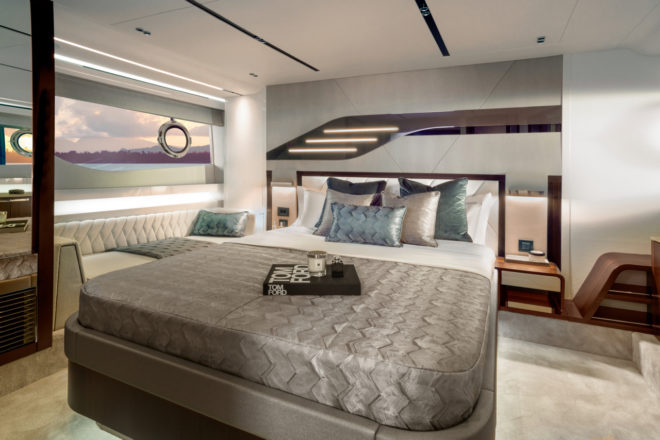 Frabetti wanted the new Predator Evo series to appeal to a younger buyer than its Manhattan line, so he also included artistic flourishes like stainless-steel stripes in the doors, a sculptural headboard with LED lighting above the berth in the VIP suite, and even an art-deco wooden bookshelf beside the bed in the master suite.

The grain in the dark marble of the heads is also beautiful. Functionally, features like these are unnecessary, but they give a sense of the new direction that Sunseeker is heading.

The 60 Evo is a very strong debut for Frabetti, who keeps in touch with John Braithwaite, who was active in Sunseeker’s design department up until his retirement. Frabetti asked Braithwaite, whom he considers an industry icon and personal hero, what he thought of the new generation of Sunseekers.

“He gave me a thumbs-up,” says Frabetti. “That’s the best response that I could’ve ever gotten.”