Plvs Vltra proved a practical, sophisticated long-range voyager after the Amels 242 cruised the Pacific and Indian Oceans, plus Asia’s seas and straits.

Cruising the Pacific and Indian Oceans, plus Asia’s exotic seas and straits, has established Plvs Vltra as an ultra-practical and superbly sophisticated long-range voyager of the Amels Limited Editions fleet. Another three semi-custom 242s have been sold in her wake, and a fifth such vessel is building. 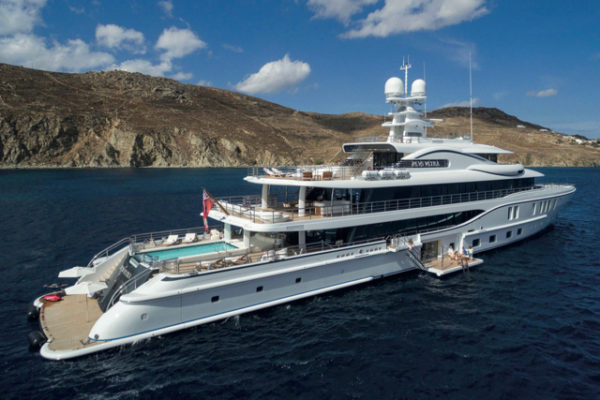 A complete owner’s deck under the bridge is complemented by two VIP suites on the principal deck and three lower-deck guest suites; Photos: Jeff Brown

This beautifully-outfitted 74m Amels, designed by Tim Heywood, has Winch interiors, and was handled by agents Moran Yacht and Ship, thus combining four of the world’s most advanced superyacht specialists.

Add an experienced owner who possibly predicted his future course with an earlier Amels Limited Editions 180 called Step One, delivered in 2012, and Captain Simon Truelove as both build and passage-making skipper, and this first Amels 242 was sure to become a benchmark when she made her debut a little over two years ago.

Truelove has since sailed a relatively trouble-free 38,000nm, and the owner’s family and guests have been aboard Plvs Vltra at many of the locations visited during her circumnavigation.

Their Pacific sojourn began in French Polynesia and continued to New Zealand, Australia, Indonesia, Singapore and Phuket in Thailand by late 2018. Then came the Seychelles and other Indian Ocean island groups.

The vessel’s name Plvs Vltra means ‘further beyond’ in Latin, and it “crystallises the owner’s uncompromising quest for perfection,” says the yard.

“The ancient Pillars of Hercules, near the Straits of Gibraltar, were said to mark the gates of the known world, with nothing further beyond, or nec plvs vltra. For those with exceptional daring, ambition and talent, voyaging past the gates – plvs vltra – became a motto for unsurpassed achievement at the very highest level. Plvs Vltra is just such an achievement.” 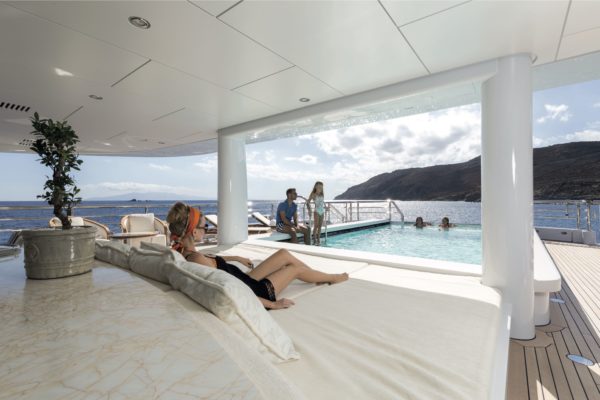 The pool has a counter current to enable lap swimming, but does not dominate an enormous entertainment space that leads into the salon and dining areas

Amels’ hugely successful Limited Editions concept is by now well-known. Based at Vlissingen near The Netherlands-Belgium border, the yard began building full-custom superyachts when they came into vogue in the 1980s and 1990s, and it still offers such services.

Many would-be owners wanted faster deliveries, however, so Heywood, once a partner of the late, great Jon Bannenberg, was asked to create a timeless exterior hull style within which the complex engineering aspects of a superyacht could be pre-fitted, reducing build times from four years to only two.

Amels is itself owned by the enormous international Damen shipbuilding group, so finance for this system was not a problem. Limited Editions are presently available in 180, 200, 206, 220, 242 and 272 feet lengths, with the larger vessels only added in recent years.

Interiors can be custom-outfitted to a high degree, and Heywood’s gently curving original designs are ever-evolving, so that his profiles too may have a distinctly individual appearance.
In Plvs Vltra’s case, jet-black paint is used for highlights in the curved wing station and mast area, as well as in a bow-to-transom superstructure line and stern section, which nicely complements the predominantly pure white hull.

“She looks strong. She is built to travel the oceans, you can see that,” says Heywood. “I am very pleased with how she has turned out. The streamlined profile is quite unique and very recognisable. You can spot her instantly when she is in a marina.”

The owners kindly gave Yacht Style permission for a further review of this vanguard vessel as she cruised Southeast Asian waters, and they were actually still talking fervently about French Polynesia and the Society Islands, from Marina Taina in Papeete to Bora Bora, and the Tuamotus. 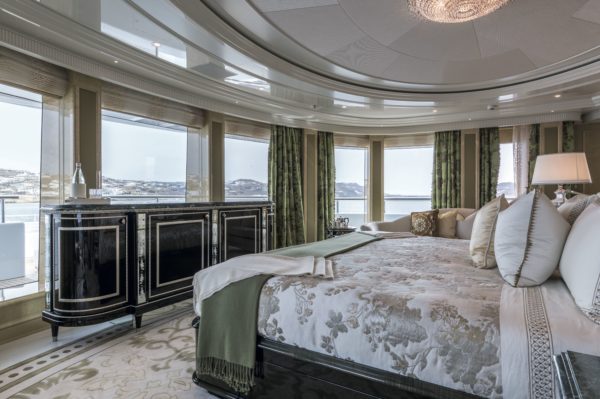 Raiatea, from whence the Polynesians sailed to settle New Zealand, and Tahaa within the same lagoon, also impressed, and there was talk of “the fragrance of Tahitian gardenia and vanilla beans in the air”.

Plvs Vltra has a complete owner’s deck, with a forward-facing suite that offered panoramic views of long Pacific swells breaking over the barrier reefs, and of many uninhabited islands or motus with their lush tropical flora and coconut groves.

Her two 9.5m tenders were used to visit isolated beaches and sandbars rising from warm cobalt seas, and a stunning array of fish were on display, often in the vicinity of sunken shipwrecks or downed WW11 aircraft.

Pausing in Phuket before the present Indian Ocean sojourn, it was obvious that a lot of thought had gone into this vessel, which apart from a sky lounge and the owner’s deck has two VIPs on the principal deck and three guest suites on the lower deck.

One of the most interesting design aspects is that the extensive spa and beach club are amidships rather than aft.

There is still a large swim platform, and regal transom stairways leading up to a 180sqm “entertaining extravaganza” on the principal deck, whose centrepiece is a 6.5m pool that has current-creating jets to enable lap-style swimming. 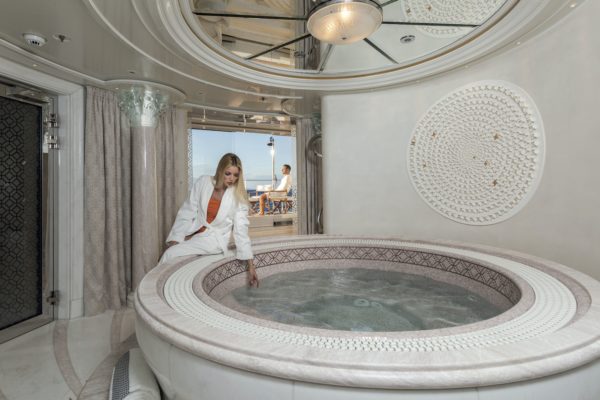 The pool is central, without being dominant, and moving forward, this deck opens into the formal dining room and salon.

However, Plvs Vltra’s beach club and wellness spa are located “in the most comfortable and stable part of the ship”, amidships, and comprise a full-beam 75sqm space devoted to relaxation and pleasure.

It has a jacuzzi, sauna, hammam, massage room and a nail-hair studio, with various marbles and shell patterns featured. There is a shower, bath-dressing room and day head, and the whole area, meant for long languid stays rather than in-and-out appointments, is rather reminiscent of Roman baths.

Access is from the central staircase and elevator, and for guests staying in the lower deck suites, the adjacent beach club and the sea are just a few steps away, formed by a large platform to starboard opening out over the water.

This space has the same lower deck windows as in the guest suites, and natural light pours in. Even the sauna has its own window. External stairs also allow access from the main deck.

In practice, sea conditions may affect usage here, but no more so than if the set-up was aft, and in fact less so according to the Captain, who says that the vessel’s zero-speed stabilisers have not been needed frequently. The owner and his wife were heavily involved in the interior outfit, says Winch Design’s Jim Dixon.

“We discussed an eclectic mix of influences from classic French Riviera, art deco and contemporary styles. The owner was inspired by Versace, as well as the extravagant objets d’art and marble floors at the Hotel Georges V in Paris,” says Dixon.

“Everything is bespoke, and overall the impression is nouveau classical, a fresh take on Cote d’Azur grandeur. There is a lot to feast the eyes on, but it is also gentle and relaxing to be in. Blues and yellows are the tones reflected in the pastels and patterns of the soft furnishings.”

Some out-of-the-box solutions have been found for more challenging decor. For example, the ornate crystal chandeliers that adorn the salon and dining rooms have their thousands of individual crystal droplets secured by an equal number of tiny fixed metal pins, rather than allowing them to be free-hanging.

Amels’ expert naval architecture ensures the vessel has the latest advances in seakeeping and manoeuvrability, as well as very low noise and vibration levels. Better location and insulation of the generators aboard Plvs Vltra, for example, was first tried in the Australian-owned custom Amels 74m Ilona, and other state-of-the-art techniques and materials are constantly being upgraded. For further information, visit: www.amels-holland.com

Note: This article features as the cover story in Yacht Style, Issue 46