Tesla Motors has opened its first retail design store in the UK at London’s Westfield Shopping Centre in White City, known as one of the capital’s most popular shopping destinations. 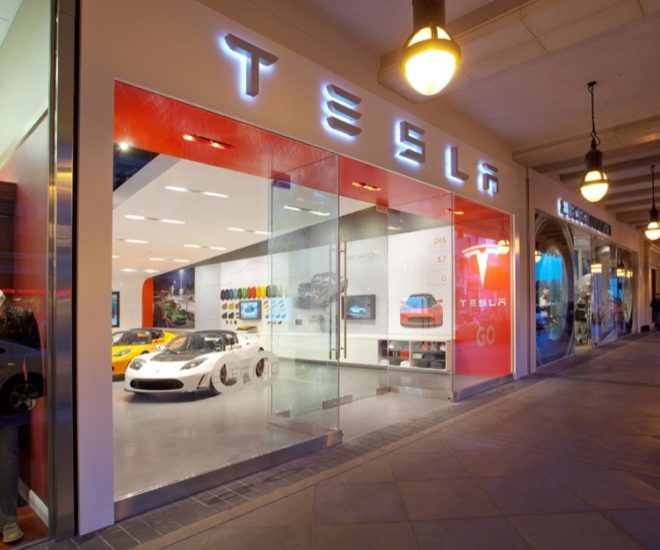 Located in the Westfield shopping center, the Tesla design store, the first of its kind in the UK was officially openrd by the company’s co-founder and CEO, Elon Musk who also confirmed that first right-hand-drive version of its Model S will hit UK roads in March 2014.

“Tesla is taking the UK market very seriously, and there are more stores and service centers to come. We’re also going to establish a Supercharger network so Model S customers will be able to drive long distances anywhere in the UK using our network for free, forever.”

“The first Supercharger will be energized next quarter and we’ll aspire to have the entire country covered by end of next year. Most importantly, we are hard at work with Right Hand Drive Model S, and we aim to deliver the first one by the end of March 2014,” he said.

As well as showcasing the existing cars and technology, the design store offers consumers the chance to design and customize their own Model S and to learn more about the company’s electric engines.

Since arriving in Europe in August, Tesla has wasted no time establishing itself. As well as building a supercharging network in the UK, Tesla has pledged to offer similar networks throughout the continent.

By the end of 2014, 100% of the population of Germany, Switzerland, Belgium, Austria, Denmark, the Netherlands and Luxembourg, will also live within 320 km of a Supercharger station, (the car’s driving range) where they will be able to recharge their Tesla free-of charge for the life of the vehicle.

And it’s the combination of the company’s battery technology and commitment to recharging stations that makes it such a formidable force.

The Tesla can travel 500km on a single charge and, when plugged into a special Tesla Supercharging station, battery power reserves can be topped up by 50 percent in just 20 minutes. Other electric cars need to be left overnight to charge the batteries.

During the Tesla store’s official opening, the company confirmed that the entry-level UK edition of the Model S will cost £49,900 (€60,000).