It’s the flying car you have always dreamt of and now you could have one to call your own. 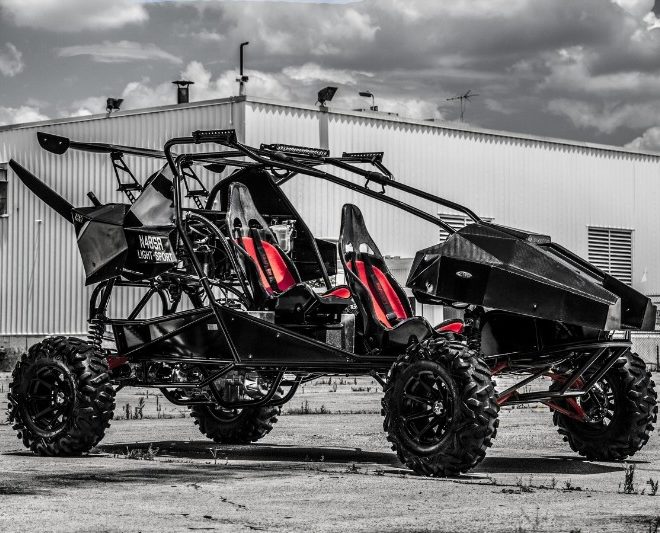 It is certainly a far cry from the flying cars we saw in the “Jetsons” but the SkyRunner MK 3.2 all terrain vehicle comes pretty close. Made by a small company that is based in Los Angeles, the vehicle has been awarded the S-LSA classification by the American Federal Aviation Administration making it a legally recognized light aircraft.

Utilising the feedback from multiple avenues such as the US military, extreme sports fans, light aircraft enthusiast, off-roaders and even social media, the Skyrunner can be mistaken for an off-road go-kart at first sight. The exoskeleton is made of exposed tubular steel with carbon fiber and aircraft grade aluminium panels. The only give away to its true capabilities, is the large rear-mounted propeller.

The car can reach a maximum height of 10,000 ft and maintain a speed of 45mph (72km/h). Manuvering the car in the air is fairly simple. Toggle left or right to steer and drop or raise the accelerator pedal to ascend or descend. “This is one of the most significant milestones in our company’s history,” said Stewart Hamel, SkyRunner’s CEO and Founder.

Though only this week attaining full certification, the SkyRunner has been in development and testing for several years, winning a host of fans in the process. For example, Dan Johnson, President of the Light Aircraft Manufacturing Association, called the vehicle: “A full-on macho pulse-pounder that catches the interest of people.” And now that it is fully certified, full-on production can begin and a backlog of existing orders can be cleared. “This airworthiness certification is monumental, as it now triggers serial production, creates jobs, and makes for happy customers,” said Daryl Ballard, SkyRunner Shop Foreman.

A stock SkyRunner retails for $119,000 but there are also a host of optional extras, from carbon fiber racing seats ($1,899) to a set of augmented reality driving and flight goggles that offer a head up display and facial protection ($750). And for those that live in areas that suffer extremes of weather, from torrential rain to heavy snow, the car can also be specified with pro caterpillar tracks for an extra $5,200.