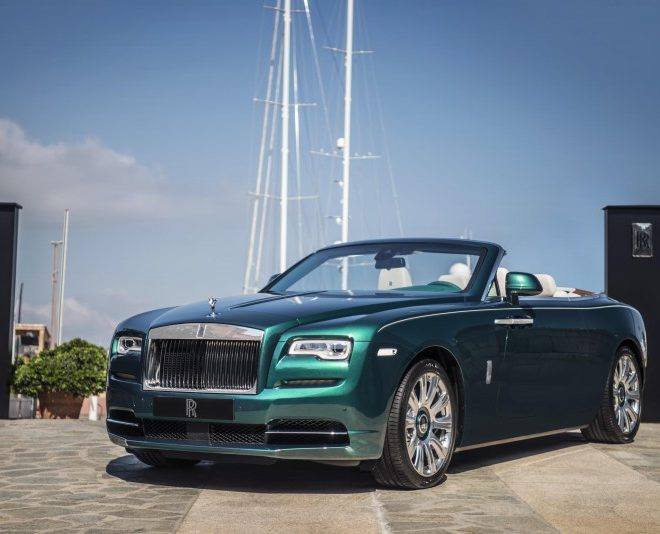 It is easy to see Porto Cervo’s charm, especially to a top-shelf automaker such as Rolls-Royce. The swanky seaside resort destination in Northern Sardinia boasts a spectacular coastline, lots of beautiful people and a laidback glamour like no other. Rolls-Royce even has a special initiative related to Porto Cervo, which we have covered previously. No surprise, then, that Rolls-Royce is returning to the Italian marina as palette inspiration for ‘Dusk Until Dawn’ – a bespoke series of two of its well-loved cars, a Dawn drophead and a Wraith coupe. Revealed at the brand new Rolls-Royce Summer Studio in Sardinia, both cars are infused with the ambient hues of Porto Cervo at its most spectacular: dawn and dusk. As its name suggests, the bespoke Dawn (pictured above) is a vision of the marina’s aquamarine waters as light breaks upon the waves. An ethereal emerald green exterior envelops a seashell and green leather cabin, complemented by teak trimmings (yacht decks, anyone?) that extends to the tourneau cover that shields the roof and trunk compartment. With an insignia of Porto Cervo on the dashboard fascia that’s embedded with real emeralds and mother-of-pearl in white gold, this Dawn is undoubtedly one of the most luxurious vehicles in the world. For the one-off Wraith, an iridescent two-toned silver finish on its exterior reflects the changing light as the sun sets, setting the mood for its ethereal twilight-infused interiors. Step inside to a cocoon of glamour with seats swathed in decadent plum-colored ostrich leather and wooden veneers and marquetry in shades of slate greys, browns and black. “Patrons of our marque delight in inhabiting some of the world’s most beautiful enclaves,” said Isobel Dando, General Manager, Future Retail, Rolls-Royce Motor Cars. “The stunning Bespoke Wraith and emerald embellished Dawn, inspired by the sights and colors of Porto Cervo, have been commissioned in the spirit that so many of our customers delight in.” It’s also somewhat fitting that the British car marque extends its bespoke reveals to one of its clients, tattoo artist Mo Coppoletta, who used Sardinia’s stunning environment as inspiration for two tattooed Rolls-Royce headrests. “The designs I have created for Rolls-Royce evoke the emotion experienced by observing this magical place from the harbor of Promenade du Port,” Coppoletta said.