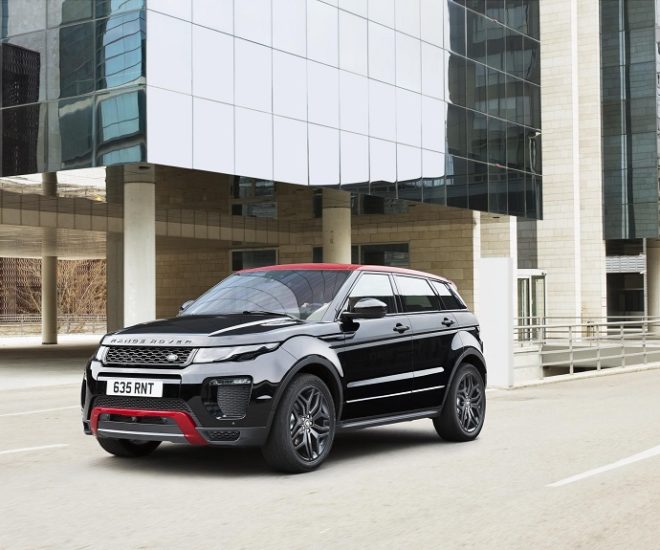 The Range Rover Evoque has enjoyed considerable success as one of the world’s finest luxury compact SUVs available, with 182 international awards, and more than 520,000 models sold. To celebrate that, Land Rover is styling up a new limited edition with ramped up technology, and a special color scheme. The Ember edition of the Evoque sets itself apart from the rest in terms of its pure exclusivity.

The title gives an idea of the feeling – the black of ash juxtaposed against a few glowing wisps of red. A black sheen is present across the wheels, exhausts, and grille, while the roof is a ‘Firenze’ red. The interior has the seats trimmed in black leather with contrasting red stitches. The floor mats and carpeting continues the theme. “We wanted to give the Range Rover Evoque Ember Special Edition a sporty feel; contrasting the intensity of the Firenze Red with Santorini Black really shows off the Evoque’s stand-out proportions” said Phil Simmons, Land Rover’s Studio Director for Exterior Design Realisation. Part of this effect is also achieved by the tech, such as the special type of launch control that allows the driver to pull away quickly on slippery surfaces like ice, grit, and sand.

The infotainment system – the InControl Touch Pro – is an overhaul, complete with high-definition widescreen touch-sensitive display. Like a tablet or smartphone, you can pinch-to-zoom, tap, and swipe controls in an intuitive way. For easier navigation, the system works in sync with the Land Rover route planner app so that information can be sent between a handset and the car simply. The entire route, including the distance from the parked car to a final destination, is mapped out.

While the Ember is only aimed for a limited run – available to order only for three months this summer – Land Rover isn’t letting the technology slide. The InControl Touch Pro system and low-traction launch control feature are set to become standard equipment on HSE models and an optional extra across the rest of the Evoque range later this year. This release has Land Rover set on stoking the flames of desire for the next couple of months.