When AMG brings its magic to a standard Mercedes model, the keywords are usually power and performance; things are a little more complicated here. 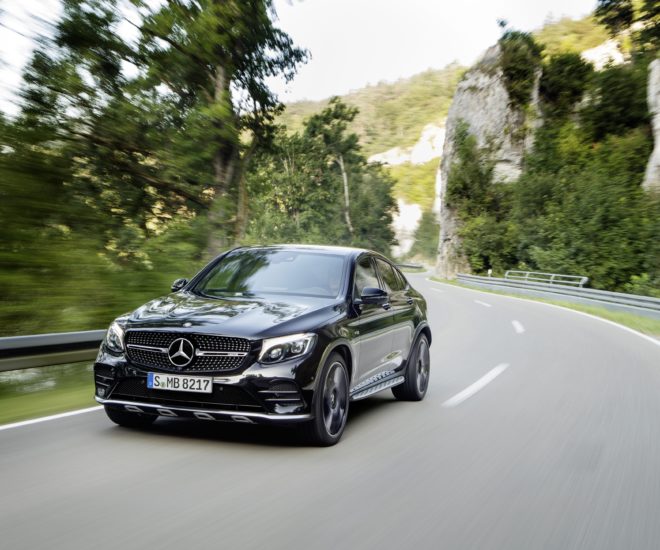 When AMG brings its magic to a standard Mercedes model, the keywords are usually power and performance; with the Mercedes-AMG GLC 43 Coupé, things are a little more complicated. The latest Mercedes SUV to get the AMG tuning treatment won’t break any crossover land speed records but it won’t break the bank either.

The Mercedes-AMG GLC 43 Coupé is propelled by a 3-liter twin turbo 367hp V6 engine that sends its power through a nine-speed automatic gearbox to all four wheels. That is perfectly respectable, if prosaic, for an AMG-treated vehicle. This power plant and power train result in an admirable 0-100km/h time of 4.9 seconds and an electronically limited 250km/h top speed.

In isolation, those numbers are impressive but when this new variant of the GLC Coupé makes its official debut at the Paris motorshow in October, it will do so alongside the latest Porsche Macan. Also announced last week, the Macan Turbo with performance package offers similar interior space and four-wheel drive, but its twin-turbo V6 serves up 440hp, a 0-100km/h time of just 4.4 seconds and a top speed of 272km/h.

But before those in the market for a sporty SUV start Googling ‘Porsche Dealership’ the Mercedes has Porsche completely beat in two important ways.

First this is a Mercedes and therefore at the cutting edge of luxury and of latest-generation driving tech. Admittedly, if you’re not a fan of the Mercedes way then this point makes little difference but the second point may yet win you over. Though prices for the GLC have not been confirmed yet, it will cost roughly 30% less than the new €91,000 Porsche.

This means that, according to Tobias Moers, Chairman of the Board of Management of Mercedes AMG GmbH: “The Coupé is able to appeal to new target audiences.”

In times gone by, the AMG badge meant a massive, supercharged V8 or a monstrous V12 under the hood. But regardless of cylinder count, those three letters signified the pinnacle of performance possibility.

However, in an attempt to bring AMG’s engineering excellence to the Mercedes masses, since the beginning of 2016, the company has started offering two AMG variants (63 and 43) of new models with either eight or six cylinders calling the shots – think the difference between full cream and semi-skimmed – meaning that the calorie count is lower but the taste is still the same. Something that Moers highlights.

“The new GLC 43 4MATIC Coupé is characterized by a high level of agility and sporty driving dynamics,” he said.

Creating two AMG variations of each new model also means that the best (from a performance perspective) is still to come in terms of the GLC Coupé range at least. And that model will be a statistical match for any Porsche Macan or BMW X4.