Crowned the ‘Giant Killer’, this diminutive mid-engine roadster is making a comeback with the prestigious automotive seller, Auxietre & Schmidt. 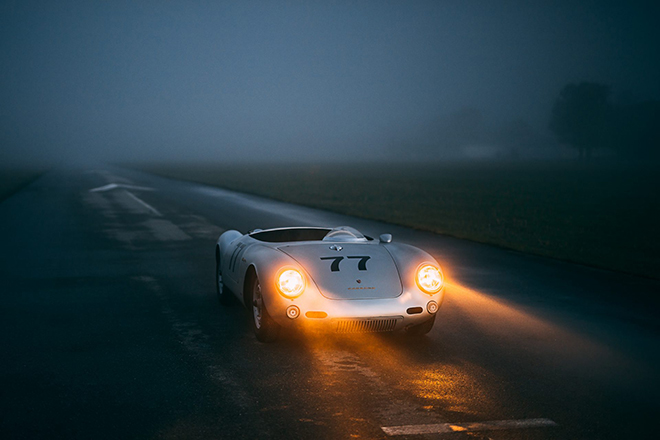 Lionized for positioning Porsche firmly on the map as a serious competitor on international race tracks, this 1955 Porsche 550 Spyder is making a comeback with the prestigious automotive seller, Auxietre & Schmidt. Crowned the ‘Giant Killer’, this diminutive mid-engine roadster has long proven its ability to defeat an array of formidable competitors. First introduced at the Paris Auto Show in 1953, the 550 and its second iteration, the 550A, remained in production through February of 1959, accumulating a total of 130 constructed chassis before the invention of the 718 RSK Spyder. Built on a frame of seamless mild steel tubing, the 550 briefly utilized a front suspension of double trailing arms and transverse-leaf torsion bars, before the rear suspension was redesigned from leading control arms to trailing arms with swing axles and tubular transverse torsion bars. First purchased by Jim Cook, this 1955 Porsche 550 Spyder was completed on 28th June 1955 and delivered to the US west coast with the updated body design. As one of only 90 examples marked by a 550-0050 chassis, this car was originally finished in silver paint with a black interior. Raced alongside C. Pitt Browne up till 1965, this classic beauty was passed through multiple expert hands, where it was kept in mint condition, and even received an unimaginably meticulous original restoration. Complete with hundreds of photographs, correspondence letters, and a detailed racing history, this 1955 Porsche 550 Spyder has not seen the light of day up till now.