Crystal Cruises Takes to the Air

The award-winning luxury cruise service looks to widen its reach beyond the sea. 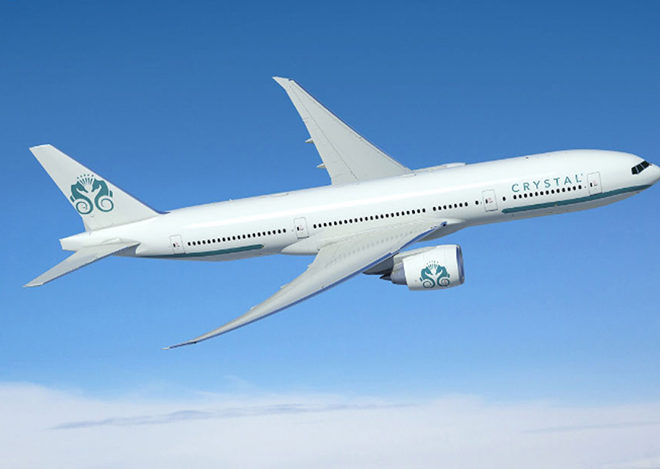 Not being satisfied with racking up countless awards for its cruise services, the luxury cruise brand Crystal Cruises announced plans to expand their fleet of ships with Crystal Luxury Air. This month, the company’s 12-seat Bombardier jet will lift off for the first time, taking passengers anywhere around the world.

The Global Express XRS jet features sleeping quarters, leather seating, cabin configurations for business, conferences and lounging. Furthermore, set up for a launch next year, are the Crystal Luxury Air’s Boeing 777-200LR and Boeing 787-8 Dreamliner. Both jets are being redesigned to feature lie-flat beds, and first-class amenities. The Dreamliner, for instance, typically seats up to 300 passengers but will be reconfigured to fit just 52.

The two Boeings will offer 14- and 28-day around-the-world trips with stopovers in both cosmopolitan and remote locations around the world. Trips include accommodations at luxury hotels, Michelin-starred meals and local entertainment.

Also released were details on their newest world tour to launch in 2019. The tour will set off from Los Angeles and sail to Hawaii, Australia, New Zealand, South Africa, and the Mediterranean over three months.

You can check out Crystal Cruises’ site over here.