The oak chair used by the novelist billionaire was sold in New York for 14 times the price it last fetched at auction. 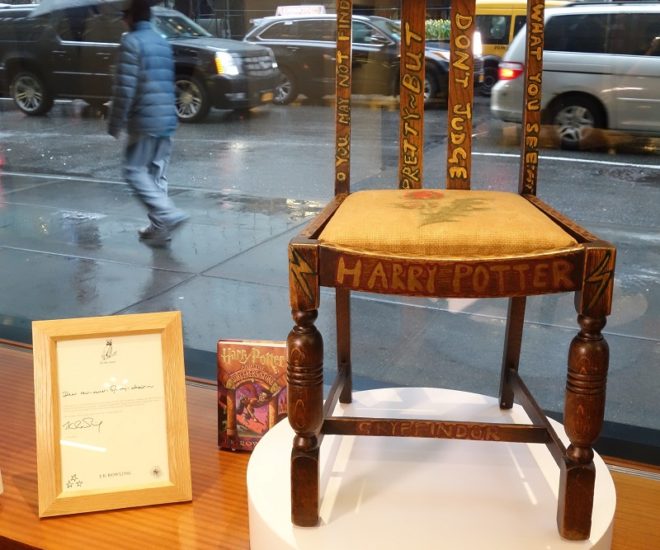 The chair J.K Rowling sat on as she churned out the Harry Potter series has sold at auction for $394,000, some 14 times the price it last fetched at auction in 2009. The modest 1930s-era oak chair, part of mismatched set of four was sold in New York, in an auction we reported on in the previous version of this story. Adorned all over the chair are words in pink, gold, and green paint. Pre-bidding for the chair over the net reached $65,000 earlier this week.

“This was the comfiest one, which is why it ended up stationed permanently in front of my typewriter, supporting me while I typed,” Rowling wrote in a letter accompanying the chair that Heritage Auctions, the house in charge of the sale, placed on their website. “My nostalgic side is quite sad to see it go, but my back isn’t,” she added.

The words written in paint includes her signature, and the words “You may not find me pretty but don’t judge what you see” on the back rest, and “I wrote Harry Potter while sitting on this chair” on the wooden frame around the cushion. The front legs are also marked by lightning, invoking the famous lightning-scar of the boy wizard, painted on it.

Rowling donated the chair in 2002 to an auction benefitting the National Society for the Prevention of Cruelty to Children after adding the paint. The chair sold at auction again in 2009 for $29,117, Heritage Auctions said.

The Harry Potter series has been translated into 67 languages and sold more than 450 million copies, as well as become  a series of box office record-breaking films that made Rowling the first female novelist billionaire. Perhaps just a little bit of that writing magic may be left inside the chair for the next hopeful author who uses it. At the price it fetched though, we are quite sure the current owner (no names are forthcoming) is something other than a struggling writer…