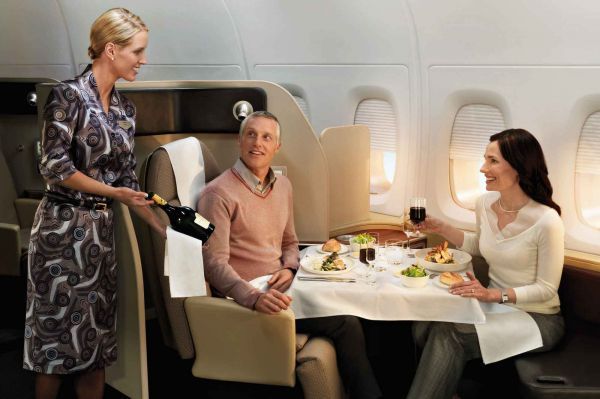 Australian carrier Qantas has the world’s best on-board wine selection, according to the Cellar in the Sky Awards presented February 9.

Best First Class White went to Brazil-based TAM for their Michel Picard Puligny-Montrachet 1er Cru Les Chalumeaux 2006, whilst the best First Class Sparkling was awarded to German airline Lufthansa for the Piper-Heidsieck CuvÃ©e Rare it serves on board.

Charles Metcalfe, a British TV host and Chairman of the International Wine Challenge, presented the awards, praising the broadening cellars on board today’s aircraft.

“Airlines are having to be more creative with their wine choices,” said Metcalfe.

“Rather than choosing an expensive and well-known label, they are choosing lesser-known but much more interesting wines.”

The Business Traveller Cellar in the Sky competition has been running since 1985 to determine the highest quality fine wines available in Business and First Class on board the world’s flights.

The jury, which was composed of Metcalfe and four other wine critics, judged entries from 34 airlines to choose the winners.

The Business Traveller Cellars in the Sky Awards 2009

Data from Business Traveller Cellar in the Sky Awards – Website